I chose three photographs rather randomly and yet I have seen all of them before. The photograph made before 1940 (in black and white) is a portrait of Frederick Douglass taken with a Daguerrotype. The second photograph is a background photo-journalist/ documentary type photo of John Kennedy in Hyannis Port before getting interviews for CBS in September 1963. Finally, the recent personal snapshot photo is a photo of a landscape I took when I was vacationing with my family in Duxbury, Massachusetts. 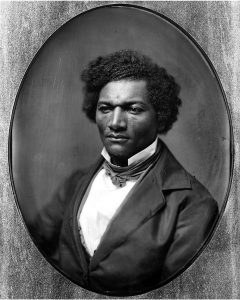 The portrait of Frederick Douglass has a rather interesting background story to it.  The Onondaga Historical Association loaned the full-plated daguerreotype of Douglass to the River campus Libraries at the University of Rochester in April of 2016. The speculation around this photograph is precisely because the photo is rather odd- it’s a 61/2 by 81/2 inch which makes it the only known full-plated daguerreotype of Douglass, an escape slave who became one of the nation’s most prominent abolitionists (Empire Magazine). The photograph was taken at a convention held august 21 and 22 of 1850. Douglass is sitting at a table surrounded by other people. It is the only one of the nine known daguerreotypes of Douglass to be precisely dated. What interests me is how a former-slave could have been photographed this much during this time and how one was exposed or even possession of this new and expensive technology during this time. Douglass’ portrait is iconic and indexical in the sense that it represents the abolitionist in full detail, there is nothing left to the imagination. According to Empire Magazine, several things from this portrait stand out as “tokens”, specific to the time, place and material instances. For example, Douglass is glancing into the distance instead of directly looking at the camera- a portrait technique of the Boston studio was famed for. The critical focus of Douglass’ face is evidence of a specific kind of lens used by the Boston Studio because the lens is “positioned a little below center line so the camera is looking slightly up at Douglass” (Empire Magazine). 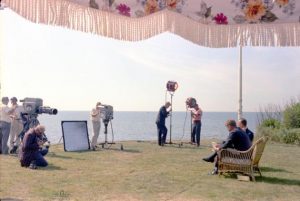 Kennedy’s photograph is much less manufactured, in the sense that there is no toying with the camera lens or making specific requests to have the camera angle a little to the left or right- it is a “true” photo- it takes everything as it is. It is a background snapshot, a behind the scenes kind of photo of Kennedy being interviewed by CBS Evening News Anchor Walter Cronkite to inaugurate the first half-hour nightly news broadcast in September 1963. The event itself is the first of its kind whereas Douglass’ photo is one out of 9 daguerrotypes- a replication rather than something revolutionary. The photo acts a symbol of the work it takes to put together an interview of this caliber- one famous news anchor with the president, a relationship that will soon die with the President’s demise only a few months later in Texas. The photo is not only symbolic but also a representation of an interface- there are different mediums at play in this one snapshot of a behind the scenes interview. There is the TV medium with the different cameras and recording devices that are transmitting the interview to the audiences into their living room and then there is someone taking the photo of these different mediums at play to create a snapshot; almost like someone taking a picture of a picture in a museum. There are different layers that are all in one “scene” so to speak. As such, this picture becomes a “type”, a genre that has been re-tokened into a different media. 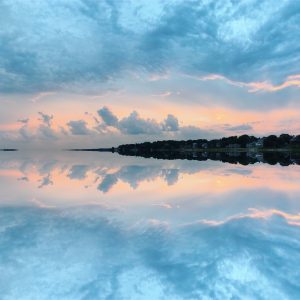 My personal snapshot is doctored or manipulated like Douglass’ portrait. It is not a true presentation of, in this case, a landscape, but rather what I want the audience too see from the landscape. I increased the saturation of the photo and used the “mirror” function on Instagram to change the way people would see the picture (also on Instagram). I wanted to create a ‘trippy’ element to my photograph, much in the same way as Douglass’ portrait has certain aspects that are not true to what he looks like- his blazer that he is wearing looks grey (even though it’s black) and his white shirt looks bright white (because of the different lens that was used). Even though the photography also is manipulated, the lens is not the one that has done the manipulation but rather other settings are to blame for this seemingly mirror-like landscape of land and water. In “Introduction to Photography and the Optical Image,” Irvine talks about the view of “the middle brow art form” where anyone with a photographic device can be a photographer. It becomes almost mundane for someone to alter a photo, post it on social media and wait for feedback in the ways of likes and comments (or none at all). Society is now dependent on people who post landscapes, brunches, social gatherings to create a kind of social anticipation or fever among audiences browsing the various social media platforms. Such photos become “cliches” or “stereotyped performances” where such performances become part of our ritualistic behaviors of posting something that you think people might like or looks pretty. It comes to a point where such postings are an after thought of the image itself- an the image is no longer the focal point of conversation but rather it’s the buzz of of the photos that takes precedence.