The word “reproduction” reminds me of the word “commodity” immediately. Last week, I happen to visit Hirshhorn to see the exhibition: “Brand New: Art and Commodity in the 1980s”. The 1980s was a seismic decade of global political shifts: the fall of the Berlin Wall in 1989; along with the demise of Communism; a soaring stock market until the Crash of 1987; and the rise of U.S. right-wing conservatism under President Reagan. Moreover, extensive technological advancement led to Cable Television, with its multiple channels, MTV and CNN allowing viewers greater viewing options, along with late-night television and personal computers all contributed to altered visual viewing and the way we received information. The change in the art canon shifted in the 1970s toward Post-modernism inspired by the rapid spread of Critical and Revisionist Theory. Additionally, the AIDS crisis surfaced in the 80s, the rise of multiculturalism, Feminism theory and the intensive product branding demonstrated by Nike and Calvin Klein advertising on cable TV. 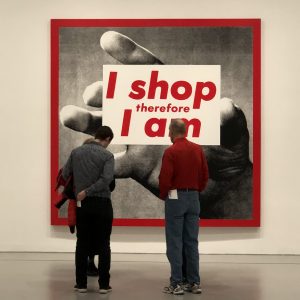 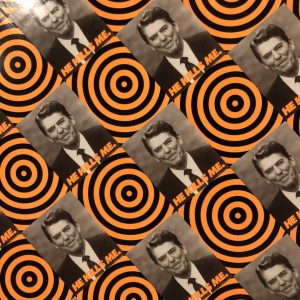 One of the key effects of the technological changes is that the art world exploded in the 1980s, becoming a disparate medley of new approaches and ideological contention. Artwork became a commodity and the artist, a brand. A commodity always depends for its status and its value on its relative scarcity; once the reproduction and distribution of that commodity become effectively free, then it necessarily loses that value and that status. This is great news for consumers of art, but for artists (producers), it means, quite simply, that they suddenly have nothing of value to sell. There is no doubt that artists need to and have to sell art commodities at a relative profit. However, there is a fundamental difference between them in terms of what the aim of generating those profits is. In the case of artists, the aim is generally to generate enough income for a decent standard of living which will enable them to keep making artworks.

But now we are living in an age of digital reproduction. This form of digital reproduction makes the advertising of original works by amateur artists to be on the same ground as professional artists because it becomes a level playing field. The influence of the art world as an institution is placed on the sidelines and in the area of art history while contemporary artists compete for hits, recognition, and sales. The sales of artworks online have increased dramatically since the 1990s and while there is no official census, one may conclude that the sale of art online might have already surpassed the sales of artwork in art galleries.

What does this mean for the contemporary art galleries? That depends entirely upon what direction the socially elite decide to go in, for that is predominantly the driving force behind art sales in art galleries. If the social elite maintains the status quo and continues to buy art through schmoozing at art shows, then contemporary art galleries will continue to maintain their own status quo. If the social elites decide to begin investing their money by purchasing artworks online from the vast plethora of artists available it could create a radical shift in the value of maintaining actual sale-oriented art galleries.

Walter Benjamin’s writings within “The Work of Art in the Age of Mechanical Reproduction” foretold this shift, but at the same time stressed the value of the ‘aura’ of the original piece. This ‘aura’ was the feeling of tradition, the feeling of the artist’s hand, and the uniqueness of the piece. He argued that it was this unique ‘aura’ that drove people to ownership of specific pieces of original art. I think that pieces do have auras that we attach to them, a sense of karma if you will, but I do not believe this is what drives us to possess these objects. Rather it is our greed and capitalist pleasure that we get from acquiring objects, especially rare objects, that drives people to spend enormous amounts in the effort to purchase rare art objects. For example, many people buy for aesthetics, but they do not brag about buying an aesthetically pleasing art piece from a no-name artist.