Of the many modern American paintings out there, almost all by painters who must have been aware of Paul Klee and his body of work, what was it about the relatively small number we saw at the museum that made the final cut for this particular exhibit?

Honestly, that is kind of a tough question. Unlike other “inspired by” exhibits I’ve seen– for instance, this exhibit at the Espace Dali in Paris, which demonstrated how modern street artists have been visibly influenced by Dali’s surrealist style and quirky imagery– these paintings didn’t all resemble Klee’s work that much. The exhibit description admits that the artists on display here “did not seek to emulate or copy Klee’s style, nor did they all necessarily cite Klee as a direct influence; each encountered and drew upon Klee’s art and ideology in various ways.”

But what ways? The most basic common thread I could determine between these works is that a lot of them provided ways for the artists to escape reality– after all, “reality” in recent times had consisted of war, persecution, and widespread destruction. This artistic urge seems to occur a lot in postwar eras– in high school, I remember studying the Dada Movement, in which 1920’s artists and playwrights had used humor and absurdism to overcome the utter dreariness of the World War I years.

This exhibit, with artwork by Klee and his followers which is largely divorced from realism, seems to have been the product of a similar line of thought. Most of these paintings weren’t realistic portrayals of urban or natural landscapes the way that Impressionist artwork, for instance, might be. Instead, these works seem to have emerged from colorful imaginary worlds filled with abstract images and various symbols.

Lots of symbols. That is another major area of overlap for these paintings. They relied quite heavily on the visual semiotics and symbolic language which the authors we’ve read have identified as a prominent feature of this era of artwork. All of those arrows and eyes, including in paintings such as Pierrot by WIlliam Baziotes and Labyrinth #1 by Adolph Gottlieb, are probably among the likeliest nods to Paul Klee throughout the artwork seen here.

It’s possible that Klee’s calligraphy paintings are one of his modernist interpretations of the traditional poem-painting. In China, there is a long tradition of reciprocity in the relationship between the arts of writings and paintings. These two visual arts developed hand in hand, sharing the same tools and techniques. Ancient Chinese artists have mastered three perfections to achieve the gathering of poets, calligraphers and painters to create an artwork. The resulting product would be a painting that would include the work of a calligrapher to write a poem. As Klee said, “Since the dawn of civilization, drawing and writing… were the same thing.”  In Klee’s paintings signs clustering, we can see how Klee actively create his idiosyncratic features of writing and the structural parallels between verbal and visual imagery that is common in Chinese traditional poem-painting. Klee recreate those letters that are verbal signs in a personal visual style to negotiate meaning with his viewers. We can see many liberate lines and automatic writing and tapping in klee’s paintings, reflecting klee’s philosophy and methods of visual expression: “The essence of calligraphy consists not in the neatness and evenness of the handwriting . . . but in the endeavor to express what one has to express as perfectly as possible and with the greatest economy of means. To bring out this calligraphic character in drawing or painting is a part of the artist’s craft. . . . The more capable our handwriting is of writing, the more sensitive becomes its signs.” 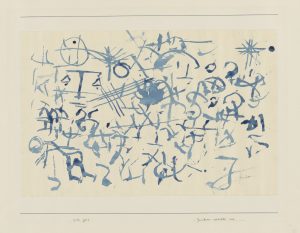 The exhibition contains Klee’s works and the other Americans artists’ paintings that are influenced by Klee’s style. Inspired by Klee’s work, these artists learn from Klee’s abstraction, the use of signs and expressive potential of symbolic forms. In the painting of “Sounds at Night”, the artist learn from Klee’s abstraction, created his own form and unique way of illusion.

It was impressive to see how different artists use multiple layers in their artworks. In the painting of “The Seer” by Adolph Gottlieb, the artist painted abstract symbols which created a unique artistic language that revealed several layers and meanings. Through lines, colors, structure, and the feeling that immersed from the painting, these reflections are representational code of layers with geometric forms. And we the audience could see through the painting’s time and space, which is fascinating.

Similarly, the work of labyrinth also included different layers in the painting. The square, the rectangle, and other layers that made the artwork vivid and have multiple layers’ making.

The impression of art is unlimited with free imagination and situated in the art space that connected and combined the given context and environment is connected.

Lastly, I feel like “modernist art” often carries a lot of social commentary with it; the name alone suggests a reflection on “modern times.” Maybe the work here wasn’t the most overtly political art of the era, but given its influences– “the art of indigenous cultures… [and] nature’s invisible forces,” among others– Klee and his American followers are seemingly taking a stand for several important areas of modern culture to be granted more attention. Since so much untraditional artwork was denounced as “degenerate” in Klee’s time, perhaps creating artwork that the Nazis would have cringed at can be read as a positive, “it’s OK to be yourself” message on the American artists’ behalf.

The terms “modernism” and “postmodernism” are broad and difficult to define, in my opinion, but I look forward to taking a crack at it in class, using the artwork we saw at the Phillips Collection as a starting point.