Transitioning from the realist to modernist movement, artists began moving from attempting to depict their external surroundings, and portraying real life exactly as it is–or “national life” (Edwards and Wood, 31)–to leaning toward the more abstract and turning inwards, depicting self-consciousness. In the early 20th century, art started becoming a method for reflection, as well as a means to illuminate the current circumstances surrounding social changes. Arnason and Mansfield write, “what is referred to as globalization is the most recent phase of uneven and combined development” (32). Due to rapid urbanization, the juxtaposition of the developed and under-developed and the uneven distribution prevalent in society became key elements that were incorporated into modernist artworks. “Both perspectives–Primitivism and Futurism–entailed a profound hostility to the world as it had actually developed, and both orientations were rooted in the conditions of an uneven and combined world system” (Edwards and Wood, 31). That is to say, modernism aimed to eliminate the notion of space and time, by creating a symbolic language that isn’t attached to real life events, such as those of World War II, but rather to a process. The artists searched for art forms and methods that were ultimately removed from the external world, and its harsh realities.

As artists departed from the idea of space and time, they sought to highlight the “transitory” elements of life and experienced changes in and within their art. The need to express such elements as transition, change, and time mirrored the social climate at the time. This shock of change sparked discussion and exchange of new methods of art that went beyond imitation, including but not limited to duality, clash of space and time, as well as the interplay between signifier and signified. In other words, artists sought for “the elimination of all obstacles between the painter and the idea, and between the idea and the observer” (Arnason and Mansfield, 394). This movement marked a shift from traditional academia, and represented a desire for freedom from politics, tradition, etc. The meaning of art was brought into question as new forms of art started to emerge, and some artists began abandoning structure for abstraction in order to express art as an experience invoking thought, emotion, and transcendence. As such, modernism became synonymous with rejecting the conservative values and traditions of realism, and embracing reprise, recapitulation, and revision by using geometric shapes and symbols. To modernist artists, such as Mondrian, Kandinsky, and Klee, “a painting continually grew and changed in time as in space” (Arnason and Mansfield, 282). The process of change became the central focus, primarily shown through the layers and layers of paint in each artwork, and even in the presentation and exhibition of the artworks of that movement.

Modernism at the Phillips: Dialogism in Action

The curating of the Phillips Collection includes explicit dialogism: at the entrance, the welcoming text states, “At the Phillips Collection, we invite you to connect with art, spaces, and each other. The artwork on view is constantly changing, and the conversations between them are, too. Please explore, build connections, and join the experiment.” In other words, from the moment one walks into this museum, viewers of the artworks get to engage in the ongoing and changing dialogue between and among artists. The exhibit on Paul Klee focuses further on drawing clear connections among the artists; in many cases the museum labels and descriptions make direct references to where other artists would have seen his work and techniques and quote the artists discussing Klee as an influence. The descriptions also establish the relationships and overlap between Klee and his successors in terms of technique and method, indicating that Klee played an influential and prominent role in the art world, and specifically in modernism. 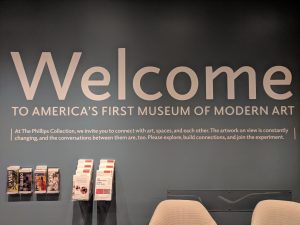 While the Phillips could have easily, as it has before, presented an exhibition consisting only of the works of one specific Modernist artist as a distinct unit, curators instead chose to show Klee’s works alongside–and often undifferentiated from–those of other artists; thus, the exhibition forces a recognition that no artist exists in a vacuum. It also doesn’t force uniformity on its artists. One particularly interesting inclusion in the collection was the Gene Davis piece Red Devil, which is drastically different from most of the other selected works. Excluding the piece would have made perhaps for a more visually cohesive show, but its inclusion reminds the viewer that, while Klee was a source of inspiration for Davis and the other artists, he was far from the only force contributing to their artistic development, and many ended up in places that are far from the ground they once shared with Klee.

Another notable inclusion in the exhibition is the recognition of the role of the Phillips Collection itself, an example of what Bourdieu calls “the performative magic of the power of instituting, the power to show forth and secure belief or, in a word, to impose recognition” (The Forms of Capital, 21). Reinforcing the role of the institution in the art world, the museum was mentioned multiple times as the place where later artists saw Klee’s work on display. Tucked away in the corner of one room was a glass case that was even more explicit in acknowledging the role of non-artists in the system. It included letters between Duncan Phillips and Karl Nierendorf, Klee’s dealer in the United States. While one function of this display is to reinforce the cultural capital and authority of Phillips and the Phillips Collection (the display highlights Nierendorf’s fervent praise of the museum), it also draws attention to the economic system that exists around even the most avant-garde art.

Photo taken at The Phillips Museum