As a teacher, painter and musician, Paul Klee can be considered an anti-categorical artist in practice and purpose. His paintings, inspired largely by music and children art, cannot be contextualized in one “school” but rather can be seen as osmotic. His paintings blend multiple different movements and ideas together to create a rather witty and childish masterpiece that has influenced generations of artists and people alike.

As a teacher at the Bauhaus, he was exposed to the various teachings and dogmas of the Bauhaus to further influence his work in terms of design. His family was rather musical as well, with his father as a music teacher and his mother trained as professional singer. Klee was raised in a musical family and was trained as a violin player. He saw analogies between music and visual art, where certain colors stand for expressions and musical rhythms. Such an idea links back to Kandinsky who saw colors as different forms of musical rhythms and tempos. The musical and the visual become a different measure to analyze Klee’s work, which become, if you will, a symphony of signs and symbols that combined seem as if a child is playing with artistic tools (playing in the musical and visual sense).

In Klee, we can see the convergence and reinterpretation of many artistic genres – from Cubists and printmaking to the German Renaissance and Romantics (Arnason & Mansfield, 2012), especially in his choice of medium and material. In Paul Klee and Ten Americans, After Paul Klee, a Klee piece described as “oil on canvas” sits next to a work of “colored paste on newspaper on burlap.” His vacillating choice of medium captures the zeitgeist of the early 20th century: uncertainty. Whether it be the radical new ways of thinking, the confrontation of old and new cultures, WWI and II, the introduction of technology and the fear that comes with it, Klee’s work regresses to a childlike state – innate to all humans – all while incorporating the complexities of modern life and the traditions of human life (music, signs, language). Klee almost perfectly represents the “continuum of reinterpretations;” the idea that we will never cease to combine elements of what we have seen, heard, read, etc (Irvine, 2018). However, even with the multitudes of artistic codes present in Klee’s work, one cannot deny that what he was doing was different. It was so different in fact that it influenced a generation of artists in an entirely different country, as we saw in Ten Americans. Klee tapped into something that had not been tapped into before. He regenerated codes of the past, inaugurated them into the present, and solidified his influence into the future.

One of Klee’s ways to explore human life is through nature. Rather than representing nature, Klee mediates nature through abstract art. As the curator notes in “The Nature of Creation: Making the Invisible Visible,” Klee turned away “from the social realist art of the 1930s that remained firmly tied to depicting the harsh realities of the external world,” and developed “a profound desire to use art to express the vitality and internal rhythms of the natural world.” Just like artists of Romanticism, Klee also believed that human beings could reach their interiority and spirits through their connection with nature. Using abstract art, Klee tried to capture the ungraspable feelings that are evoked by the sight of nature. Arnason notes that Klee attempts “to arrive at a reality beyond the visible world” (128). It is through the media of symbols, bold colors and exaggerated patterns that Klee translates the invisible and the unrepresentable human feelings on the canvas.

Evoking the natural world for their artistic expression is not exclusive to Klee. It is also shared by later artists, who interacts with Klee across time and space. The Exhibition curation lists Klee, Baziotes, and Stamos among others as examples, and describes their style as “a pictorial language of abstract motifs” that “evoke the natural world in constant state of growth and evolution.” The paintings by Klee and Stamos (below), through different in various aspects, share commonalities as well. For example, both of them use abstract patterns to create meaning (or non-meaning), and both of them creates different layers of colors for expressing their ideas. This illustrates how artists are involved in dialogues across time and space, and how Klee’s innovations in abstract art influences artists in later times. Those paintings inherited the features of symbolism, including “expressing [the artists’ individual spirits],” creating “a fantasy world” and evoking “free imagination” (Kleinder 707), but also anticipate and echoes with surrealism and cubism in later times. The world of art is always a world of dialogism. 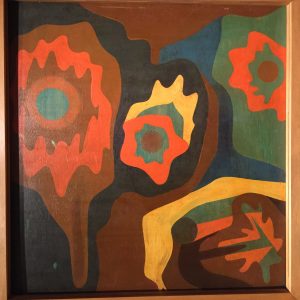 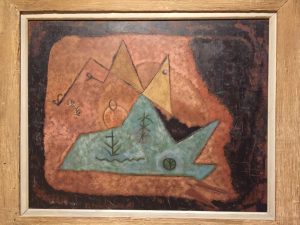 Photos are taken at the Philips Collections.