Reflecting on my own reading experience, the word “dialogical” and “dialogism” appear usually in literary critique or philosophy, but very little has been said about the meaning of these terms in artworks and visual media. From this week’s reading, I have a chance to gain a broader understanding and newer insights about these terms, especially when applied to arts. As Bakhtin mentions in Problems of Dostoevsky’s Poetics, being-in-dialogue is a process that “a person participates wholly and throughout his whole life: with his eyes, lips, hands, soul, spirit, with his whole body and deeds. He invests his entire self in discourse, and this discourse enters into the dialogic fabric of human life, into the world symposium”. What I perceive is that “dialogical” or “dialogism” can be viewed as tropes similar to counterparts in literary theory, that is, metaphors to support the analysis of cultural products that are materially self-contained. In this way, we put ourselves in real dialogues and in certain forms of communication between two living entities when we are examining artworks. 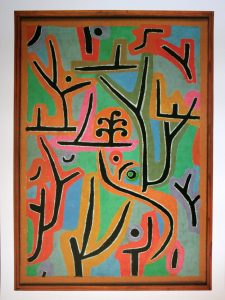 Me, as a viewer, participates with the painter Paul Klee when I see Paul Klee’s painting Park near Lu., 1938 the first time. I couldn’t help putting myself at the nexus of minds and imaginations. The black symbols which represent trees and their branches, as well as roads in Lucerne. There is a strong contrast between the brunch and surrounding areas. My interpretation of this painting is that it represents hopefulness and anxieties at the same time. It is said that “Park Bei Lu” was created when Paul Klee was inspired by an impression he had of nature within a park located near Lucerne. His wife Lily needed to travel to Lucerne for health reasons to visit a sanitorium. Warm colors like orange, red and yellow get me in an energetic and warm feeling. The surrounding areas around branch do look like the blossom. But I still have a feeling of anxiety at the same time. So this is my involvement with Klee. I think that the dialogues between me and Paul Klee are more dialogic than monologic. Bakhtin’s notion of dialogism, the belief that language and thought are ultimately social in addition to being unitary. Bakhtin wrote of dialogism “After all, our thought itself — philosophical, scientific, artistic — is born and shaped in the process of interaction and struggle with others’ thought‘. 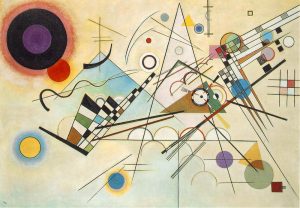 The dialogues also take place between Klee and other artists such as Kandinsky. Klee’s “inventiveness” includes pictorial transpositions drawn from music — he married a pianist and played violin every morning — and from a theater. The movement and rhythm in their paintings do reflect the influence of music on the visual arts. By approaching to music and painting it in their work, these artists have discovered unconventional techniques in their art-making approach. Also like Kandinsky, Klee took up a spiritual pursuit in color.