Paul Klee’s painting was never based on immediately observed nature, but his abstract paintings have pulsating energy and evolved through a natural process of dynamic growth and transformation (Arnason & Mansfield, p.282).

I choose the two paintings by Paul Klee that will be seen in next week’s field trip. One is Young Moe (1938), and the other one is Kettledrummer (1940). Both of them reflect the representative features of Klee’s painting, his work not simply emphasis on the geometric elements such as the point, the line, but he created energy and vivid emotions to the color, to the line.

To understand the meaning of Klee’s works, the concept of visual semiotic is about the inquiry into sign and symbol systems. “Meanings, and all kinds of responses to signs and symbols, are socially communicable events, not fixed things.” So by looking at this two paintings, i have come up with following questions. 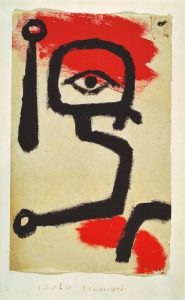 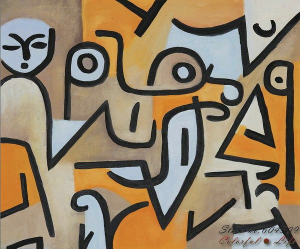 According to the reading, Klee discovered his iconography of painting through teaching, where the arrows are the indications of lines of force for his students, the elements that show emotions and feelings. As visual semiotic suggests that when we look at a painting, it is necessary to take consideration the big environment as situated, not the painting itself. While Leonardo Da  Vinci and Monet or Andy Warhol are known for their symbolic artist’s style that got recognition and uniqueness, I do think that Klee has his own individual prototype. His use of contrasting and bright colors, the arrows, the lines, and his sometimes childlike perspective and his personal moods and expressions are vividly reflected through his works of art.