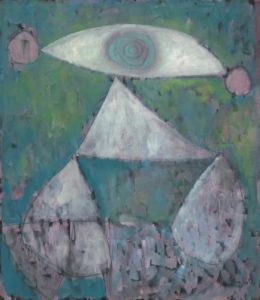 Looking through the works featured on the website for Ten Americans, After Paul Klee, my attention caught on a work by William Baziotes, Pierrot (1947). As I started considering the many facets of the painting, I felt a draw to start looking into the background and context surrounding it more–but for the sake of this post, I’ll restrain myself to the questions I came up with to guide future research and interpretation.

Does Pierrot fall easily into one genre of painting, or does it draw on multiple genres? How do the choppy brushstrokes and use of subdued colors play with the visual codes of that genre (or genres)? What about the use of both geometric shapes and seemingly identifiable images (the eye at the top)? Are the shapes meant to be iconographic, symbolic, or both, and in either case, what are they representing?

What was happening in the art world in 1947? What other artists were doing similar work, and how well exposed to them was Baziotes? What artists might he have (consciously or subconsciously) drawn on as inspiration? How did his fellow artists respond to Pierrot?

Where does Pierrot fall in the work Baziotes? Is it connected, in topic or style, to other works of his, and if so how? How does it fit into the themes of his work more generally? What is his general approach to art and its creation?

The work’s title refers to a classic French character generally portrayed as a sad, naïve clown. (This is in fact what drew me to the painting initially.) What connection does Pierrot (the character) have to modern art movements? What other artworks (visual, stage, literature, and others) featured Pierrot in the early-to-mid 1900s? How is this work a (re)interpretation of the character, and how does it echo, resist, or expand upon other interpretations?

What was happening outside the art world in 1947? Is this piece commenting on the post-WWII world (at least, any more than modernist art as a movement does)? If so, what is it saying?

Most of these questions are expansions on a more general one: What message or meaning is Baziotes trying to present in this piece, and how does the format of his art convey and contribute to that message? I have some suspicions, but as I noted, I’ll hold off on those… for now.