In O’Doherty’s “Inside the White Cube” and Alexander’s “Museums in Motion”, both authors speculate on the concepts, ideas and values surrounding galleries and museums in general. Alexander states that a museum is a “shared cultural experience”, a “depository of curiosities” while O’Doherty likens galleries to sacred spaces, “constructed along laws as rigorous as those for building a medieval church, where the outside world must not come in” (Alexander, p. 1, 3; O’Doherty, p. 7). Both authors highlight how the function of museums is nothing new to today’s world, where such spaces that housed objects of importance dates back to “greek temples with hoards of votive offerings” to “Egyptian tomb chambers” and even back to Paleolithic times where paintings graced the walls of Lascaux caves (Alexander, p. 2; O’Doherty, p. 8). Indeed the function of museums and galleries is to collection, conserve and research various items that are deemed culturally important and aesthetically pleasing. Yet such a description neglects the invisible function of museums to “secure financial stability, work that may involve local philanthropies, politicians or leaders or other cultural institutions” (Alexander, p. 10).

Alexander further extrapolates on the value of museums, citing the famous anthropologist Franz Boas to accentuate how museums circumscribe art and beauty as aesthetic entertainment to all those who are privy to enter such spaces (p. 11). Boas was working at the time when imperialists were collecting and cataloguing various “primitive” forms of art such as totems, ceremonial masks, pottery among other things. Yet such discoveries were not housed in a museum compared to famous masterpieces of the Renaissance. So how would Alexander define a museum when these art forms were “rejected” as art in the western sense? Were museums still considered depositories of curiosities? Shared cultural experiences? How does one value a system that looks at art through a western perspective?

O’Dohnerty looks at museums as a kind of tabula-rasa, where the “communal mind of our culture went through a significant shift that….leaves the slate wiped clean” (p.11). Reducing a gallery to a white cube looks to semiotics to make meaning of such a reduction. In my opinion, a white cube is anything you want it to be, creating an interface for a viewer or visitor to explore their ideas of art, beauty and aesthetics. As O’Doherty explains, “the object frequently becomes the medium through which these ideas are manifested and proffered for discussion” (p. 14). The concept of space and art can be seen in Morse’s Exhibition Gallery at the Louvre” where masterpieces are hung like modern-day wallpaper, creating a dynamic relationship between painting and the wall. How to define such a relationship with a “white cube” of space? Such an idea likens to “0.10” Zero Ten in St. Petersburg in 1915, where Malevich’s Black square hangs in the same place as would a traditional icon from the Orthodox Russian church would hang. How to describe the religiosity of space that Alexander and O’Doherty expounds upon when a mundane symbol such as the black square eclipses an icon? These questions and ideas changes the inherent function of museum and the value that we place in art and the “artworld” system as described by Professor Irvine. 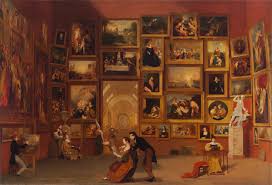 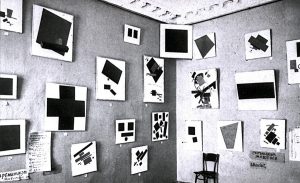