One feature that the Vermeer Exhibition curation stuck me as remarkable is the emphasis it puts on “relations.” It does not introduce Vermeer as an isolated individual painter, but puts him in a set of relations with other artists of the same time period; it also contextualizes Vermeer’s paintings with other genre paintings in the later 17th century. This effect is reached through the online introduction and the onsite exhibition arrangement.

On the exhibition website, there is a link to “Connect Vermeer,” which is a digitalized diagram that shows the relationship between artists that are involved in this exhibition. As the explanation on the website notes, “the distance between the central artist and a satellite artist is determined by the level to which the central artist influenced the latter.” Remarkably, it puts an artist into a set of relations through demonstrating each of his unilateral relationship with the others. The diagram thus creates a network of relationships that allows the viewer to understand a single artist’s status within his community, and to make comparisons within the same frame of reference. Take the Vermeer-centered diagram as an example (see below), we not only know who have been influenced by Vermeer, but can also see that, for instance, Vermeer had a greater influence on Jan Steen than on Gerard Dou.

Likewise, the actual exhibition also forces us to acknowledge how the artworks with similar themes are related to each other. In the first exhibition hall, which has a theme of “musicians,” different artists’ paintings that deal with the same theme are put together. For example, Vermeer’s Young Woman Seated at a Virginal and Dou’s Woman at the Clavichord are deliberately put together (see below). The resemblance of the two pictures are foregrounded immediately: both have a piano and a cello in the painting, and both of the protagonists sit in the same direction with their heads facing towards the viewer. The similarity between the two works might make one wonder the relationship between the two artists. At this point, if one goes back to the interactive diagram, one will find out that when Vermeer is in the center, Dou is on the outermost layer to the center, and when Dou is in the center, Vermeer is also on the outermost layer to the center. This obvious balance between their relationship may shed light on our understanding of the above discussed two paintings, and may suggest that Vermeer and Dou compete with each other as they hone their painting skills. 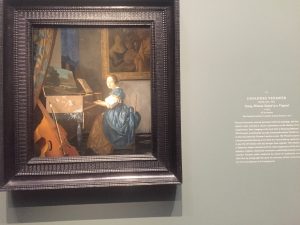 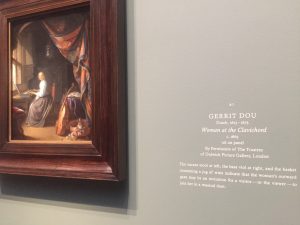 As it is helpful to contextualize the artists and their works with other artists of the same group and their works, this arranging method might also influence our sense of unity of a single artist’s works. For example, Vermeer’s paintings are scattered in different exhibition halls and are separated from each other. How do we deal with the situation that the current arrangement makes it harder to get a better sense of Vermeer’s style as we cannot view his works altogether in one exhibition hall?

taken at the National Gallery of Art