Our Impressions of the National Gallery & Samuel Morse

Upon entering the National Gallery of Art, we were immediately awed by its monumentality. The sheer grandeur of the fountain in the rotunda suggested that the art in the gallery spaces would be no less impressive. Entering the room that houses Samuel Morse’s House of Representatives, our eyes were drawn to the large scale of the painting; the large size of the piece being an entitydifficult to gauge from online images. We believe that the physicality of the space is vital when viewing art to complete the viewer’s experience of visiting a gallery. In this case, Morse’s painting hangs on a wall all by itself, signifying its importance within the gallery. Across from Morse’s painting hangs a portrait of George and Martha Washington, two iconic figures in American history. Portraits by artists John Singleton Copley and Benjamin West hang on the adjacent wall. The fact that Morse’s lesser-known painting shares gallery space with famous artists and subjects suggests to us that Morse’s painting should be treated with equal seriousness and viewing time as the work of his more famous peers.

As we moved from room to room we felt as if we were exploring the narratives of different stories; each room seemed to follow its own theme (portraits, landscapes, women in art, etc.) The layout of the paintings, the room’s architectural design, and even the sparse gallery coloring and furnishings are carefully designed to give the artworks context beyond the subject matter. Each painting is a self-contained actor, yet the paintings sharing gallery space are a dependent network that connect to both the theme of each room and to the mission of the museum as a whole: to showcase the national identity of the country ( Latour, 5).

Although we can appreciate the National Gallery of Art in itself as well as the inspiring artworks it houses, the readings from this week detailing the history and many functions of a museum serve to deepen our appreciation of Morse’s painting and its museum home. Perhaps the most important parallel we drew between Morse’s House of Representatives and the readings was a quote from the McClellan reading. McClellan ventured to suggest that one functi 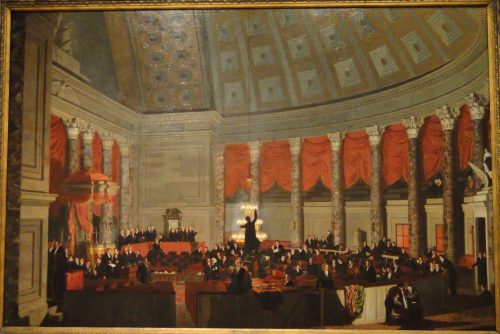 on of museums was to serve as “oases of beauty and calm in a hectic and rapidly changing world” (pg. 10). Coincidently, Morse designed his painting to reflect a fictional scene from a realistic gathering: a House of Representatives meeting. “At a time when the House was often raucous and factional….Morse presented instead a tranquil and relatively uneventful scene” (NGA website).

In addition, Morse’s subject matter mirrors McClellan’s mission of museums as a respite from society. The subject matter depicts a man in the center who is changing the lights in the chandelier while other members of the meeting talk with each other around the edges of the canvas, waiting for their meeting to resume. Whereas the museum is a respite from society, Morse depicts a respite from the meeting. Perhaps Morse was utilizing his medium of oil on canvas to offer viewers his attempt at an ‘oasis.’ In this instance, both McClellan and Morse suggest that art/museums offer some degree of respite from reality.

Another way in which this week’s readings broadened our appreciation for the National Gallery of Art was the way in which the museum acted as the interface for the artwork it displays. For instance, when we initially entered the museum, the awesome architecture and grandeur of the rotunda suggested an atmosphere is sublime artistic ability. In this way, the architecture and rotunda of the National Gallery foreshadowed the artwork we were about to view. This feeling epitomizes the Gallery’s mission statement, which states the goal of the museum as presenting art “at the highest possible museum and scholarly standards.” (NGA website). In our case, the museum greeted us with the highest architectural standards of grandeur. 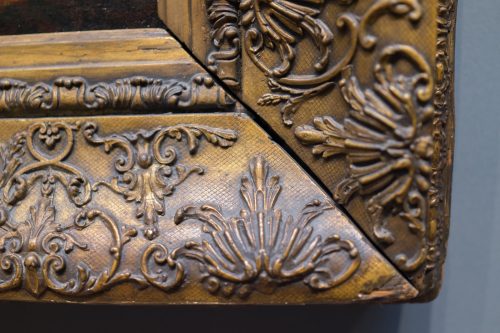 In addition, the neoclassical style of the gallery space paralleled the seriousness of the painted subject matter which hangs within the gallery rooms. This is exemplified in the pediment arches in the 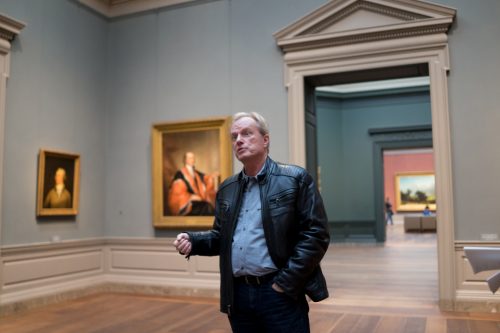 gallery and the heavy, gold gilded frame encasing Morse’s House of Representatives. Both of these neoclassical attributes act as interfaces, offering the viewer a framework for which to enjoy the art.

Similarly, the physical museum acts as an interface to the art itself in the way in which each exhibit was curated and displayed. For instance, the National Gallery offers each piece of art equal viewing opportunity in terms of lighting and spatial layout. Unlike Morse’s Gallery of the Louvre, the National Gallery hangs all its paintings at optimal viewing level (average eye level) and with equal overhead lighting. In his Gallery of the Louvre painting, Morse depicts several masterpieces in a lightless room cluttering the walls, likening them to nothing more than wallpaper (O’Doherty, 16). Author Brian O’Doherty refers to these high and low locations as “unprivileged areas” (16), which juxtaposes the fame of some of the paintings hanging in these areas (pieces by DaVinci, Van Dyck, Rubens, etc.). If these paintings were famous enough for Morse to study and recreate in his own painting, why didn’t he give them more space in which to be appreciated? There a 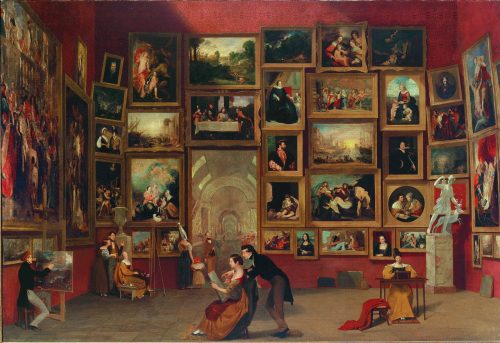 lso appear to be several painted canvases sitting on the floor of Morse’s gallery piece, garnering even less viewer attention.

Finally, we understand Morse’s House of Representatives to be an interface in and of itself. The genre of history painting offers viewers a glimpse into the rich history of America. Morse’s painting, despite its inaccurate tranquil atmosphere, is indicative of American history similar to the way in which the American artworks in the National Gallery act as multiple interfaces to America’s past.

O’Doherty, Brian. Inside the White Cube: The Ideology of the Gallery Space. Berkeley, CA: Univ. of California Press, 1986. Selections: Chapter 1.