In the following pages I will go over the dialogic context associated with Appropriation Art, specifically looking at the iconic image of Leonardo da Vinci’s Mona Lisa. Duchamp’s L.H.O.O.Q., Warhol’s Thirty Is Better Than One, and John’s Seasons are all famous works from different movements that depict the image of the Mona Lisa. How do these pieces’ associate with one another? Do these separate pieces of work drain the original dignity from the Mona Lisa? Or do they continue to re-distinguish the piece as a famous work of art? 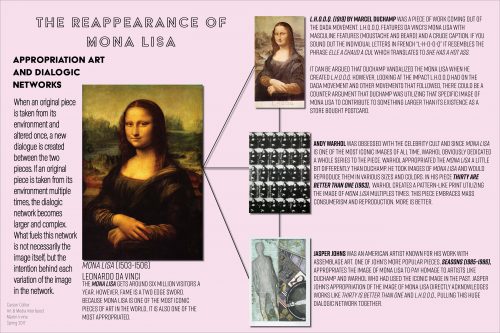 Appropriation Art in a Dialogic Network

Roland Barthes refer to the three ingredients of an image: lines, forms, and colors (pp. 157-158). This sounds simple enough, however, images have the ability to provoke different meanings. Each image created by an artist, whether it be the Mona Lisa or Starry Night (1889), can be thought of as an extension of the artist’s mind. To fully appreciate an artwork, each viewer should try to consider the environment in which the work was created (Clark and Chalmers).

Hanging at an underwhelming 2’6”x 1’9” in her own corner of The Louvre, is Da Vinci’s Mona Lisa. One of, if not the most, iconic paintings in history. The Mona Lisa gets around six million visitors
a year. However, fame is a two edge sword. Because Mona Lisa is one of the most iconic pieces of art in the world, it is also one of the most appropriated. The Mona Lisa has been appropriated in various forms, from popular culture, like the American television show the Simpsons with “Mona Lisa Simpson”, to random hobbyist like Svetlana Petrova who inserts her cat, Zarathustra, into famous pieces of artwork. 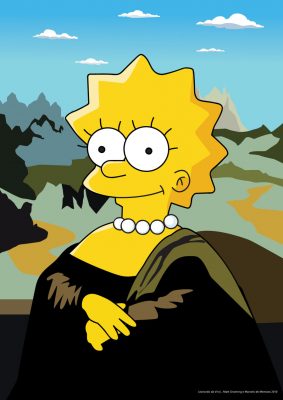 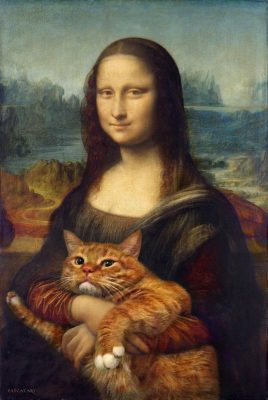 Appropriation of Mona Lisa was not limited to popular culture and hobbyist. Famous artists like Marcel Duchamp, Any Warhol, and Jasper Johns, have successfully appropriated the Mona Lisa in their work.

“Dada is seen as iconoclastic and confrontational” -Hopkins

After World War One, most people’s view of the world was turned upside down. In order to cope with this change, different artist came together and created the Dada movement. The Dada movement was short but strong lived and it embraced everything anti-art; lasting from the mid- 1910s to the early 1920s. For the artists that participated in Dada, the violence of the war confirmed a lack of social structure in modern society (“MoMA Learning”) and the Dada movement was an attack against this society. Dada challenged the mainstream. For most Dada artist, the visual aesthetic of their work was not important. However, the ideas that the work promoted were the intended center of discussion. French artist Marcel Duchamp was one of the participatory artists of the Dada movement and also introduced the idea of ‘readymade’. Readymade work was associated with utilizing things that had already been manufactured and not typically considered ‘art’. Fountain (1917), is one of Duchamp’s earliest readymade pieces. Fountain was created by Duchamp to mock the mainstream ideals of society. 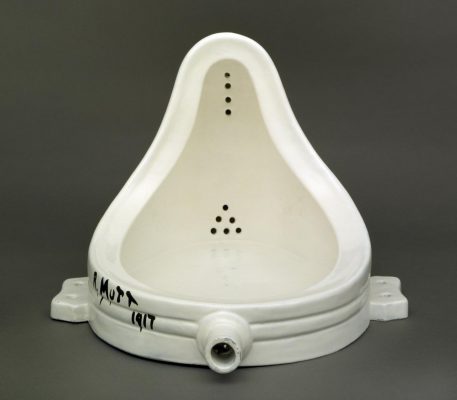 L.H.O.O.Q. (1919) was another avant-garde work from Duchamp coming out of the Dada movement. L.H.O.O.Q. features Da Vinci’s Mona Lisa with masculine features (moustache and beard) and a crude caption. If you sound out the individual letters in French “L-H-O-O-Q” it resembles the phrase “Elle a chaud a cul” which translates to “she has a hot ass” (Ayers). This work became an inside joke in the art world associated with the Dada movement. Shortly before da Vinci’s death he claimed to have never finished any of his work. So Marcel Duchamp decided to finish one of da Vinci’s works for him. All joking aside- this piece along with the Dada movement directly challenged traditional art and helped pave the way for the upcoming surrealist movement. 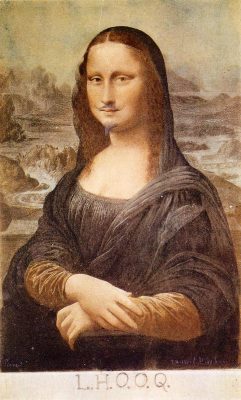 It can be argued that Duchamp vandalized the Mona Lisa when he created L.H.O.O.Q. However, looking at the impact L.H.O.O.Q had on the Dada movement and other movements that followed, there could be a counter argument that Duchamp was utilizing that specific image of Mona Lisa to contribute to something larger than its existence as a store bought postcard.

Another figure that was just as popular as the Mona Lisa, and had a background just as elusive as her smile, was Pop artist Andy Warhol. Warhol was known for his obscure screen prints of popular icons. The icons Warhol portrayed were anything popular and commercial, from famous people to cans of soup. 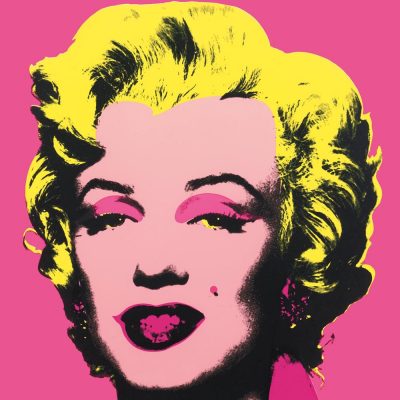 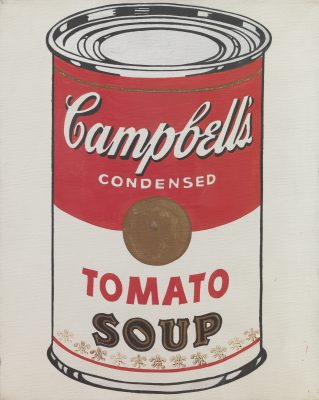 Warhol was obsessed with the celebrity cult and since Mona Lisa is one of the most iconic images of all time, Warhol obviously dedicated a whole series to the piece. Warhol appropriated the Mona Lisa a little bit differently than Duchamp. He took images of Mona Lisa and would reproduce them in various sizes and colors. In his piece Thirty Are Better Than One, Warhol creates a pattern-like print utilizing the image of Mona Lisa multiples times (Honnef, pp. 1-70). 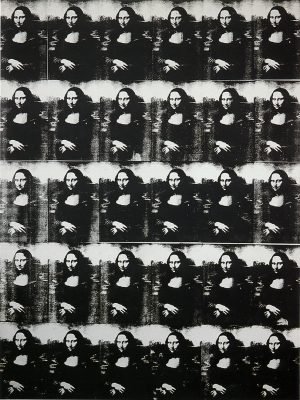 Thirty Is Better Than One (1963) Andy Warhol

Like most of Warhol’s work, this piece embraces mass consumerism and reproduction. More is Better. The late 1950s-1960s were the peak of mass consumerism in America. Unlike Duchamp who challenged the environment around him, Warhol embraced his. Warhol took what was popular out of its original medium and made it his own.  Mona Lisa and other popular figures continued to appear in many more works throughout Warhol’s career. 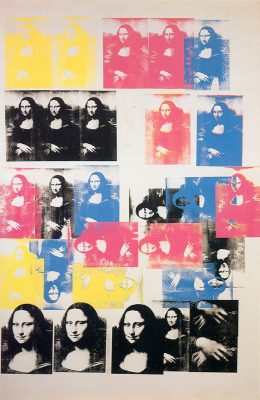 John’s was an American Artist known for his work with Assemblage Art. “Assemblage is a form of three-dimensional collage in which found objects- everything from old iron chains to movie posters and Cracker Jack prizes- are combined to make sculpture” (Bischoff). 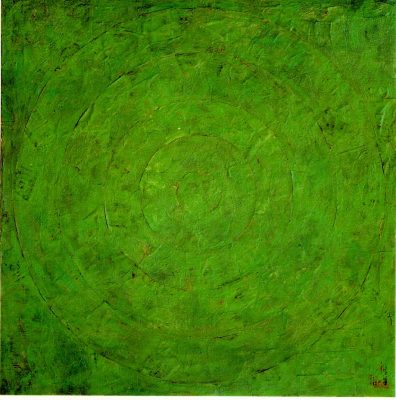 For example, Green Target (1958), one of John’s earlier pieces is made out of “encaustic on newspaper and cloth over canvas” (Jasper Johns, Green Target), not a typical medium. Jasper John’s, along with Robert Rauschenberg, were some of the key artists in the mid 20th century to move away from abstract expressionism. Johns liked to riff on the purposeful mess that was abstract expressionism with his Assemblage art. However, compared to Duchamp and Warhol, John’s rebellion was deemed as a little bit more reserved. One of John’s more popular pieces, Seasons (1985-1986), appropriates the image of Mona Lisa to pay homage to artists like Duchamp and Warhol who had used the iconic image in the past (“JOHNS, Jasper”). 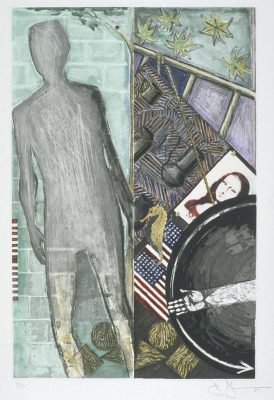 The Seasons (Summer) 1987 Jasper Johns born 1930 Presented by the American Fund for the Tate Gallery, courtesy of Judy and Kenneth Dayton 2004 http://www.tate.org.uk/art/work/P12998

Jasper John’s appropriation of the image of Mona Lisa directly acknowledges works like Thirty Is Better Than One and L.H.O.O.Q., pulling this huge dialogic network together.

Appropriation Art comes in many different shapes, sizes, and mediums. We see this when looking at how one image like the Mona Lisa can be taken from an oil painting, appropriated as a television cartoon, a postcard, a silk screen print, or a piece of Assemblage Art, and so on. I believe this repeated appropriation of the image of the Mona Lisa encourages a dialogic network. Mona Lisa’s continued existence in this appropriation pieces re- distinguishes the iconic image itself.

Irvine, “Remix and the Dialogic Engine of Culture: A Model for Generative Combinatoriality.”