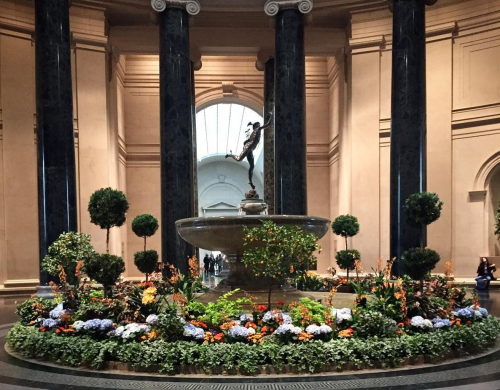 First, we ran into the Voyage of life series(1842) by Thomas Cole. His work traces the journey of an archetypal hero along the “River of Life.” The NGA says that Cole’s paintings depict an “intrepid voyager” who “may be read as a personification of America, itself at an adolescent stage of development.” In the early 1800s, sons of the newborn country were ambitious to establish their own traditions and genres. Samuel Morse was one of the artists who practiced to advance arts in America. When we enter the room where there is The House of Representatives (1822-23), we felt like we should be prepared to the see some serious works.

It’s clear that Morse was dedicated to his craft of being an American historical painter. As Alexander and Alexander write in Museums in Motion, “exhibition, education, or interpretation-the conveyance of culture and a commitment to community or social welfare have grown to be important aims for the museum in the last century.” Thinking of Morse’s other masterwork Gallery of the Louvre(1833), we can feel his ambitions to create works with historical significances of American national identity and transport European art traditions to the US. There are many portraits of important historical figures hanging in the room. They are all witnesses of American history. We sensed this “reality” of museum that cannot be sensed when you just scan your computer through your cold screen at home. The canvas included careful renderings of architecture and people.

Stepping outside of the artwork, its frame, the room it’s inside, and the museum itself allows the individual to better understand the role of the artwork within a larger context. One way to understand these dimensions of experience is seeing them as ‘interfaces,’ or windows to meaning. Alexander and Alexander in Museums in Motion reflect upon the original function of museums as transitioning over time based on both intentional and unintentional political, aesthetic, and educational purposes. In analyzing the artwork, it’s helpful to understand the context within which artifacts were chosen to be placed in the Museum. For instance, Alexander and Alexander explained how in Rome ‘museums’ included artifacts that the state had acquired after conquering another region. This context of acquisition is important to understand, because the artifact is not just a stand alone piece; it’s actually very political. At the time, the variety of pieces showed the grandeur of the Roman empire and its military strength.  By stepping outside of the work and looking toward the purpose of the rooms within the museum, the visitor can gain a clear idea of why certain artifacts were important to the curators and the content of the artifact might have had importance in society.

According to McClellan in his book on art museums, the mission of Washington’s National Gallery of Art “is to serve the United States of America…by preserving, collecting, exhibiting, and fostering the understanding of works of art.” The National Gallery’s historic American collection was transformative, allowing for an enriched and enhanced presentation of the history of American painting in the permanent collection galleries.  In Morse’s time, the American Arts were not treated very seriously, but thanks to the efforts of him and his peers, American collectors started to collect and support their own arts. And seeing the room within which Samuel B. Morse’s painting House of Representatives was placed, one can tell that it is important. Looking around the room, the visitor can see that many of the pieces were part of the Corcoran collection and the Andrew W. Mellon collection. Mellon was instrumental in acquiring historical artifacts throughout American history, and many of these pieces were obviously important to have come under his radar. And, Morse’s painting, which was part of the Corcoran collection, must be very important to the museum, since it is being placed within this group of works.

The way the pieces are arranged within the room itself shows that Morse is considered to be part of an important collection of historical paintings on American politics and culture–which is exactly what Morse had been working for his entire life. He’s placed within a room with his teacher, Benjamin West, as well as other artists that were known for depicting important historical figures and events. Understanding this concept is important to recognizing the context within the artwork itself should be interpreted. Just blindly looking toward a painting without the background of the interface museum may result in the visitor losing out on some important details. At first glance, it just seems like a painting of congressional figures, but it’s truly much more symbolic and complex. Finally, seeing the artwork itself as an interface for what was happening during society at the time is important as well. The painting is more than just a depiction of an event; it is truly a “window” into what might have been happening during a particular time period, and it’s the artist’s attempt to steer the viewer toward a particular viewpoint. This painting represents a functioning congressional house, which was not the case at the time. But, it was the ideal that Morse wanted.

Alexander, Edward P. Museums in Motion: An Introduction to the History and Functions of Museums. Nashville: American Association for State and Local History, 1979. Print.

McClellan, Andrew. The Art Museum from BoulleÌe to Bilbao. Berkeley, CA: U of California, 2008. Print.