My first encounter with Impressionism was not in a museum looking at a painting, but a book about Joseph Conrad’s Modernist style of prose in Heart of Darkness. It compared the extremely controversial image used in Marlowe’s initial phase of his foot journey through the Congo of groups of black people as “bundles of acute angles” (because of the way they sat on the ground) to Claude Monet’s Impressionist work Impression, Sunrise. I didn’t care for the analogy particularly, but before that reading, I didn’t know anything about Impressionist painting. Fast forward a few months, to a lovely date I went on to the Philadelphia Museum of Art, in a room filled with works of French Impressionism (I’m talking Paul Cezanne, Claude Monet, Pierre-Auguste Renoir, like… ~*~Impressionism~*~), I encounter Renoir’s The Grands Boulevards, and I must’ve stared at the thing for ten minutes. My date started to realize I was a huge dork, made the mistake of finding it charming, and continued to date me for three years. This confluent moment in my life – a date that started a significant relationship in my life, the merging of schema and lived experience with Impressionism, and my own interest and fascination with this Renoir work was my first deep dive into the tradition of art history. This is what I’ll be exploring in this post – the confluence of three unrelated experiences (the Heart of Darkness essay, the date, and the Renoir painting) at a critical juncture in time as an interface to a grander tradition of artistic representation and museums. 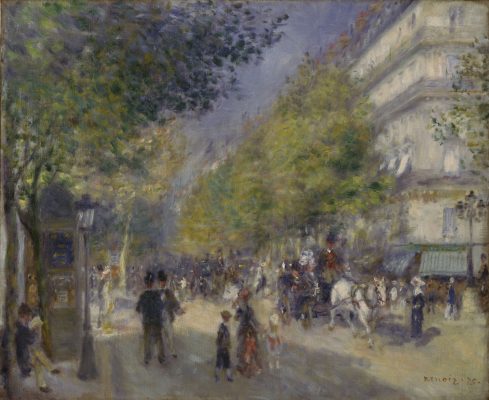 Central to my experience was the notion of dialogism – acknowledging this painting as an artistic representation that was produced at a specific period in time, as a communicative medium. Being preserved in this portrait is not just an artistic representation of some street presumably somewhere in Paris (just using the clues of the plaque and the painting), but the artistic techniques that build an Impressionist work. Meaning the subject, and how the subject is constructed are both necessarily Peircean objects on which the many layers of signs in my experience of the painting are built. The importance of the Impressionist mode of representation was further reinforced by the very room I was standing in – I was surrounded by paintings done by famous French names that all the intellectuals I respected had been throwing around my whole life. But honing in on the subject itself, I was captivated by the representation of the city street, as my date and I had just been walking around really pretty parts of Philadelphia on what I remember being a really nice day. There was even a horse driven cart (I swear, I’m not kidding; this is still such a thing in Philly) that people could take a ride in. The number of bodies, the bustle of the city street – these are all things that I could personally relate to from experience I had within minutes of seeing the painting. So in this way, not only the painting in its position in the museum was part of the interpretative framework, but the museum’s position in the city of Philadelphia and my walk through it minutes before encountering the painting colored my interpretation as well.

When I encountered the painting, I was able to place it as a work of Impressionism because of the museum’s successful organization of the works along with the very little background knowledge I had from the essay. My impression of it was further colored by intellectual pursuits at the time, reading works like The Theater and its Double by Antonin Artaud, The Order of Things by Michel Foucault, and Book X of Plato’s Republic. What is being represented in art? Not only the subject of the art, but the conventions of the medium itself are being represented. This idea, and stepping out of the limited interpretive framework of trying to “get” or “understand” a work of art, led me to a type of awakening. I finally “got” “it.” This was the whole point! Artists reinforce their medium of art by creating works, and these artistic representations help us put together the pieces of understanding any number of cultural phenomena. New Historicism, Posthumanism, and even CCT are examples in which art plays a central role in understanding human phenomena. Furthermore, museums do the footwork of servicing the public by being hubs of cultural works that network to hubs of cultural knowledge, that network to our own lived experiences. And I was at the center of it! It all worked in that moment. My own personal Singularity.