John Frederick Peto’s Take Your Choice (1885), currently found in the National Gallery of Art, strikes me as a treasure trove of semiotic description, an ultra-meta painting that contains stacks upon stacks of meaning. Of course, any painting I choose to describe is a “treasure trove”, Take Your Choice is not unique in this way. But there is something about this piece that I find truly interesting. Maybe it’s the subject matter, the colors, or the way it’s framed, but for some reason I want to talk about this work of art. I first saw this piece in November 2016, on a visit to the NGA. We briefly passed by it during our class session at the museum. Below, I will attempt to describe and interpret this work based on the terms and concepts that were in some of our readings. If my attempt is too terrible to read, just look back up at this lovely photograph of the painting and forget you ever read it… 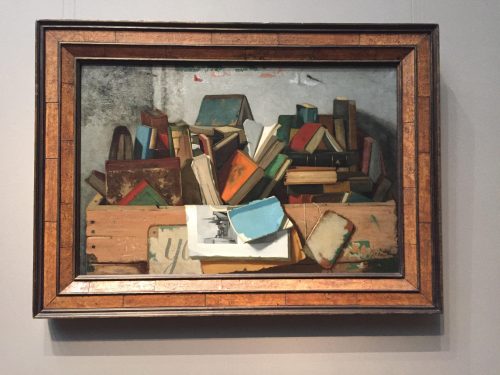 The Chandler article states, “We seem as a species to be driven by a desire to make meanings: above all, we are surely homo significans – meaning-makers. (Chandler 13)”[1] This quote seems to be the basis of semiotics. No other creature (that we know of) are driven to make such meaning, so only us humans need to study semiotics at the moment. When looking at the Peto painting, we begin making meaning immediately.

The name John Fredrick Peto, is a great place to start. What meaning is made here? I’d say that most people who read this name think, “Oh, who’s that?” Peto, unlike Van Gogh, is not a household name. Upon further Googling, I discovered that he was a forgotten artist until his paintings were rediscovered. So his name does not give this piece any credence. Seeing his name would not make anyone pause and gaze in awe at whatever is on the canvas. Unless you are a fan of l’oeil art, Peto’s name would not evoke feelings of mastery or even recognition.

Moving on from the name, which is a Signifier that the represents the Signified Concept: that this is the creator of this particular piece of art, to the title. Notice I am describing all of the words on the painting’s placard before describing the painting itself. This is because I want to move from the hyper-literate aspects of the piece to the visual ones. The words are just as important to the semiotic description of this piece as the images are. “It is by combining words in multiple ways that we can seek to render the particularity of experience. (Chandler 6)”[2] All of these words are combined to evoke different feelings.

I argue that the title, Take Your Choice, is both a symbol and an icon. Even though “language in general, (Chandler 36)”[3] is symbolic, words can also be otherwise. The title acts as a symbol when you associate it with the feeling you get when you are presented with a large number of books. For me, this title evokes emotions of excitement, anticipation, and happiness due to the sheer number of worlds I have access to. The title symbolizes this abstract feeling of adventure. The title becomes an icon when you look at it, think, “oh, it’s referring to the books, asking me to pick one,” and that’s it. The title, the Signifier, resembles the Signified, the fact that the artist wants you to pick a book. You obviously cannot pull a book through the canvas and into the three-dimensional realm, but if you saw “Take Your Choice” written near an actual stack of books, you would pick one up.

From the title, I move onto the year. This year represents exactly what you think it does, the year the painting was made. If you know much about 1885, this symbol may evoke certain thoughts and emotions. The year is what you see, but the historical context is unseen. Without some knowledge of this time period in America, you might miss out on some artistic insights. When we were at the NGA as a class, having knowledge of Morse and the House of Representatives during that time period really helped me extract new meaning from the painting.

Finally, I look at the last line, the medium. Dr. Irvine once quoted Marshall McLuhan in class, “The medium is the message.” I read a lot of McLuhan in undergrad, I know all about The Medium is the Massage, etc. Though the original saying is a bit of a cliché, it still rings true. Oil on canvas denotes high-class and expensive taste. Morse’s House of Representatives was also painted with oil on canvas. This is a well-respected medium. While Peto’s name may not give this painting a six-digit price tag, the medium lets viewers know that this is no cheap trick. (All of this is arbitrary, of course. Oil on canvas has been crafted to mean expensive taste. If finger paint just happened to be more expensive than oil that would be the “fancy” medium.)

Anyways, just look at the frame. It is thick and sturdy; it looks well made. But then look at the painting itself. It is not a painting of a noble’s bookshelf. It is a painting of a literal heap of books, some of them stained and with torn covers, sitting in a simple, wooden crate in front of a chipped wall. The books are not arranged “properly”. They are tossed about, some of them are even lying open.

The Barthes article does a great job of analyzing such things as placement. In that article, the author examines an advertisement that evokes feelings of “Italianicity” with the product placement and colors. The author asks, “How does meaning get into the image? Where does it end? And if it ends, what is there beyond? (Barthes 8.)”[4] These questions can be applied to Take Your Choice. While there are no ethnically specific connotations in this painting, there are definitely other meanings. The bright colors and ragged features evoke feelings of romanticized poverty. I think about jeans that are covered in mismatched patches or the colorful clothes of peasants in European folk art. These books are not elitist, they are simple and welcoming. They are worn and loved, maybe part of some makeshift library following the leave-one-take-one method. That would line up with the whole “Take Your Choice” line.

This is where I start thinking this is super meta. Sure, it’s not a painting of a painting, but it’s a visual representation of a written art form, it is one art form representing another. There is a sign partially visible that says “yo…”, which might be part of “you” which might have originally been part of “take your choice” which would be the title of the piece. In one of Dr. Irvine’s articles, he defines meta as, “A metalanguage is a “language”–a defined set of terms—about language. Metadata is data for describing data. (Irvine 3.)”[5] I know this is not like Morse’s painting of paintings, but this is a piece of art about another piece of art. Here, we find a marriage of visual and written, of imagery and literacy.

The painting itself is an icon, it resembles the subject very well. We know there are books in the painting, as well as a crate and a wall. What meanings we make based on this knowledge is related to a myriad of things. Whatever meanings we make, it is important to remember “meanings aren’t in our heads. (Irvine 12)”[6] We do not make meaning in a vacuum, we are influenced by everything around us.

I think this quote from Dr. Irvine’s article sums up that point very well: “The meanings of signs and symbols (any set of meaning tokens used and taken symbolically in a community) are not things but the processes of interpretation initiated and instantiated in the symbolic representations themselves as signs are used to create meanings. (Irvine 22)”[7]

Overall, this painting is one of many layers. I could go on and on describing and deriving meaning from it, but I won’t torture you any longer.

Outside of this attempt at a case study, I really enjoyed the readings for this week. There are several questions and concerns I have (I won’t pretend that reading “As we shall see later, binary (either/or) distinctions are a fundamental process in the creation of signifying structures. (Chandler 48)”[8] didn’t make me freak out just a little bit…). But overall, I liked the readings and learned a lot. My relationship to semiotics is weird because I feel like I’ve been studying it for years without knowing it? Some of these terms, scholars, and systems are familiar to me or remind me of other theories I have encountered. The whole Signifier/Signified thing reminds me of the Ladder of Abstraction in some way, for one thing. But enough of that.