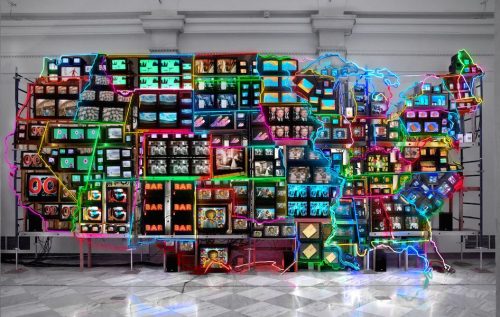 Our group took an affinity to the Paik pieces. Their size, color, and imagery is truly amazing. But why do we feel this way about the two works we saw at The Smithsonian American Art Museum and National Portrait Gallery? And what is going on, both historically and semiotically, when we see these pieces? Our group looks at how Paik’s own history, our interpretations of his art, and historical context plays a part in how we make meaning of these artworks.

The Father of Video Art…

Known as the “Father of Video Art”, Paik’s works often include television sets, scattering them according to certain sculptural forms in order to shift the viewer’s’ attention from the contents (the videos played on televisions) to the sculptural forms (Ryan). His works “saved” people from passively receiving overloaded information from televisions, or we can say, from the mass media. When people stop focusing on the contents, they will have a chance to enjoy video art, to think about how technology has changed the culture (the way people express themselves), and actively make meaningful responses to it. In this way, viewers successfully switch their positions from a passive one to an active one.

From Passive to Active: “The listener becomes the speaker”

Paik’s work Electronic Superhighway: Continental U.S., Alaska, Hawaii can be seen as his response to both popular culture and the Fluxus movement. He explored the relation of the art object to the world outside the object by using real objects, like neon lighting, televisions, and cables, to start artistically live conversations with the viewers. The way he set the televisions and organized the video content, based on distinct identities and cultures of each state, was his response to the content. What the viewers think of, what they understand from the combination, or the relations they make in their minds when they see this work, can be regarded as the response from the viewers. Just as Bakhtin introduced the idea that “any understanding of live speech, a live utterance, is inherently responsive” and “any understanding is imbued with response and necessarily elicits it in one form or another: the listener becomes the speaker” (Irvine, 3).

Our group’s post is just one form of response. All of these posts are our responses to the readings, the art work, the lectures from our professor, and the unique thoughts from our classmates. When we read the materials and share our thoughts with our group member, we are having live conversations with each other. We hear them, we understand them, and then we update our responses. One evidence of these responses is the repetition of words and phrases from the readings and the lectures. Bakhtin understood that our speech, including creative works (for example, the work of Paik’s), is “filled with other’s words”, “varying degrees of otherness” (Irvine, 4). We rework these words and use it to express new meanings.

This is exactly what Paik did with Electronic Superhighway. Apart from the content on screen and the sounds from televisions, we can also notice the “otherness” by referring back to earlier works from Paik, such as Magnet TV, TV Gardens, and V-yramid. We can see a clear process of Paik establishing his aesthetics and techniques of using televisions as a creative medium, from one television to a whole sculpture of television sets. In these works, Paik continually expressed his understanding towards the question of how to interact with technology and then responded to the question. In Electronic Superhighway, he highlighted the concept that new technology enables people to communicate with each other across traditional boundaries, like the state borders, but also, people should be aware of the information overload problem caused by the new technology.

Breaking down the Electronic Highway and Megatron/Matrix… 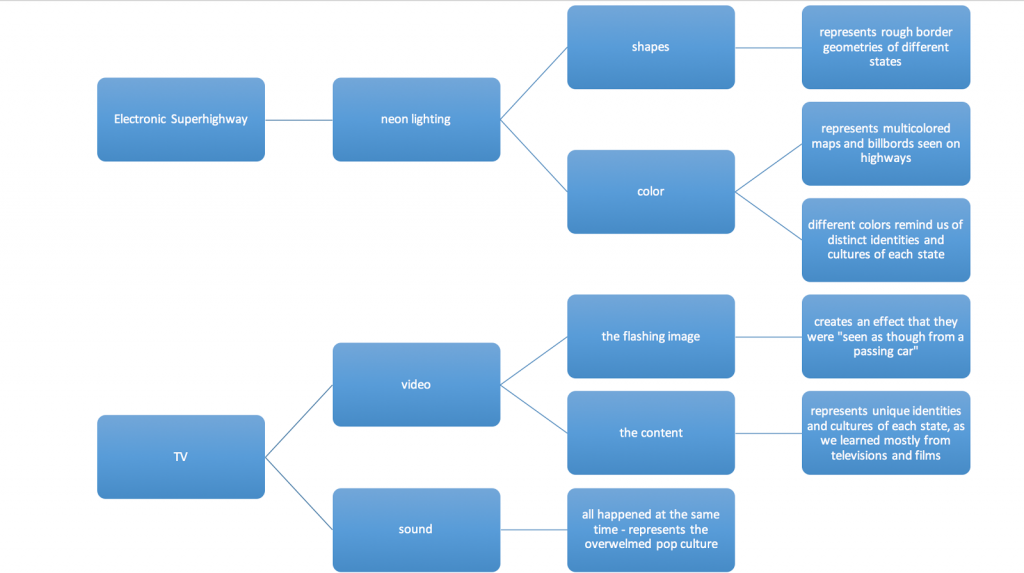 We can explore different levels of the dialogic relationship between Nam June Paik’s works, the art movement he was part of, the technology he used, and the museum his works are featured in. If we put the Nam June Paik’s works in the center of the meaning map, we can discover various dialogic expressions which are based on various culture encyclopedia.

Paik’s Megatron/ Matrix is composed of 215 monitors. The monitors focus on clips and sounds from the Seoul Olympics and Korean rituals and dance. The work is about the size of a billboard. The changing colors and clips grab the viewer’s eyes, making the piece of art visually appealing.  The Seoul Olympics on screen can be recognized as a window to discover the world and a platform for people from all around the world to communicate with each other. In past eras, people could only watch the Olympic Games by going to the city that held the games. With the development of telecommunication, people can watch the Olympic Games on television in their own home.

We are connected to each other by monitors. “Smaller clips play simultaneously on multiple monitors, while larger, animated images flow across the boundaries between screens, suggesting a world without borders in the electronic age.” (Search Collections). The changes of the images and videos on screen make the piece somewhat interactive, because the viewer is watching what’s going on. The art piece as a whole could be a visual metaphor for the media being an overwhelming part of our everyday lives. Paik uses the monitor which is a electric appliance in our daily life to deliver his concept of idea.

This piece of art can be recognized as a prototype of Paik’s video art. “Video art is an art form which relies on moving pictures in a visual and audio medium” (Wikipedia). It is difficult for the audience to understand the meaning each monitor represents at the first glance. But if we know about the feature of the prototype, it is easier for us to understand how this genre of art focuses on the combination of these monitors and delivers a message that we are assaulted by too much information in the pop culture. Paik’s works stimulate us to critically think about the way we receive information in today’s society. We are exposed to a lot information through television monitors, computers and smartphones. But is the information valuable for us to read or digest? Do we ignore the meaningful details in real life while we immerse ourselves in the information in the monitors? These are some important questions to consider…

Paik’s work also has a dialogic relationship with the Fluxus movement. “Fluxus is an international and interdisciplinary group of artists, composers, designers and poets that took shape in the 1960s and 1970s.” (Wikipedia).  Fluxus pledged to be artistic interdisciplinary in defiance of conventional painting and sculpture. This movement also focused on the artist-audience interaction (Hopkins, 2000). Paik was a member of the Fluxus movement that applied interdisciplinary knowledge to his art, including music and engineering. Paik’s works close the gap between art and life. He combines elements which are frequently used in everyday life in his art. He endows them with a new meaning and facilitates us to criticize the problems in our life. The Greek philosopher Heraclitus endorsed the principle of flux as an “Act of flowing: a continuous moving on or passing by… a continuous succession of change” (Hopkins, 2000). This feature resonates with the idea that the dialogic expression is “unfinalizable, always incomplete, and productive of further chains of responses: meaning is never closed and always oriented toward the future.” (Irvine) The meaning of Paik’s artistic works changes with the time and space. Even though our generation spends more time watching online videos rather than television programs, we are still facing the potential problem of overwhelming information.

One way to look at Paik’s work is through a literary lens. The concept of overwhelming amounts of information pops up a lot in the 1980’s science fiction subgenre, cyberpunk. One person in our group, MC, describes her initial reaction to Paik’s Megatron/Matrix:

“It was like riding a 1980’s cyberpunk wave. It was, in the words of writer William Gibson, “Like city lights, receding into the distance…” (Gibson, 1984). I could stare at the thing for hours. It was mesmerizing.”

(Yes, cyberpunk may be a somewhat outdated subgenre of science fiction, but the aesthetics of the genre are embodied in Paik’s work.)

The reason why this piece is mesmerizing is certainly different now than it was when it was first created. The context of the era is key to how we interpret artwork. When Paik first decided to combine the digital with the artistic, we’re sure people were simultaneously amazed and confused. He pioneered a new form of art. Nowadays, we see his work through the lens of our era. We are more accepting of these strange combinations. We think in these types of metaphors. Viewing the digital and the analog as cohesive is something we are better at doing (no offense to the people of the past). People who understand the amount of effort that goes into digital art do not question whether or not what Paik did is art. We can imagine someone from another time asking, “how is this art? All he did was hook up some TVs,” unaware of the complexity of programming and aestheticism.

The way Paik frames this particular artwork makes you rethink what art can be. Art does not have to be classical or traditional or elite. It can consist of neon lights commonly associated with cheap advertisements, it can use looping images and sensory overload to achieve a certain effect. The sound emitting from the televisions is art in itself. You make meaning of that high-pitched ringing. The sound becomes the audible signal that you are moving into a space of hyper information, all of it thrown at you at lightning speed.

Artists that take risks by using abject mediums have the potential to be pioneers. The television was, and still is in a way, considered by many people to be some kind of detriment to society. Scholar Neil Postman considered it to be a type of “soma”, a drug used to placate and confuse the masses. Many people in our group’s age bracket can probably recall hearing someone claim that the TV will surely rot our brains. We aren’t saying Paik was trying to completely subvert negative views of TV, but he certainly took a creative risk using televisions and pre-recorded images in his art. When we first saw these TV screens, a thought that crossed some of our minds was, “wow, it’s almost like he invented the GIF with his artwork.” So we can look at his pieces and see things we relate to, like GIFs and memes and Tumblr aesthetics, and someone in the past could do the same.

Anyone can make meaning out of Paik’s work. Whether you look at it and feel overwhelmed, excited, or terrified is up to your own semiotic process…

Below are some more examples of Paik’s work, as well as a photo of Paik himself. While his works are all unique, they share similar themes and styles: 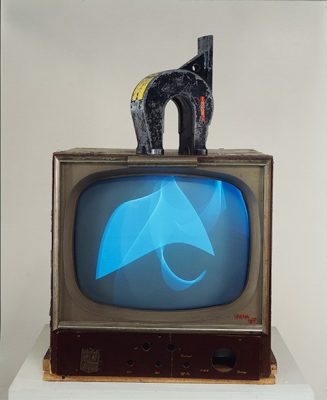 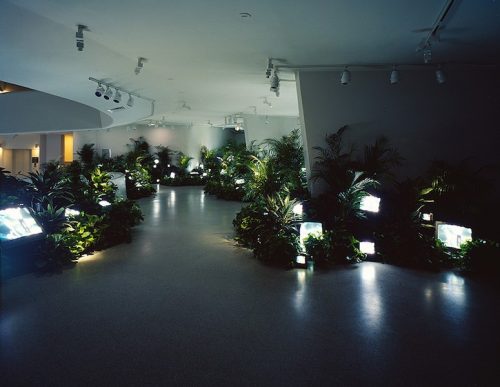 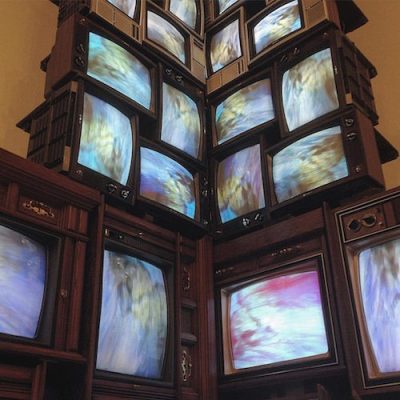 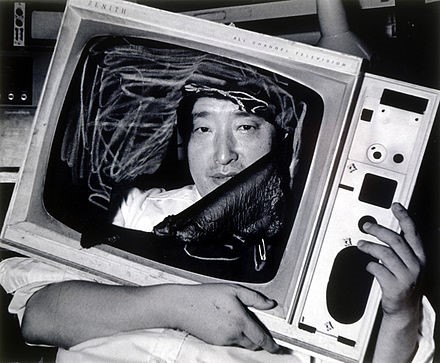