Our group was drawn to different aspects of Lautrec’s work. From the bold prints to the use of space, the subject matter to the Japanese inspiration. In our post, we discuss some of the pieces we love and why…

Lautrec’s work is so famous, I recognize his work before I recognize his name. The image of the black cat, poised and perched upon a red box, is truly iconic. I have seen this image printed on handbags, puzzles, and T-shirts. This image is a type of cultural capital that Bourdieu talks about in his article, it is cultural capital in an objectified state, which is, “the form of cultural goods (pictures, books, dictionaries, instruments, machines, etc.), which are the trace or realization of theories or critiques of these theories, problematics, etc” (Bourdieu 17). Le Chat Noir is an image that be collected, hoarded, critiqued, praised, etc. It is a cultural artifact that reflects the Golden Age of Paris and evokes these same feelings of decadence and allure.

But I don’t really want to talk about Le Chat Noir. Yes, it is a fascinating and striking piece. The cat sitting in a halo of red and gold is beautiful, for sure. I like Lautrec’s famous pieces, but it is his less famous pieces that really intrigue me. The preparatory sketch for Woman Lying on Her Back, Lassitude, is more beautiful to me than the finished product. It is soft, evocative, and contemplative. My opinions on which is better, the finished or unfinished, do not matter, but the context in which these pieces were made does. 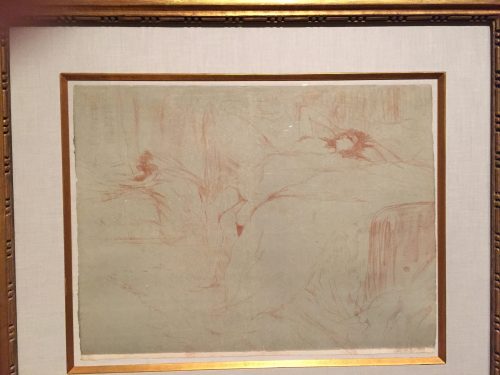 Lautrec “interpreted the world of prostitution without moral judgment” (The Philips Museum Lautrec Exhibit). His interpretation of prostitution seems pretty modernist to me. Modernism “criticizes from the inside, through the procedures themselves of that which is being criticized” (Harrison 5). In the case of the prostitutes, Lautrec does not critique them, but rather, illustrates their most intimate moments of their lives. He goes inside, into their private worlds where they do their hair, bathe, and relax, and critiques public opinions of prostitution. Maybe this is a bit of a stretch, but that’s how I see his paintings of these women.

Lautrec took a truly modernist approach in critiquing the celebrities of his time, drawing them as conventionally unattractive and unflattering. His use of space is also extremely modernist and all that, but I think his subtle subversion of how we view sex workers is especially modernist. (Yes, I know Harrison doesn’t think modernism is subversive, but this is the word I choose to use here.) The description of the collection explains how people were confused by his works because they were not overtly erotic. “Elles (the name of the collection of prostitute pieces) was a commercial failure, perhaps because it did not deliver the type of fantasy that collectors expected” (The Philips Museum Lautrec Exhibit). Lautrec interpreted a profession that is confusing to many by making pieces that were, in fact, confusing to many. One critic said, “The meaning of the work is still unclear to us; the desired effect cannot be seen. He portrayed the vice, but not because he was attracted to it, since he avoided the obscene details” (The Philips Museum Lautrec Exhibit). While I have plenty of words for that critic, some of which are sexist and objectifying and ignoramus, I won’t go off on that.

All of the pieces in Elles represent a very interesting side of Lautrec. They are not the bold, gigantic posters that once wallpapered the streets of Paris, but quiet pieces that went commercially unnoticed. I like them because they are different from his more successful works. He draws these women beautifully while drawing the privileged in a hilariously vulgar way, which I think says a lot about who he was.

As concluded by Steve Edwards in the introduction of Art & Visual Culture 1850-2010: Modernity to Globalisation, one way of thinking about modern art is “to view it as responding to the modern world, and to see modern artists immersing themselves in the conflicts and challenges of society” (22). This indicates that some modern artists conveyed the emerging commodification process of everyday life and also the process of urbanization in their art works. Thus, we can view these modern art pieces as a way of reflecting the transformations of modernity. Take The Englishman at the Moulin Rouge and At the Moulin Rouge, La Goulue and Her Sister as the examples of this idea. In the description of the art work, it mentions that: 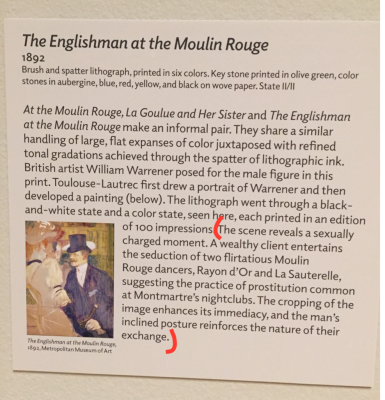 The practice of prostitution, which was common then, can be seen as one of the reflections of the commodification of everyday life in the 19th century, when the poster was created (in 1892). In the poster, if we compare the image of the Englishman and the images of the two dancers, we can notice that they differ greatly in presenting styles, as showed in different colors. The Englishman has only one color, which makes him unique to the other part of the poster, like the background and the two ladies. From our points of view, these differences highlight the transformation of commercialized society, which helps to reveal the conflicts between new emerging commodification and the traditional entertainment industry at that time. 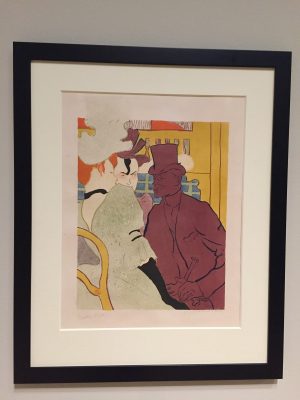 The uniqueness of the “original print”

Lithographs, photographs and other forms of art that can be mass produced all face the challenge of how to stay valuable when they can be easily copied. Therefore, in the art market, collectors value and collect the original print of the art work and the artist-authorized printing. The description below supports this view, as it underlines that limited and rare art works are valuable for the collectors, and they are created by the artists, dealers, and the publishers. We can see the uniqueness of the original print through the imperfect details of the posters, which have printing lines, incomplete colors, and the special numbers signed by the artist. 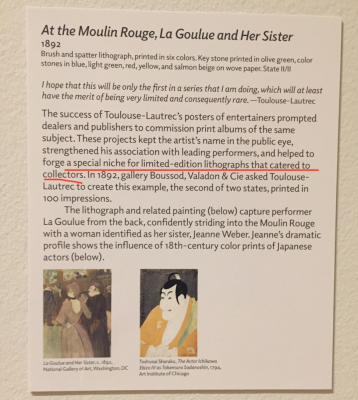 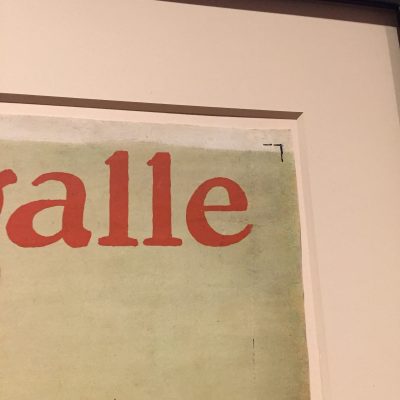 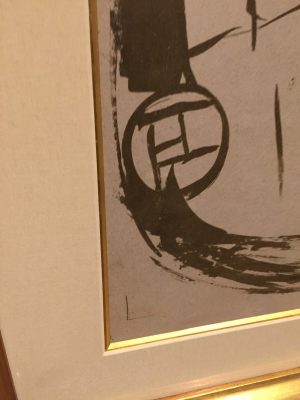 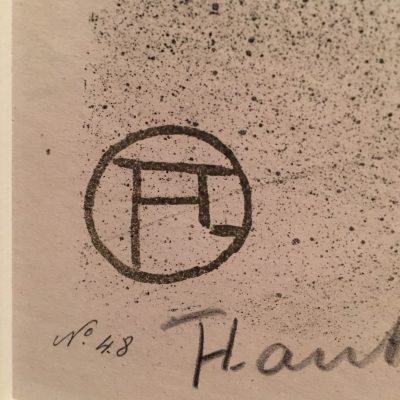 One of the unique aspects of Toulouse Lautrec’s poster is that Lautrec absorbed the qualities of aesthetics of ukiyo-e print which include elongated pictorial formats, asymmetrical compositions, aerial perspective, spaces emptied of all but abstract elements of color and line.

We can see how the dialogism between Lautrec and Japonism (refers to “The influence of Japanese artistic and stylistic theme upon Western art “) under the social-historical context (ukiyo-e). After Japanese ports reopened to trade with the West in 1853, a tidal wave of foreign imports flooded European shores. On the crest of that wave were woodcut prints by masters of the ukiyo-e school which transformed Impressionist and Post-Impressionist art by demonstrating that simple, transitory, everyday subjects from “the floating world” could be presented in appealingly decorative ways (Japonisme).

As you can see, both economic activities and cultural communication had great impact on the artworld and artists. Take Lautrec’s Divan Japonais as an example, we can analyze how Lautrec took advantage of Japonism to create his original and innovative artworks. 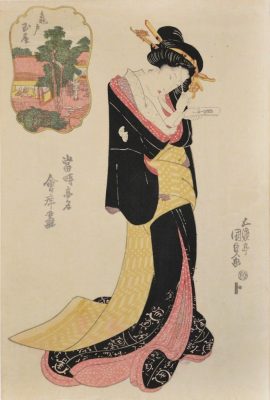 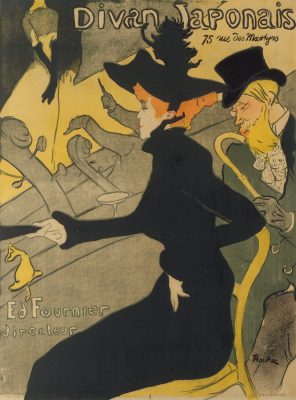 In his 1892 lithographic poster Divan Japonais, Lautrec immortalizes what was then an already fading Parisian establishment. The scene at the café-concert Divan Japonais, which lives on in hundreds of reproductions, summarizes the inimitable experience of a night out in Lautrec’s Montmartre. For its striking lines, vivid colors, and composition, the poster has known a timeless success that has long outlived the club it advertised.

Lautrec reinforces the Japanese motif with his technique, modeling the lithograph in the style of a Japanese ukiyo-e woodblock print. The expanses of flat color, unmodulated hues, and crowded composition point to the artistic influence of ukiyo-e masters and the popular interest in Eastern aesthetics, of which the Divan Japonais was itself a physical monument.

The parallels in social function between ukiyo-e woodblock prints and lithographic posters are numerous: both art forms, by nature of their affordable and reproducible qualities, had socially leveling effects in terms of artistic engagement and ownership. The convergence of art and lithographic technology indicates that “Modernist art belongs to the same historical and cultural tendency as modern science” (Frascina & Harrison, 1983).

Lautrec’s artworks have dialogues with Modernism through their artistic style and theme. The flatten surface, the shape of the support and properties of the pigment in Lautrec’s posters were once recognized as negative factors by the Old Master. However, these limitations are regarded as positive factors and acknowledged openly by Modernist painting. Lautrec’s artworks were liberated from norms of practice or taste and obliterated the boundaries between high (painting, drawing, sculpture) and low (posters, logos and other forms of visual culture) art.

The posters we have seen in the Phillips Collection were massively reproduced and originally sold for few francs. But nearly one quarter of a million was paid recently for Toulouse-Lautrec’s Moulin Rouge – La Goulue. This and other works of the period will continue to rise in value (Vintage Posters). How did the posters’ commodity value change? Besides the scarcity of original copy and unlimited demand in today’s society, the “symbolic capital” was added to the posters by actors (agents, art dealers and publisher…) and institutions (museums, galleries and exhibitions…) in the artworld. “’Symbolic capital’ is to be understood as economic or political capital that is disavowed, misrecognized and thereby recognized, hence legitimate, a ‘credit’ which, under certain conditions, and always in the long run, guarantees ‘economic’ profits” (Bourdieu, 1980). Take Lautrec as an example, his artworks possess the “symbolic value” of depicting Parisian’s life of different class in the nineteenth century, reflecting the influence of Japonism and Modernism. Besides, knowledgeable poster collectors, art critics and museums such as the Phillips Collection add more value to Lautrec’s artworks through transaction, commentary and display.

Bourdieu, Pierre. “The Forms of Capital.” Handbook of Theory and Research for the Sociology of Education (Westport, CT: Greenwood Press, 1986): 242-258.