“Red, green and yellow polka dots can be the circles representing the earth, the sun, or the moon. Their shapes and what they signify do not really matter. I paint polka dots on the bodies of people, and with those polka dots, the people will self-obliterate and return to the nature of the universe.”
—  “Infinity Nets”, Kusama Yayoi Autobiography

Phillip Kennicott’s review of Hirshhorn’s Kusama exhibit in The Washington Post highlights one of the major problems that we’ve been working with this semester. In response to reviews of the exhibit that argue systems theories and cybernetics are central to the work, Kenniccott says, “It’s not that it’s wrong to intellectualize Kusama’s work; but it is very wrong indeed to intellectualize it in a way that annihilates Kusama herself.” How do we solve the problem of creating museum exhibits and media that interface to the meaning systems that gave rise to them? When there are theories of interpretation that tend to privilege the position of the observer over the intention of the artist, how do we create a framework of interpretation that  simultaneously acknowledges the artist’s intention, the power of the observer, and interfaces to the artists with which Kusama is in dialogue? Of course, Hirshhorn’s choice not to put strong emphasis on Kusama’s mental health history is very much that – a choice. The pros and cons of this choice we leave to you, but what we intend to do here is briefly discuss our impression of the exhibit, put the exhibit in a dialogic model with other artists, and how the exhibit contributes to this dialogue.

Dots, in many people’s eyes, are just simple shapes that are everywhere, while the polka dots constitute the key components in Yayoi Kusama’s art work. Although only 20 seconds are allowed in every infinity room, I felt as if I was completely immersed into the world of infinity, especially when in the room Aftermath of Obliteration of Eternity, which was my favorite, the dim light sparkling and it was just like in the universe and I was one of those little stars. As a grown-up, I felt like having thrown away the stress all of a sudden when looking at those lovely dotted pumpkins and looking back into my childhood.

While watching the documentary Yayoi Kusama: I Adore Myself, I was even more impressed by this genius and lovely avant-garde artist. Suffered from unfortunate early years and long-term mental illness, she always wants to commit suicide, but just as what she said, “I would have committed suicide without art” – art is the only thing she values so much in her life, and she keeps pursing the essence of life and death and represents the eternal theme in her art work. She adores herself and her art work more than anything else in the world, while she’s conscious about the philosophy of life and death within her world of polka dots; she’s genius and most importantly, persistent in her art creation – she completed a series of 50 creative paintings in 2008. (Documentary, I Adore Myself) 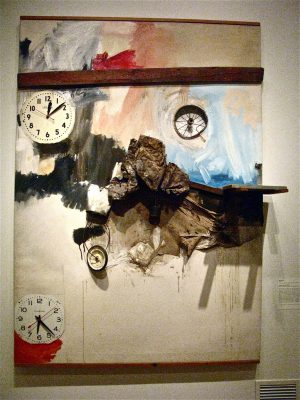 Jo Applin poses Kusama’s Happenings work in dialogue with Robert Rauschenberg’s collage pieces (and of course, Allan Kaplow credited with coining the term Happenings for performance pieces). In the same way Rasuchenberg blurs the line between art and life by including everyday objects in his art, Kusama blurred the line by bringing her art into the streets and rooftops of New York City (Applin 16). Kusama’s work takes this further in re-imagined everyday objects, specifically in the form of Boat, a boat made of phallic pillows, and Obliteration Room, an all white room with all white furniture on which observers, or more appropriately participants, put stickers. And of course, an evocation of line blurring can’t do without at least a small nod to the Surrealists. Early 20th century European avant garde is a strong foundation on which a dialogic model for the Postmodern works of mid-late 20th century art can be built. 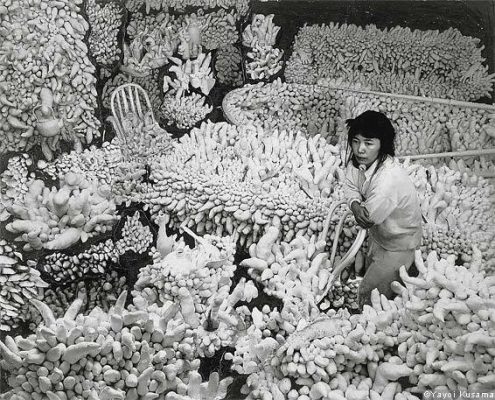 The exhibit, by centering and emphasizing Kusama’s Infinity Rooms, highlights the net and polka-dot patterns that inspired much of Kusama’s early work, which she admits was inspired by hallucinations and obsessive compulsions. Just the sheer number of phallic pillows and knowing that she individually sewed each piece, or closely looking at the net patterns of her paintings certainly supports this understanding. While the paintings and sculptures clue us in as observers, the Infinity Rooms inform us as participants by placing us as subject in the center of the piece. We are then free to meander our infinite reproductions, the many iterations of us in a room fool of hanging lights, glowing pumpkins, or blow-up polka dot balls. While each design choice emphasizes a specific aesthetic, the design of the infinity room extends that aesthetic into infinity and places us at the center of this infinity, ourselves becoming infinite.

In thinking about how the exhibit could interface to the meaning systems that give rise to it – in many ways it already does. In a digitally augmented social world, a name of an artist or a name of a piece is what we need to start researching. Besides the background readings for class, searching through search engine results and library resources using the artist’s name as a keyword is a great way to dive further into the artists’ work and discover how to place her art. The way the exhibit could do that better is through an augmented reality digital interface that people can access on their phones while they’re in the exhibit. They could develop an app like the AR trail guide for the Sweetwater State Park (Bolter 36). In such a digital interface, pointing the phone camera at a piece could generate pop up hyperlinks and supplementary information that a user can navigate for more context. Or, if someone is in a rush and can’t wait in line, they could point it at the Infinity Rooms and the walls would become see through and they can see a digital representation of the piece. Such an interface would make the exhibit more interactive (as interactive as it already is – I mean, you literally see yourself in it!), and could overcome the information gap that led to readings of the exhibit that Kennicott (And we) took issue with.

For our group project, we’ll be focusing on the Phillip’s Collection exhibit of Henri de Toulouse-Lautrec. Specifically, we’ll be addressing how showing different versions of a single piece in different stages of production interfaces to the lithographic production process. We hope to extend this to talk about Toulouse-Lautrec’s pivotal role in elevating the artistic status of print-making and posters. On our poster, our design idea is to first show Jane Avril in the different stages of production as was 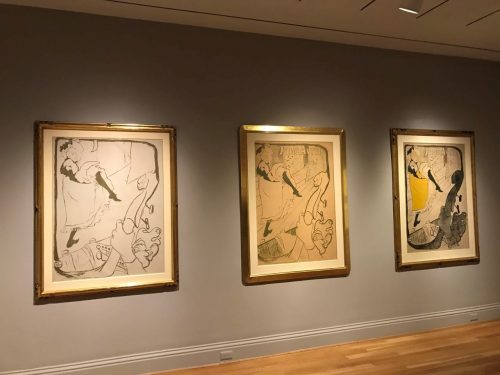 displayed in the museum as our primary image. Our secondary image will be a lithograph slate with a half-finished print on it and next to it will be a stack of prints. We will supplement these images with text that specifically treat the exhibit as an interface and highlights Toulouse-Lautrec as a key figure in the history of print-making and posters.