An Analysis of Paik’s Electronic Superhighway

“In the years around 1960, U.S. Pop artists made art that held up a mirror to their image-saturated society, reflecting immediately recognizable images of itself, as fast as it could produce them.” (Terry Smith, p. 24)

Entering the Lincoln Gallery was an experience of its own. The monumental gallery has a different aesthetic from its classical main-museum counterpart. Where the main Smithsonian American Art Museum incorporates natural light, classical architecture, and gilded furnishings, the Lincoln Gallery is almost exactly opposite. The Lincoln Gallery has grand vaulted ceilings, columns, and walls painted in a stark white paint to allow the contemporary works it houses to be the focal points for viewers. The gallery acts as a blank interface to avoid setting the mood for viewers. In addition, the Lincoln Gallery has all of its blinds drawn, allowing no natural light to permeate the gallery space. The white blinds blend with the white walls, allowing no interruption of nature or distraction of movement from outside. 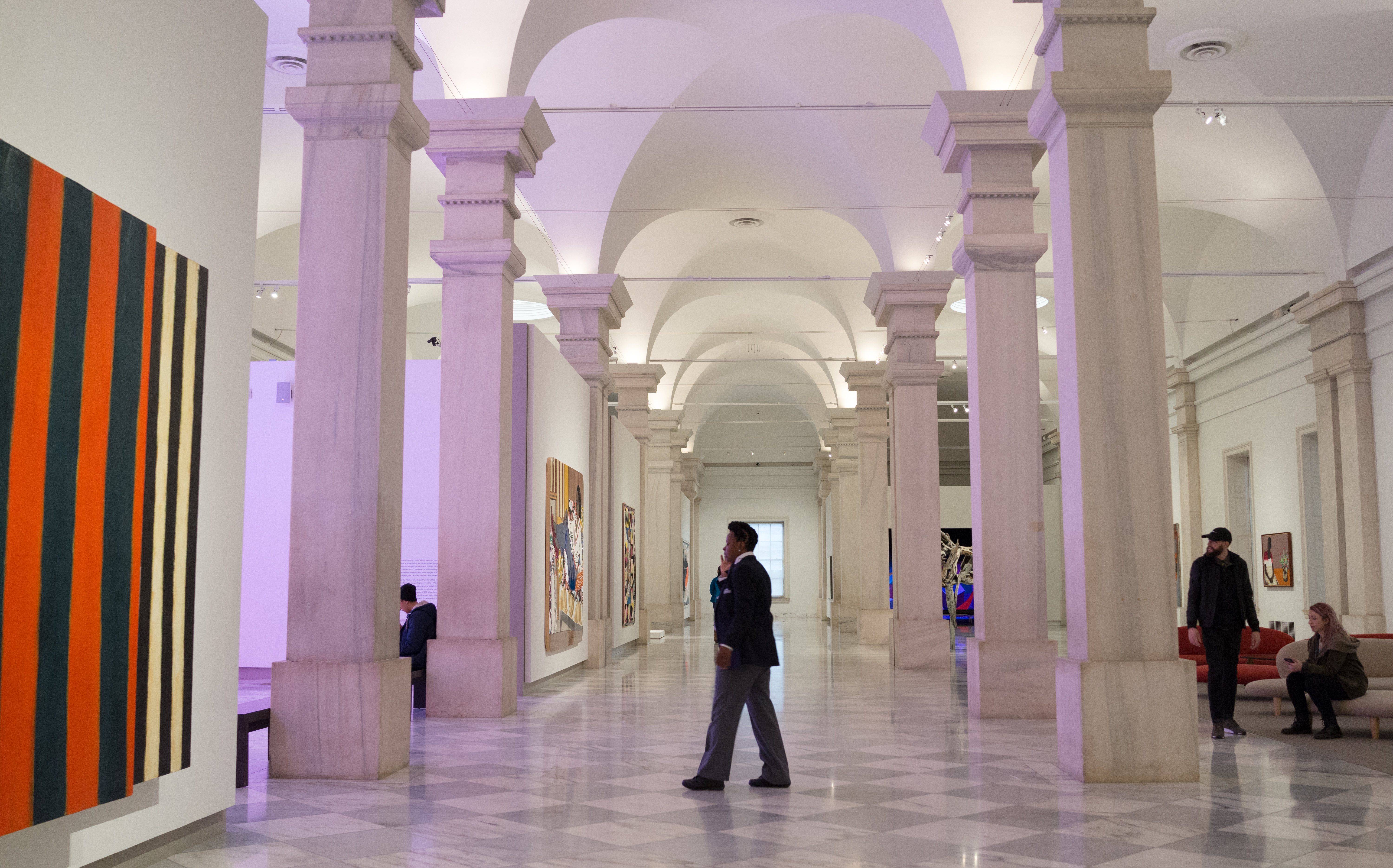 Walking through the gallery, we were immediately drawn to the immense multimedia work Electronic Superhighway, by South Korean artist, Nam June Paik. “Constructed of 336 televisions, 50 DVD players, 3,750 feet of cable, and 575 feet of multicolored neon tubing” (SAAM website), we were taken aback at the overwhelming wave of audio and visual information. The flashing neon lights outlining each states and the video dialogues playing over each other made it hard to focus on any single portion of the immense multimedia work. 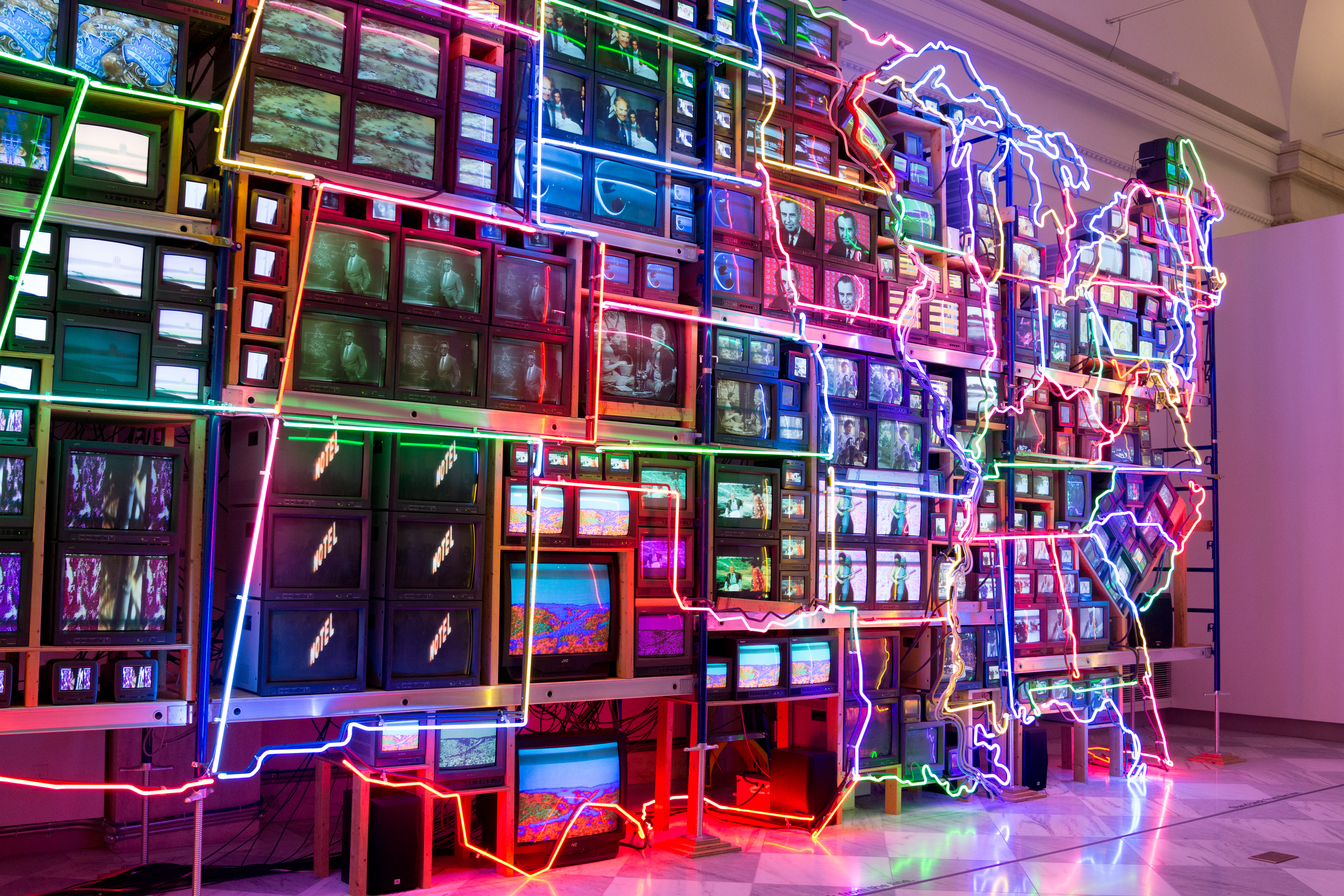 That being said, when our senses recovered and we were able to comprehend what we were viewing, we noticed several key dialogues all occurring simultaneously. First, and perhaps most obvious, was the literal dialogue between the states. Many of the states had videos with audio scripts that played over each other. Not only does each state contradictorily communicate with another, but these communications rely heavily on the principle of semiotics to understand what is truly being conveyed. For instance, In Kansas, clips from The Wizard of Oz play. Idaho’s video consists only of images of different brands of potatoes. Texas is alternating images of cowboys and horses. This ‘territorial’ iconography is an example of the principle of semiotics in that each image relies on the viewer’s cultural knowledge to make sense of its meaning. Because each video is indicative of the state’s cultural identity, viewers need prescribed knowledge of each state’s clichéd identity to fully comprehend Paik’s message about American culture. In Paik’s case, his message is “the social imaginary, the shared symbols and values belonging to a [state’s individual] culture” (Smith, p. 23). The cultural iconography found throughout Electronic Superhighway “forms a dense network of symbolic relations” that serves to educate viewers on perceived American ideals (Remix and the Dialogic Engine of Culture, p. 20).

Next, we noticed the dialogue between art and technology. Most of the other works in the Lincoln Gallery are composed of various forms of non-digital, physical medium. Paik is innovative in his “hybridization” of art and technology (Remix & the Dialogic Engine of Culture) in both the physical art space (the TV monitors that comprise the individual states) and the digital art space (the programming of the televisions to play his clips and audio on a loop).

The next form of dialogue we encountered was between Paik and the viewer’s of his work. Paik utilized jarring neon light tubes and moving images to reflect his impression of American interests. The auditory and visual overload serve to question American societal interest and reliance on digital media. Paik is conversing in the sense that his creation forces viewers to question their own cultural ideals.

Finally, we noticed a theoretical dialogue between curators and the artworks in the Lincoln Gallery. The gallery curators have meticulously arranged the works and effectively set the stage for viewers to enjoy and question the gallery’s pieces. By creating themed alcoves (alcoves focusing on color field works, alcoves with works incorporating text, etc.), curators have created a method for grouping the gallery’s contemporary works into manageable portions. Simultaneously, the curators have suggested a form of hierarchical importance among the works. Due to its large size and abundance of electrical equipment, Electronic Superhighway is housed in its own alcove. Perhaps this is indicative of its importance as a piece of work to be enjoyed on its own?

The dialogic principle that works across these various dialogues within the Lincoln Gallery and Electronic Superhighway “extends beyond local situations of expression, to the continuum of reinterpretation in cultural forms through historical time.” (Remix…). Paik has expressed his viewpoint in his interpretation of America’s heavy reliance on digital media. In this work especially, Paik’s differing viewpoint from many Americans in the 1990’s (when the work was created) on American cultural norms is essential to the idea of a conversational piece, or the work’s ‘dialogism’ (Remix…).

Nam June Paik was not only the creator of Electronic Superhighway, but also the father of contemporary video art (SAAM website). Paik’s jarring artistic expression of the allegory of ‘normative’ American media culture exemplifies aspects of dialogism and semiotics, but most importantly serves as a ‘prototype work’. Electronic Superhighway is a prototype for ‘conceptual art,’ meaning that the concept that the piece represents is more important than the physical manifestation (Irvine). Furthering the idea of ‘conceptual art,’ Paik’s piece relies on “conceptual frames [that] depend on cultural and subcultural encyclopedia of collective knowledges, values, and codes that provide collective ground for interpretable meanings. (Remix…)”. The dual conceptual nature of Electronic Superhighway (representing both a prototype of ‘concept art’ and the conceptual principle of semiotics) in its message of America’s outrageous reliance on television, expressed through various video monitors, effectively intertwines culture, media, technology, and art, making Paik a truly interdisciplinary artist. 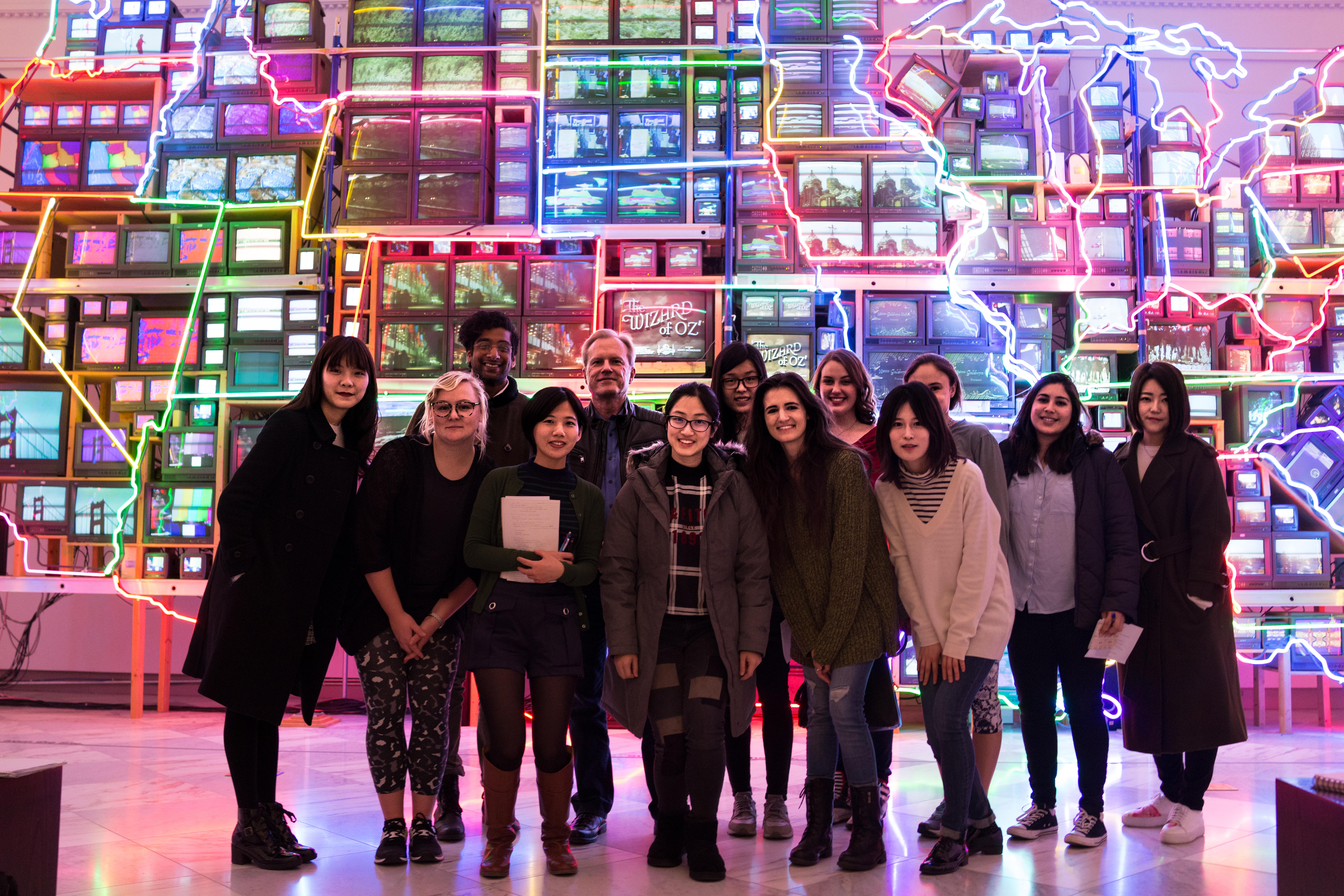