The post-photographic era of image production is unique, in that it preserves the “aura” (to use Walter Benjamin’s loose terminology) of photography, while being almost wholly removed from the analog photography process. Martin Lister, drawing from Raymond Williams, describes it as a residual form of culture (pg 6). The digital photographic image is not photography as it has historically been, but the cultural form has been preserved. In this entry, I would like to explore how the portrait as a photographic form has evolved through different eras of photography. 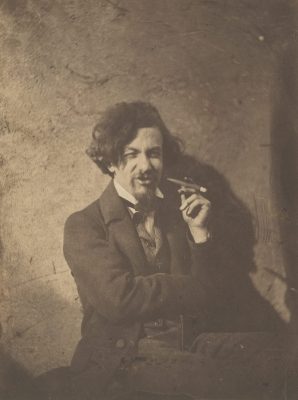 The above photo of Gustave Le Gray was taken in 1854, right before the era of “Cardomania” took off (Buckingham 15). Cardomania refers to the takeoff of celebrity portraits in the 1860s. They would involve elaborate studio backdrops and clamps to support the back and neck as subjects sat for great lengths of time during the exposure. This is a special moment in photography because it was a paper print made from a glass negative. Gustave Le Gray conceptualized the callodian process that replaced daguerrotypes and calotypes that used wet glass to create negative images from which paper prints could be made, though its invention and implementation was credited to Frederick Scott Archer (Buckingham 11). In the portrait, Gustave is making kind of a goofy face while he smokes his cigar. In contrast to the my Snapchat images later, the backdrop of the portrait makes this much more a portrait style of photography. 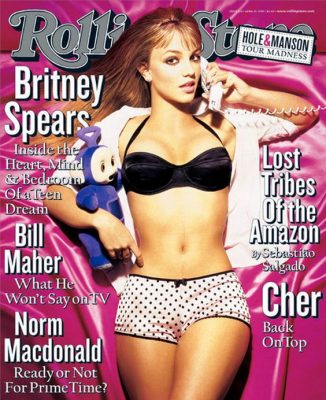 Comparing that to this image of Britney Spears is not too different. I couldn’t find much about the technical aspects, but I wanted to discuss the difference in composition. Britney Spears, teen (at the time) pop star, is a fascinating amalgam of hyper-sexualization, adolescent innocence, and media representation. The documentary Merchants of Cool goes into the market research that led to the development of two major archetypes in the mid-90s MTV resurgence: the mook and the midriff. The mook was the male jackass character, like Tom Green and Steve-O. The midriff was a hyper-sexualized and young woman characterized by innocence. Britney Spears rise to fame needed the collaboration of many actors, including the record label, booking agents, music video producers, and TV networks. All parties worked to reinforce a complex media image of Britney Spears midriff character, including journalists. The above Rolling Stone magazine cover from 1998 shows exactly this with the article headline “Inside the heart, mind, and bedroom of a teen dream.” Photography here reinforces the media image of Britney Spears, and is very much a constructed set, kind of like Gustave Le Gray. The portrait plays a much different role in capital pursuits, as the portrait works to reinforce an image that is prevalent throughout several mediums. Photography exists in an elaborate, complex, and rich media network. 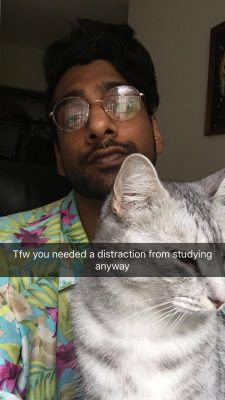 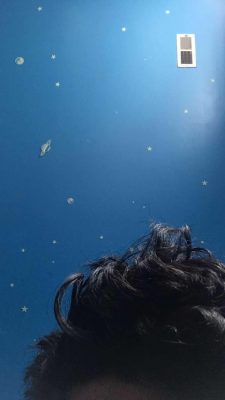 The above images were taken in the Snapchat app. It’s a social media app that lets users take photos to send to friends. When someone receives it, they can view the image for a duration of time (up to 10 seconds) set by the image creator. After that, the image is deleted and gone forever. Users can also create a story, and in this way, the images/videos can be added to a feed in which the image/video temporarily remains (24 hours). The two images above are much more candid. The one with the star ceiling is from when I was home for spring break and my friends who received it would be privvy to this context before looking at the image. Or for those who’ve been to my parents’ house, they would pick up the context while looking at it. The other photo has a caption, an affordance of Snapchat. It shows a moment in which my cat interrupted my studying. The content of the photo images in this context is much more candid than the other two images. I wouldn’t necessarily say they are portraits, but rather “selfies.” Selfies exist in a dialogic model with self-portraits, but that smartphones have cameras built into them are what led to the selfie type. There’s an immediacy and candidness to selfies that are missing from traditional portraits.

When the photograph is remediated through software, the medium of photography gets closer to the semantics of language. Each tokenized use of a photograph doesn’t represent the photo’s ontology, but its use in a specific context. Our language possesses a unique capacity for infinite generativity – that is an unlimited number of combinations (thereby an unlimited number of meanings) built from a limited number of words. As photographs move into the realm of software and the idea of the “original” or “authentic” becomes less significant in the world of photographic images, the syntax of photographic images grows. In Martin Lister’s words, the digital photograph is “fugitive and transient” (pg 8). What a particular photo means depends on the context in which it is used. Of course, we are not there yet. Licensing of images does clearly define an original in a lot of cases within the social context of the internet and social use of an image. However, because the “original” image was probably edited from its own original, we already see a move in the direction of a language-like photography. Furthermore, language still contains the issue of plagiarism.

In thinking about how the original photographer or maker of a photograph cannot control the settings of a user’s screen when looking at a digital image, each token of the photograph has to function as a prototype. We can still consider the photograph, how different colors contrast with other colors within the photograph, whether its composition is of high quality, and if we like it. It’s still a photograph – but we can’t think of it as the exact same photograph as the “original” (if there is one). It’s not like a painting that remains the same collection of matter. It’s a collection of machine code that has to run through a machine and be represented on a pixel grid. The actual “matter” of the photo is built on a circuit of electricity that runs through a pixel grid and sends a message of what color each individual pixel should display. It in itself is already an impression of an image. The only way we can consider it the same as a painting is if we consider a painting’s composed of atoms as analogous to the pixel circuitry of a digital image.