I was always fascinated on the connections that our mind has and relates to the community around us. Why do we make the choices that we make, and why we behave in certain ways?

As Donald explains in his article, there is no such thing as ” an isolated mind”, this idea that our minds are self-sufficient monads bounded by their physical container. We are part of a society, we are part of a culture and as being part of this system, our decisions and choices are usually affected by the environment around us.

In Albania, when I was in the third grade, I had the choice to choose another language that I wanted to study. Since Albania is in South Europe, you would think that a language like Italian would be a very popular language to learn and it would make sense, since it’s location its closer to Albania and it’s easier to go and visit ant practice it. On the contrary, at that time the English language was the most popular language, and when I think back, it was always around us. There were a lot of songs and music that was in English, our tv stations were playing movies in English, you could easily find books in English in the bookstore. Of course there are other reasons why this language was so popular, but at that time, these facts made me choose to learn English instead of another language, so the environment around me played a significant role.

As a singer, when I sang songs in English, I wanted to know the meaning behind the lyrics and not just sing the song. When I first started to learn English and study the grammar, the main difference that I saw from the Albanian alphabet were the number of letters (English has 26, Albanian has 36) and the order of the words in a sentence.

But there were other differences as well. To me, English felt like it was a very polite language. By that I mean that in movies, in books, in everyday conversations, people used a lot of polite words on a daily basis. Later on, when I studied in the US as an exchange student, I found out that the politeness was not only a thing in the language, but also in the culture. People tried to be polite and friendly towards each other.

But how is a culture different from another culture?

Well, the easiest response would be that a culture’s identity is based on what is being passed from one generation to another, what traditions are still being kept from one year to another. An example that comes to mind is that is not a law to have turkey for thanksgiving, it is not a law to be welcoming and open and friendly. Examples like this show that there are certain norms, certain traditions that are being passed from one generation to another, and unconsciously, these are contributing to one’s identity, one’s culture.

But that is one part of the story. Since we are part of a community, we are part of a system that is made of tools and machines, languages, writings and books, movies, music and depending on the social, economical factors of a society, the same artifacts may have different representations in different cultures, because of all these different actors.

I believe that we should look at the human mind, and as a person in both biological and cultural factors, and as the research shows they both play an important role in understanding the decisions that we make and understanding the future.

Today we hear the word media in different fields. We hear about Mass media, Multimedia, Social Media, Digital Media. But when was the term Media first used?

As Irvine says, the term media/medium comes from a Latin word, meaning something in the middle, and in an extended sense it means something public. From a human symbolic system, in speech, language, performances, music, the term Media serves as in between perceptible and interpretable elements of a shared, collective, symbol system.

In order to understand the different ways that these terms are used in different disciplines, there are two important things to keep in mind, as Irvine suggests it:

Keeping these two things in mind, it is easier to understand the context behind each term used in different disciplines. Every term is part of a system, a system that has changed based on the social and technical factors from one historic period to another. And the second point is, that any term related to Media/Medium refers back to the sign and symbol systems, serving human meaning systems.

But what is the field  that explains these concepts?

Semiotics is the science of meaning-making processes and symbolic systems. Symbolic systems are used and recognized in many different disciplines, where all human communication, language, learning process and knowledge are based.

In Debray’s approach, media always function in an ongoing socially reconfiguring mediasphere, the whole social distribution of media technologies and genres and how they take on authority, influence. The digital media environment refers to the different types of medium, text, images, video, sound and different combinations of them.

As McQuail explains in his Mass Communication Theory book, there are different actors (time, place, power, social reality, meaning, causation and determinism, mediation, identity, cultural differences, governance) that play a significant role in social origins and communication, whether this is done on a personal level or that of a whole society.

The main idea is that humans can successfully communicate, exchange information using different kinds of mediums. Different technologies were used in different times.

If we think about one aspect of communication, the one through images we can see different technologies being used in different times. 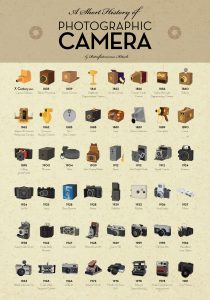 This is one of the many examples that in different periods of time, different technologies were used to communicate meanings, and these technologies change with the society, hence they are part of a socio-technical system.

I am interested to learn more about these transitions, different media, different ICTs, from one historic period to another and the differences in different interdisciplinary fields.