Before diving into the materials for this week, I did have a hard time figuring out why the computer would be regarded as “metamedium”. Now I probably still couldn’t say I’m 100% accurate on the topic, but I do feel the power that computer has in absorbing all kinds of media and mediums, simulating, and transforming them, integrating them to form synergy, while providing them back with new possibilities and potentials. It’s like an incubator and a black hole at the same time, and that’s the truly fascinating part about computer and its “meta” characteristic.

Here’s one of my favorite quotes of the week:” Another important type of software epistemology is data fusion— using data from different sources to create new knowledge that is not explicitly contained in any of them. For example, using the web sources, it is possible to create a comprehensive description of an individual by combining pieces of information from his/ her various social media profiles and making deductions from them. Combining separate media sources can also give additional meanings to each of the sources. Consider the technique of the automatic stitching of a number of separate photos into a single panorama, available in most digital cameras. Strictly speaking, the underlying algorithms do not add any new information to each of the images (i.e., their pixels are not modified). But since each image now is a part of the larger panorama, its meaning for a human observer changes. The abilities to generate new information from the old data, fuse separate information sources together, and create new knowledge from old analog sources are just some techniques of software epistemology.”

There is really a great indication of the vitality that computer and all the architectures on top of it could bring to the areas and disciplines involved.

From my perspective, the procedure of HCI evolution and the “metamedium” ecology around the computer is also a history of the mutual education of computer and human – Before we get used to a smartphone with built-in camera, people would question the necessity of this idea: why would I need a phone that could take pictures? But now we are so used to using phones as our primary photographing tools and even handle a great part of media production on it. Again – using smartphones for PS and video editing is something that didn’t happen until smartphone as a platform digested camera as an appropriate unit and the hardware development entitled the platform with the capabilities to do so. And this trend might have – to a great extent – led to the popularity of SNS like Instagram and Snapchat. 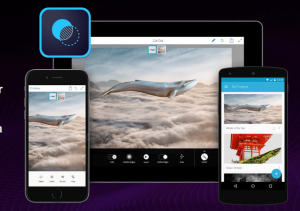 This helical trajectory also reflects the power of the idea “metamedium”, it empowers, and it gets empowered.