Introduction:
There are infinite quotes about music and it’s ability to transcend your words, quench your soul, and make your feelings known.  However, it is difficult to actually grasp the meaning of the notes that strike your heartstrings and the notes that “take you to another place”.   For this week, I would like to skim the surface of music’s position in linguistic studies through the actual meaning of the language and the use of language.

When reading about symbolic language, I could not help but go back to the example of music. By looking at language as a form of expression, new definitions of meanings come out to play. These characters are useful specifically when “symbolic” language is compared with music. So I would like to look at the contruction of words and how they are paired with music.

Oftentimes when a musical or an opera begins, there is a musical prologue. This prologue not only introduces the audience to the music, but the prologue gives the audience something to look for. The tease of the prologue changes when the lyrics are added. Therefore, in the beginning of the opera, the music was something to listen to detached from any meaning other than an introduction. But, during the performance, the notes from the beginning start to have depth and meaning.

Pink Martini- Words vs. No Words

Another area of interest, includes the power of words. These videos below exemplify the power of words compared to the power of humming. Both videos are powerful and create certain emotions. Also, both of the videos have meanings. The difference is the way that the meanings are portrayed by the voice. To connect to the theories from last week, the voice often becomes the gatekeeper. For instance, in the Lullaby song, a multitude of meanings could have stemmed from the notes. However, we are not allotted a specific meaning because of the lack of words. Therefore, the “Lullaby” meaning is up to interpretation and in a way is more marketable for corporations.

However, what about the reverse. If the producer plucks the music from the lyrics is the meaning the same? For instance, the notes in the Ray Charles song “I Got a Woman” are used in the Kanye West song “Gold Digger”. The notes are similar, but the lyrics are different. The meaning of the song is changed.

Ray Charles – I Got A Woman

In addition, some musicals change the lyrics but keep the music. By doing so, the meaning is changed by the language of the lyrics. Below are some examples from the musical Les Miserables.

In the beginning of the musical, Jean Valjean meets a Bishop that introduces him to the saving power of God. Later in the musical (SPOILER ALERT) in the song “Empty Chairs at Empty Tables” the character Marius remembers his friends that fought for what they believed and how they gave up their lives for the cause. He wonders why his life was spared.

Both of the songs use the same notes and seemingly same tempos, but the meanings of the lyrics are completely different. The Kanye West feat. Jaime Foxx example and the Les Miserables examples, demonstrate how the act of keeping the musical notes in a song but changing the lyrics of the song,  obviously changes the meaning. But, this leads to the idea that the lyrics are a form of “expression” and how they can be a form of music. But, the music does not necessarily have to be a lyric.

I’m Not That Girl

I’m Not That Girl- Reprise

In music, people can move in and out of different musical languages. In one part of the song, there can be a heavy jazz influence and in another section of the song, there can be a heavy rock influence (ex: Santigold). If we take the definition of languages to be something similar to a dialect or a different language (English or Spanish) we can see that the usage of different languages in one song adds so much depth and meaning to the song. In some cases, the multiple languages doesn’t change the meaning it just adds beauty and romance to the song. However, in other cases the multiple languages can have different translations from the original meaning.

Does it change the meaning? For instance in Volare, couldn’t the lyrics just be “Fly Oh oh oh oh” or “Let’s fly”. By singing “Let’s Fly” or “Fly” completely changes the smooth quality of the song.

Pronoucing the words makes the difference. In Mambo Italiano, Rosemary Clooney is singing words that could be easily translated to English, yet she adds the Italian pronounciation to the song and this makes all of the difference.

By changing the songs by taking out repeats or not adding other languages, changes the classic status of these songs. Therefore, in many cases the musical language of the lyrics transforms the musical notes. This transformation would not be possible without wonderful singers, but that argument is for another time.

The Drama of Singing

Why is this important? It is important because, of the difference. In reality, most of these songs could have avoided all of the verses by simply saying the feelings. An artist could probably say that they are in love or are one way or another. But, that would decrease creative expression (ex: expression in Ella Fitzgerald‘s voice).

For instance, there are only so many ways that a person can say that they are in love. But, when an artists expresses his or her love on a record, the whole meaning is changed.

The Civil Wars – “Dance Me to the End of Love”

The Civil Wars – Forget Me Not

Norah Jones – “Come Away with Me”

Whitney Houston – “I Will Always Love You”

Language in the form of music is continuously linked to meaning. The meanings are ever-changing depending on the context of the content. Through musicals, the observance of two languages in one song, and love songs we can see that music has a powerful message. This message is an extension of the expression of language. Not only does music express “what feelings sound like” but it also gives more depth to feelings that can be hard to explain. When language is paired with notes and lyrics a a bridge to the gap of linguistics is formed. Linguistics from a musical angle creates another definition of the meaning maker. More actors are present. Every role (from the producer to the singer to the guitarist) is given a new opportunity to create a different meaning and a different opportunity to express that meaning. 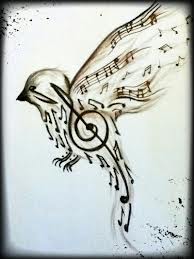