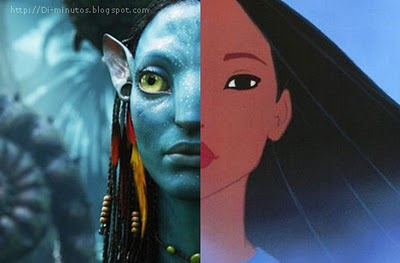 The legend of Pocahontas was constructed by Disney in 1995, creating the famous story of a young Powhatan woman who saves the life and falls in love with a European immigrant soldier. This myth seemingly enraged the native Powhatan people who find myth to be insulting to their history. The following text is taken from http://www.powhatan.org/pocc.html, a webpage created by the Powhatan people to preserve their history and debunk the Pocahontas myth:

“In 1995, Roy Disney decided to release an animated movie about a Powhatan woman known as “Pocahontas”. In answer to a complaint by the Powhatan Nation, he claims the film is “responsible, accurate, and respectful.” We of the Powhatan Nation disagree. The film distorts history beyond recognition. Our offers to assist Disney with cultural and historical accuracy were rejected. Our efforts urging him to reconsider his misguided mission were spurred. “Pocahontas” was a nickname, meaning “the naughty one” or “spoiled child”. Her real name was Matoaka. The legend is that she saved a heroic John Smith from being clubbed to death by her father in 1607 – she would have been about 10 or 11 at the time. The truth is that Smith’s fellow colonists described him as an abrasive, ambitious, self-promoting mercenary soldier. Of all of Powhatan’s children, only “Pocahontas” is known, primarily because she became the hero of Euro-Americans as the “good Indian”, one who saved the life of a white man. Not only is the “good Indian/bad Indian theme” inevitably given new life by Disney, but the history, as recorded by the English themselves, is badly falsified in the name of “entertainment. “

However, Pocahontus has already become a part of popular cultural and her story became an inspiration for other productions.  In 2009, world renowned director James Cameron produced a major blockbuster that became the highest grossing film of all time. (Wikipedia, Avatar 2009 Film). Cameron’s film, is extremely similar in storyline with Disney’s Pocahontas. The Huffington Post published a picture in its comedy section titled “ Avatar = Pocahontas in Space” critisizing the film’s storyboard and accusing it of being an exact copy of Pocahontas 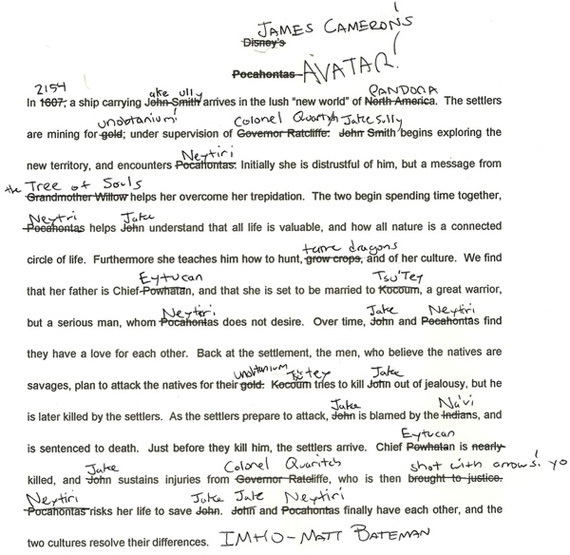 In this picture, the story of Pocahontas is written as text, and then names of characters, places, and other details specific to the Pocahontas film are crossed out and replaced with their counterparts from Avatar. This illustrates the high similarity between the two.

This clip points out similarities in scenes between Disney’s Pocahontas (1995) and James Cameron’s Avatar (2009).

The presence of striking similarities between those two films is apparent. Despite the large differences in production technologies, settings, and visuals, one cannot help but associate the two films with each other. Barthes mentions that texts, and particularly mythological ones, are continuously recycled to make use of already recognizable signs and significations, but within new context. Both films follow almost exactly the same story – an army arrives at a foreign land for the sake of obtaining its natural resources. One soldier forms a connection with the place and the natives, and eventually sides with them against his own people. John Smith/Jake Sully represent the same character, as do Pocahontas/Neyteri.

The ultimate purpose of this myth can be assumed to be creating a story with a moral; equality, love, valuing one’s land, and respecting nature. Barthes talks about mythology being a combination of  signifier and the signified. This purpose is communicated through signifiers – differences Each of those films uses different signifiers in a manner that is appropriate and in-line with current times and technologies. For example, Pandora, the foreign planet where Avatar takes place, signifies new beginnings and a new world, just like the new found land of America does in Pocahontas. The inhabitants of Pandora, The Navi, signify foreign and highly misunderstood people, just like the Red Indians once were.