It is because our brains, more than those of any other animal on the planet, are primed to seek and consummate such intimate relations with non-biological resources that we end up as bright and as capable of abstract thought as we are.

It is because we are natural-born cyborgs, forever ready to merge our mental activities with the operations of pen, paper, and electronics, that we are able to understand the world as we do.

The above quote by Andy Clark has never been so relevant as our technologies truly have become  an extension of ourselves  not only physically through our senses, but by holding our memories, thoughts and pieces of  our identity. The notion of “natural-born cyborgs” has never been so obvious than when one looks at the new Google Glass. The hype  buzzing around the internet and tech worlds describes the device as the next step in the fusion between the “real” world and the digital world, ultimately what many media reports are deeming a “true form” of augmented reality. However, upon further attempt to deblackbox this the Google Glass, it appears this technology is not as novel or innovative as many have made it out to be.

The medium of a wireless invisible interface is a hot topic among a number of technologies and based on the theories of communication and mediums McLuhan, is an evolution of the integration of human and technological integration. McLuhan expresses the need for us to look at “the function of technologies under the paradigm of extensions of man,” asking us to look past the image or item that is front of us, or in the case of Google Glass, on us. The medium of Google Glass is continuing our pattern of discarding the noise to create an experience that is harder than ever before for critics to define as solely digital as the digital has become the real and the real the digital. Taking a picture or recording video from a first person perspective prevents any division of what many think of as two separate worlds.

Furthermore, when you look at the history and development of the Google glass and similar technologies, the utopian/dystopian uproar among opposing sides seems like the typical old versus new arguments that are often found in evolving technologies. For example, before going to work   at Google Babak Amir Parviz wrote a paper, giving a greater deconstruction of the technology and its production called self-assembled crystalline semiconductor optoelectronics on glass and plastic.” Google Glass suddenly sounds a lot less exciting or innovative. The title within itself is a recognition that the technology should not be seen as a miraculous device by grounding it in scientific language that makes it seem simply as computerized eyewear. 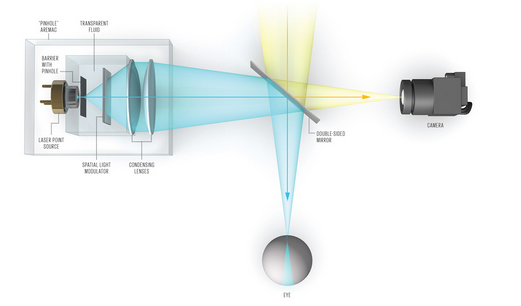 This image above taken from Steve Mann’s article “My Augmented Life” presents a deblackboxed diagram of how Google Glass works with basic knowledge of light refraction and computer science. The social impact and narrative that Google has created with their commercials is a way that the human symbolic faculty gives new technologies meaning.

Also of interest is the idea of surveillance and the meaning that many critics have ascribed to Google glass as an invasion of privacy and step to far from Google. However this “invasion of privacy” that people claim Google Glass will perpetuate is already happening. Many of us are aware that Google and Facebook collect data on us and many of us complain, but just the same, many of us now recognize it as a necessary evil to make our lives easier and to continue to use the technologies and web services we want. While there are several arguments between the notion of utopian versus dystopian uses, the blog site “The State” says it well:

This data is already out there, being collected daily. It will not spontaneously arrive with Google Glass, nor is it limited to the massive data combine that is Google itself. Each and every one of us has already given up more data than a bus full of Google Glass wearers could collect. -Adam Rothstein, www. thestate.aw

Our life is now lived through data and as Clark proposes a number of times throughout his writings, is a extension of the human cognitive process the same way in which we now use our computers and smartphones as a part of our identity, and the ways in which people used to rely on pen and paper to express themselves and their identity in the world through letters, diaries and stories.