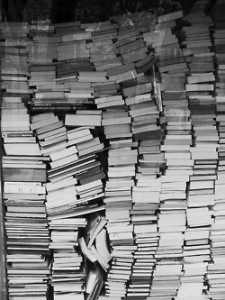 The purpose of the book has always been the same: to read and become absorbed in a series of text and/or pictures. Just like the MP3 came along as a “new” and “revolutionary” technology in the popular culture sphere, e-books and e-readers are often donned with the same terms. But what makes them new or revolutionary? Is describing e-books as a technology even sufficient? Not entirely, if you analyze the e-book and related items such as digital ink, e-paper and thin film substrates from a theoretical, post-modernism, and digital media background. As Sterne said:

Analysis of the Technology Functions:

Saying the e-book is a technology is simply not enough. It is a system of technical functions that aim to please the end-users, which is simply allowing them to read the text.  The most ostensible variations in the technology systems of a traditional book and an e-book is the format. Although Sterne talks in-depth about the format of an MP3, his analogies can apply to the book as well. According to Sterne, “format denotes a whole range of decisions that affect the look, feel, experience, and workings of a medium. It also names a set of rules according to which a technology can operate.” (2012, p. 7).

The format of the traditional non-digital book (no presence of digital ink, or electronic apparatus) involves the physical quality of paper itself, the binding, and the option of a hardcover or paperback. This traditional technology provides the user with an experience of touch and an individualized  memory function (one can fold the pages as an impromptu bookmark or one can use the index in the back of the book). For the e-book, its format allows the user to still hold the device the same way a traditional book would be held, but feels different (a smooth exterior, sans paper) and a built-in memory function for jumping to pages or using the index. There may even be a highlighting option, meant to replicate the function of highlighting text a reader would do with a physical writing utensil.

Analysis of the Mediations Functions:

No matter the format, the book transmits meaning through its mediation function. Just like Apple did not “invent” the MP3, Amazon nor other e-book manufacturers did not “re-create” the purpose of the book. The fundamental function (to read) is still here. The Kindle, Nook and other e-readers’ main function is to provide avid readers with new options, as we are in an increasingly growing convenience-based society.

Like the MP3, e-readers have the affordance of taking up less physical space. Ten physical books require more effort to carry than 10 books uploaded to an e-reader. To touch upon Manovich’s ideas, what really makes the e-book an e-book is its employment of software. Here, the software is working 24/7, whereas for the traditional book, the software was only used to produce. The e-book’s software must constantly be running to work for the user and be stored in compatible file formats. Nevertheless, e-books and traditional paper-based books still require information processing from the human  – e-books are intended to mediate the author’s messages, thoughts, and analyses in the same way a book would 20 years ago.

Analysis of the Interface Functions:

The e-book is no panacea for traditional reading issues. For example, if you’re reading a physical book in a crowded place and reading an e-book in a crowded space the reader may still grapple with outside noises and distractions. One would still be in dismay say, if he or she accidentally dropped her book or e-reader in a river. Granted, the monetary value of an e-book’s interface is probably more than a regular book. The value of the interface is still inherent, but it’s the way the book’s properties are presented that function differently.

The book is a cultural artifact whether or not it is in the form of an e-reader or it is a 50-year old paperback with a withering cover. In the near future we will see more presence of bendable screens, e-readers with greater capacities and digital ink becoming as relevant as the 2000-year tradition of paper-based books.