In the winter of 2011, I set up a Chinese “Tumblr” page called New Media Ourselves to Death. (http://zhan.renren.com/communications) Instead of making a tribute to the famous book Amusing Ourselves to Death, I wanted to emphasize the power of new media at the time that how it grew a rush life. I was fascinated by this revolutionary power and couldn’t help imaging how it had changed and would continuously change everything. Apple devices and social networking sites have saved our time and wasted our time simultaneously, and we always enjoy them. I like Manovich’s database theory, as new media presents a world of database: new media forms are such compatible and inclusive that all the videos, texts, images are archived as files on personal computers and are organized yet fragmented. “The database presents the world as a list of items, and it refuses to order its list.” (Manovich, Language of New Media, 41) I’d say my current desktop is a good example: I’m doing multiple things simultaneously on one platform/interface, but by opening all the windows, web pages and software, I’ve interacted with different interfaces and am able to construct my own desktop database.

Right in the place we take this course – CCT studio, I noticed an old yet potentially evolutionary device is silently standing at the back of the room, which was designed as “Microsoft Surface” in its time (2004). It was perhaps the earliest tablet ever and the ancestor of the current Microsoft Surface, iPad & Nexus X. This device looks like a heavy metal desk with electronic glass screen on its surface, and there are complicated wire cable and circuit board inside the desk a black-box alike body. The screen allows both direct multi-touch and mouse control through a computer. What’s even more amazing is that this device is installed with software and applications for gaming and working. In short, it’s a desktop sized Microsoft surface. The circuit board inside is an interface providing the networks for wires and technological components to connect each other, which generates the machine – machine interaction; the glass screen is an interface for users to directly “talk” with the machine, which involves human-technology interaction; the software in the device can be viewed as interface as well, since it enables the user to enjoy the process of playing games: the action itself is the transmission of design, code, and ideas. Although not telling a story, this device is such a collection of items that each of them has the same significance as the other, creating an integration of different levels of interface. 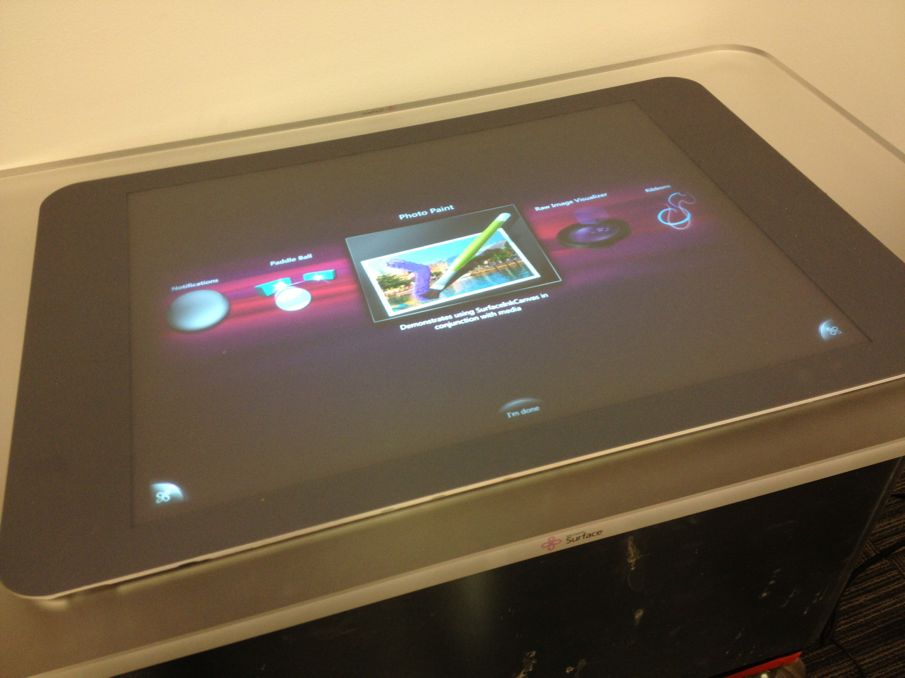 Standing in front of the precursory tablet, I felt so excited that I was even picturing what the future of desk would look like: a neat, large, plain desk with nothing on it. By touching any point, the desk surface may transform to any media forms we want, a large piece of paper, a pc/mac system desktop, a social networking site platform, a digital piano, or simply a piece of solid wood. It obeys all the five characteristics concluded by Manovich: Numerical Representation- digital, numbers, work with sound and image in one platform; modularity – we change any form/page but won’t change the structure (the desk itself); automation – the ability to accomplish the task is automated; variability – variability and multiformity during the media convergence process; transcoding – data can be read in many different ways. Most importantly, the future desk has already existed, conveying an idea of the abundance of today’s new media.

In my “New Media Ourselves To Death” page, I posted Steve Jobs’ classic lines when introducing the first generation iPhone at the launch in San Francisco on January 2007:

“Today, we’re introducing three revolutionary products of this class. The first one is a widescreen iPod with touch controls. The second is a revolutionary mobile phone. And the third is a breakthrough Internet communications device. An iPod, a phone, and an Internet communications device. Are you getting it? These are not three separate devices, this is one device, and we are calling it iPhone.”

Lev Manovich, The Language of New Media (excerpts). Cambridge: MIT Press, 2001.
A very influential book in the field. Read selections from chap. 1 (What is New Media) and chap. 2 (“The Interface”)