Manovich, the iPhone, and Pictures Under Glass

Manovich re-energizes the concept of “new media” by attempting to narrow down the specifics of this umbrella term. He explores a variety of components that make up “new media,” including its variability, transcoding processes, and interactivity. Manovich also posits that many of the innovative aspects of “new media” rely on older forms of media. Similarly, Bolter and Grusin emphasize that mediation and remediation are inseparable. I will use the iPhone as an example in order to determine whether or not these definitions are applicable to modern day media platforms.

The Apple iPhone is a “new media” technology that has become an incredibly popular entertainment, communication, and computing device. There are a few key components of the iPhone’s design that highlight the way “new media” forms are presented and consumed by the general public. Its presentation as a desirable product is communicated through advertising, and Apple ran a very successful campaign. Manovich discussed marketing in The Language of New Media (Manovich 60). Instead of targeting mass audiences, companies like Apple have been emphasizing the individual. Advertisements for the iPhone highlight features like Siri in order to present the iPhone as customizable and attuned to personal needs. However, the user experience is also presented as simple and direct. Bolter and Grusin point out that there is a noticeable effort to erase the user’s awareness of the medium. The interface of the iPhone, therefore, should be intuitive to the user.

Here are a couple of diagrams I found through Google Image Search of the components of an iPhone: 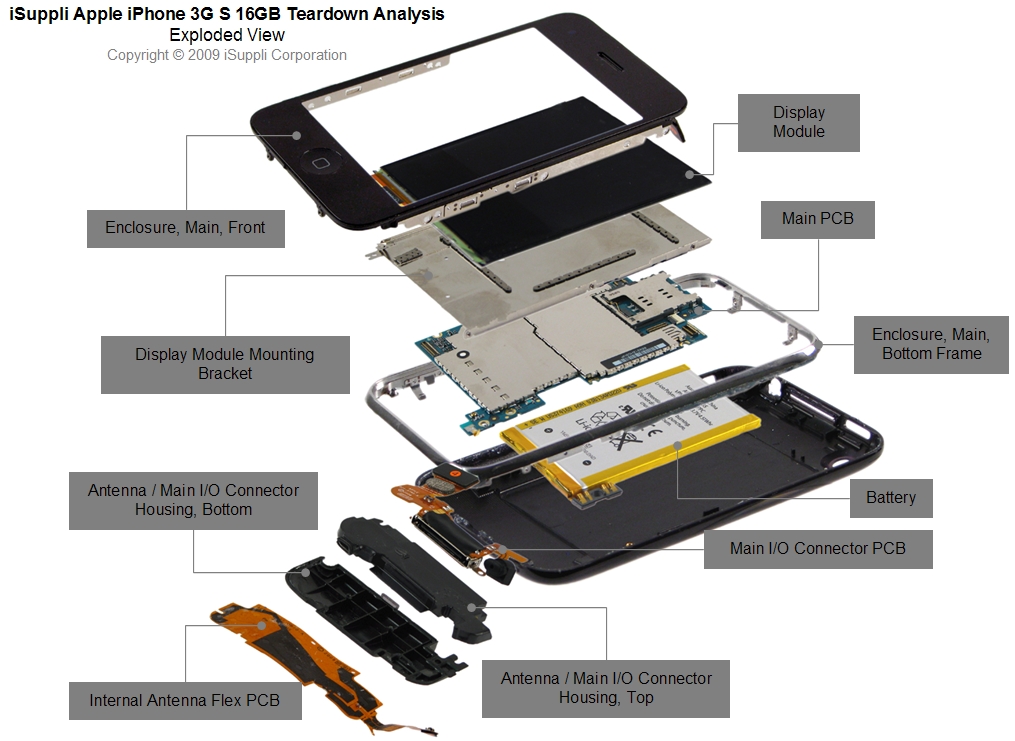 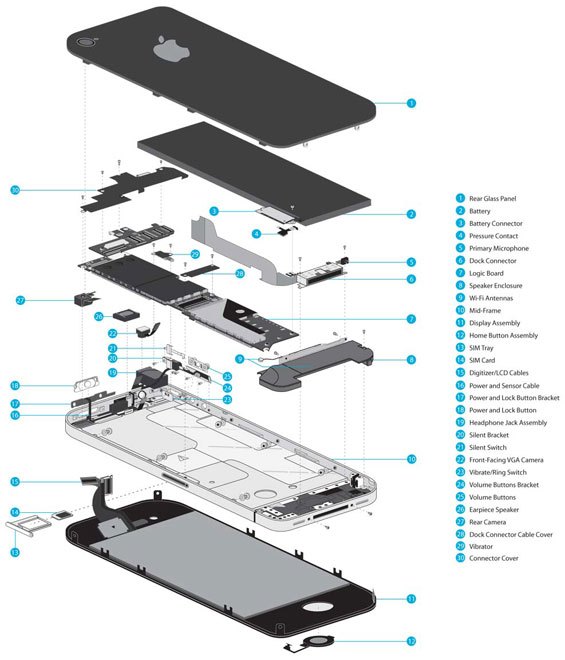 Manovich explained that “new media” objects such as the iPhone are composed of digital code, automation, and other number-based elements (Manovich 48). However, these are not the parts of “new media” that users directly interact with. Manovich posited that the role of software in the structure of “new media” is much more important than many of us may realize. He argues that “While digital representation makes possible for computers to work with images, text, sounds and other media types in principle, it is the software that determines what we can do with them (Manovich 3).”

Manovich’s concept that “There is Only Software (Manovich 4)” may be applicable to the iPhone’s software components. The software for the iPhone is generally referred to as apps, or applications. Users do not work with the numerical representations of the iPhone’s functions. Instead, they use the software as translations of these hidden processes. Consequently, users forget about the invisible technical details of the technology. As Manovich writes, “media becomes software (Manovich 12).”

The implementation of software and apps on the iPhone is not particularly innovative. Software has been used as a method of communicating with hardware since the early days of PC computing. Manovich, Bolton, and Grusin all discussed this process of building on old forms of media in order to produce the “new media” that we interact with on a daily basis. “New media” technologies such as the iPhone possess the combination of a variety of familiar media platforms, cultural semiotic codes, and other primary building blocks. The iPhone, for example, contains numerous instances of this remediation. The camera and its application borrows from photographic tools and digital photography. iMessage seems loosely based on many instant messaging programs. The phone component displays functions of a cell phone, PDA contact list, and voicemail machine. Additionally, Apple includes its iPod capabilities with the iPhone’s music software. All of these components derive from earlier versions of media. They are combined and reformatted in a remediation process that forms the newest meta-media: the iPhone.

Manovich discussed HCI in his writing, and used the game Myst as an example of “new media” that made use of cinematic techniques as part of its interface (Manovich 81). The touchscreen seems to be the most prominent method of interaction between user and iPhone. A couple of years ago I read a blog post by Bret Victor about touchscreen technology. The post was titled “A Brief Rant on the Future of Interaction Design,” and made the argument that touchscreen technology such as the one implemented through the iPhone does not successfully utilize all of the capabilities of the human hand. He calls the touchscreen “Pictures Under Glass,” and posits that “Pictures Under Glass sacrifice all the tactile richness of working with our hands, offering instead a hokey visual facade.” This discussion of human capability and user interaction reminds me of the importance of cognitive science within the realm of “new media.” Victor seems to believe that the touchscreen of an iPhone numbs the senses in a human limb that has historically been used to manipulate tools in a tactile manner. How are our cognitive processes affected by this apparent repression? Victor also posits that Pictures Under Glass is a “transitional technology.” He pleads with researchers to look into the development of technologies that work with more intuitive gestures and hand motions rather than simple slide-across-the-screen movement. The touchscreen technology may not possess the same familiarity as the cinematic techniques used in Myst. Its history of remediation may not stretch back very far, and Victor makes the claim that the interactivity required by a touchscreen does not take advantage of the full range of cognitive and physical processes displayed by humans.