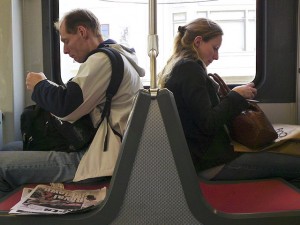 Yesterday I was sitting on the bus, and as usual, everyone was on his or her iPhone playing around, waiting until they got home. I could see multiple screens from my seat and it was clear that everyone was doing something differently with the same machine: one person was reading a book on their phone, another playing a game, someone was writing a list, one person was flipping through instagram, and there I sat, sifting through my Spotify.

We talk about the iOS and iPhones a lot in CCT – I know we did when I took 506 – but it’s such a good example of what’s possible with interface. Apple knows what’s up when it comes to designing easy-to-use machines. And this interface allows for all different types of software (within the Apple circle of trust, of course, but that’s a whole other political issue), basically allowing it’s user a huge range of, but not infinite, amount of activities. When Manovich talked in “Language of the New Media” about how new technology puts more responsibility into the user’s hands, it reminded me of my iPhone, but also basically everything I do online. In talking about variability, Manovich explained how our interfaces now correspond with modern society where every person is unique and so is her experience. Instead of offering one path to do things, now we get customized information delivered to us through our devices. A sort of choose your own ending type of approach, where an user can meander online and find one piece of information in a certain way that maybe nobody else ever will.

Manovich put it this way: “More generally, every hypertext reader gets her own version of the complete text by selecting a particular path through it. Similarly, every user of an interactive installation gets her own version of the work. And so on. In this way new media technology acts as the most perfect realization of the utopia of an ideal society composed from unique individuals. New media objects assure users that their choices — and therefore, their underlying thoughts and desires — are unique, rather than pre-programmed and shared with others.”

He goes on to ask if we should want that kind of freedom. And this is something that I’ve struggled with and that friends of mine who aren’t so into jumping on every new technology also ask. With that freedom comes a lot of choice and a lot of noise. Manovich talks about putting the decision making as a moral issue. I think I could agree with that, but almost in a different way. If technology has evolved to deliver media to us in a way that caters to our interest, is that what we really need? The readings mentioned how technology has been shaped by culture, and vice versa, which sort of implies that we’re getting what we want from our devices. We’re utilizing our interfaces and software to take over certain tasks like communication, research, and news gathering.

But back to the bus. In thinking about McLuhan’s idea of the medium being message, that day with everyone’s cell phone blazing kind of sent its own message about society. While everyone was flipping through their iPhone interface, it seemed like the message was almost more about distraction than any sort of meaningful content. (It feels weird to say this because I really love my phone, and I’m constantly on it.) And maybe that’s just a product of the environment; on a commute, polite societal rules go out the window. But watching everyone flip through their phones, myself included, doing completely different tasks at the same time, we all looked the same. And we all kept flipping. What does that mean? Foulger’s idea of the medium being part of the message also intrigued me in the example of the guy reading a book on his phone. Does reading a long-form book on that kind of device or interface impart a different message than a physical book or even a bigger device like a Kindle?