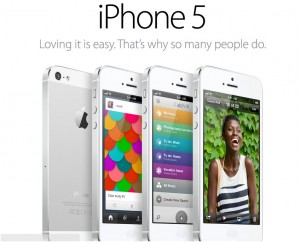 Apple claims that loving “it” is easy and great. But what’s “it” exactly – not just the phone, but the old, new, and digital media functions that come along with it.

I entered the iPhone world quite recently, this past January. Up until then I wasn’t necessarily opposed to the iPhone but found more cost-efficient cell phone options. After figuring out how to make my cell phone plan work with a gently used iPhone 4 given to me from a friend, I figured I’d give the iPhone a shot and see what all the hype is about.

Tying in this week’s readings with real-world experiences helped to conceptualize how frequently we try to categorize PCs, iDevices and tablets into one or two rigid categories. Take the ubiquitous iPhone for example – it is a phone, it is a digital content maker, a depository of media artefacts, and a medium for digital and new media. I found that Manovich’s argument of the computer can be applied to the iPhone:

“No longer just a calculator, a control mechanism or a communication device, a computer becomes a media processor.” (Manovich, 2001, p.48)

This statement by Manovich shows how the initially, people viewed computers as a single-tiered operation tool. Now the computer has evolved into a robust processor of information, communication and media. Like the computer, the iPhone is not just a passive device to make and receive phone calls. It is a processor of media – the iPhone mediates verbal communication (via SMS and MMS), it has its own port of entry into the Internet, it can capture photos in a digital format which can be shared between other phones. Of course, the iPhone does much more than this, but I think it is useful to use it as media processor, just as a regular computer is.

Furthermore, when we consider the media functions of a specific device the “invisibleness” of it often gets overlooked. As Manovich (2012) stated in Media After Software, “The new ways of  media access, distribution, analysis, generation and manipulation all come  from software” (p.2). The software within the iPhone is mostly invisible because it is not the first part you notice about the device. The interface (the screen, buttons, total physical entity) gets noticed first, followed by the ‘regular’ media component such as telephone options and Internet capabilities. But its software and the constant updates that make the iPhone do all the “cool” digital and new media functions they cannot happen on their own.

Lastly, I found Bolter & Grusin’s (2000) take on immediacy relevant to the topic of the iPhone and the convergence of mediated systems. Their example of the 1996 presidential election being the first one covered on the Net was interesting because now it is hard to picture an election without it being mediated through various communication channels. The iPhone serves as a platform for mediated communications and new media (defined as cultural objects which distribute and exhibit by Manovich).

My takeaway is that we cannot take our devices for face value and should dig past the shiny interface of a screen to ask “what does this device do for me?” and “How is new media being implemented here?” Questions regarding the evolution of devices should also be asked – do they truly extend our cultural memories? Or do such devices fragment our cultural memory into invisible pieces across the digital and non-digital platform?