Transmission and the social, political and cultural embeddedness of media is evident in our constant need to connect instantaneously and formation of an online presence. Twitter is an interesting example of a media form that has been shaped through past and present institutional standards. For example, the 140 character limit of Twitter and it’s transmission of short messages heralds back to the days of the telegraph when the messages were concise and to the point, and for the time period transcended the notions of time and space. Twitter and other social media outlets present us with a live feed of what is going on in the world and is obviously shaped by different social and cultural agencies than its predecessor. The mediology of Twitter needs to be analyzed in its usage of real-time communication, the position of the users, communicators and interpreters, and the effect of Twitter’s institutional background in context of ideologies, memory, traditions and values.

March marks the 7th year anniversary of Twitter’s launch in 2006 during SXSW Interactive in Austin, TX . Below are several quick facts of Twitter’s development over the past several years. 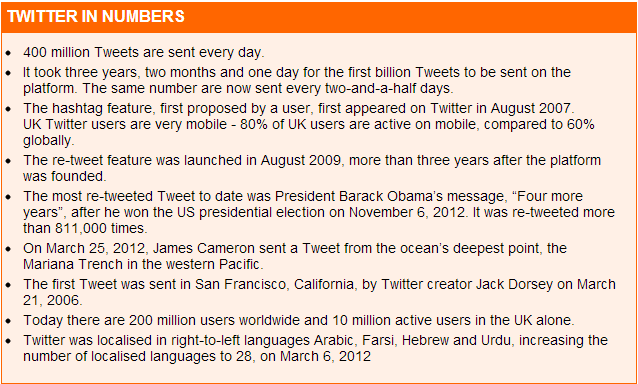 The numbers above shows the combination of transmission and cultural of this media format as both a proliferation of institutions while also displaying Twitter’s power as an institution. The number of uses and tweets sent everyday is an indication of our need to communicate and have our voices heard. The use of tweets by politicians as Barack Obama, who currently holds the record for the most retweets, indicates the utilization of social media within the institution of government. It is not Twitter or smartphones that are simply giving the messages agency, it is the people and organizations within our societal structures that give it power.

The bottom-up model that Twitter enables and its model geared toward smartphone usage, puts in Twitter in a different mediological context than other social media outlets like Facebook. The real-time transmission of 140 character messages, the kind of brevity used in other institutions like businesses, politicians, activists and so forth to create a succinct marketing/branding message, has created a new type of platform. Without the focus on the personal and friends list that Facebook promotes, Twitter as an institution has become a transmission of ideas, news and opinion from an array of people from celebrities, journalists, political figures, artists, businesses, activists and even the Pope.

The idea of the Pope on Twitter, while at first seeming quite bizarre, is perpetuated not just by the popularity of Twitter as media and technology, but reaches back in our human history and culture of meaning-making in which we evolve to reach out, send our message to have others interpret it just as people did with the invention TV, newspapers, telephones, telegraphs, letter delivery systems, messengers and etc.

Another example of mediology within the twittersphere is usage of the platform for research, public opinion and free speech within society. It also raises the question of privacy within our institutions like many technologies these days. The link below shows an interactive location-based map from USA Today of tweets about the Supreme Court hearing on gay marriage based on GPS location systems and hashtags. The tweets represent people on both sides of the ruling and again attests the real-time communication factors, citizen involvement and now the political and social connotations involved within the Twitter world and all of its components such as access to the website, use of smartphones and political and cultural ideologies in an increasingly shrinking network of discourse.