Earlier in the semester, I analyzed Shannon’s and Foulger’s models of communication through the lens of fandom interaction. These models come into play again through the study of mediology. Shannon’s model of communication has divorced the communicative process from cultural, political, economic, semiotic, and any other processes that it may be intertwined with. Shannon’s and Foulger’s models seem to imply that there is a cause and effect process involved in studying media. Mediology, on the other hand, posits that culture and technology are so intertwined that they should not be studied separately.

Instead of concentrating on one single interaction between creator and consumer on Twitter, it may be more effective to analyze a broader form of media. In terms of fandom, nothing is bigger or broader than the annual San Diego International Comic-Con. Hundreds of thousands of people flock to California every summer to attend this massive media event. How can Comic-Con be analyzed through mediology? How does this analysis compare to that of Shannon’s and/or Foulger’s models? 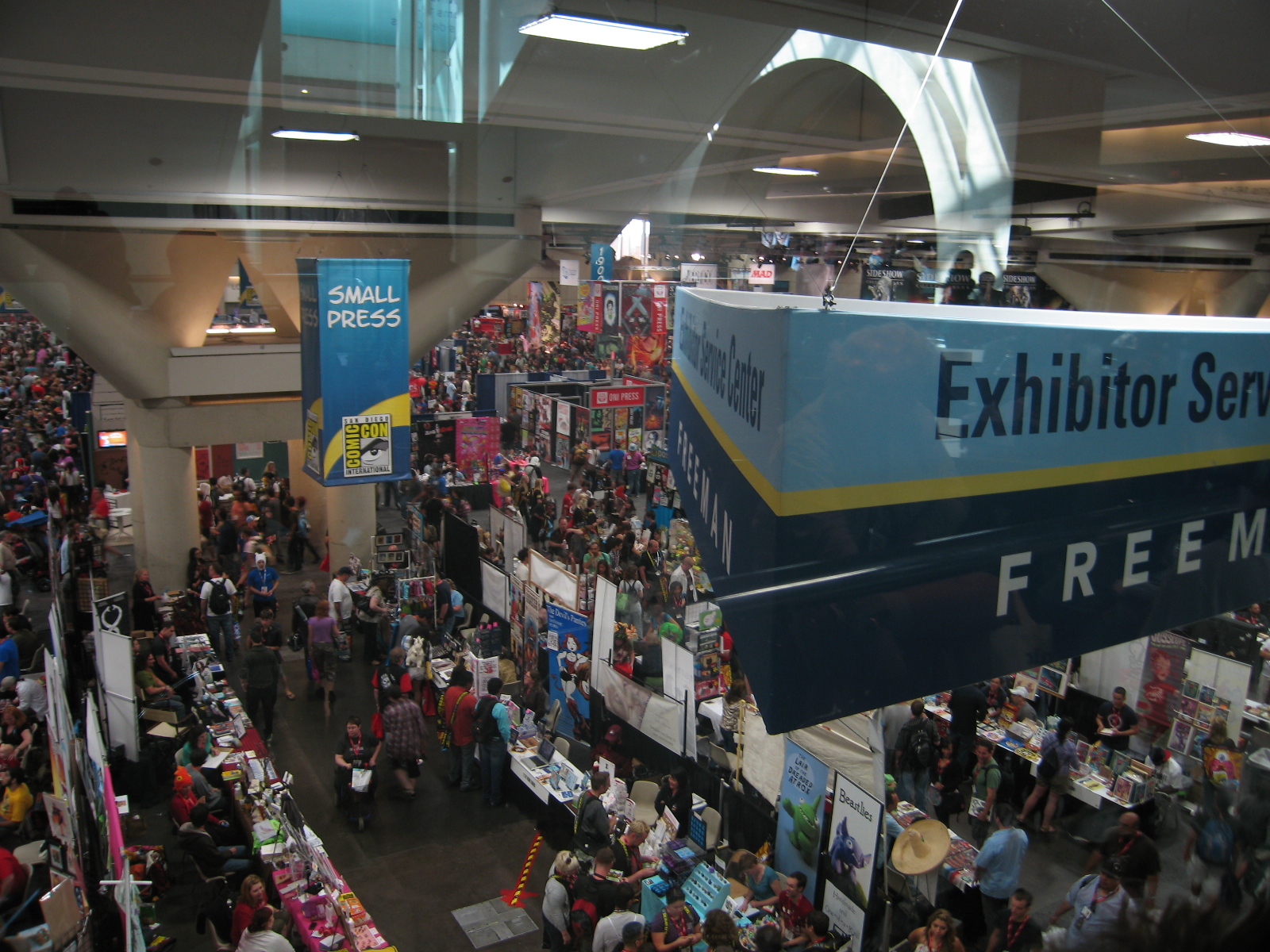 Other comic conventions such as Emerald City Comicon, Angoulême International Comics Festival, and New York’s MoCCA Festival are focused on the singular medium of comics and cartoon art. San Diego Comic-Con, however, is combinatorial on multiple levels. The physical space of the arena is transformed into hundreds of booths that are categorized by medium. There are comics dealers, t-shirt vendors, independent and small press comics, video game companies, television and movie studios, toy collectibles, and the list goes on. Guests and exhibitors communicate through a variety of mediums as well. There is person-to-person contact, but there are also free giveaways and game demonstrations. Shannon’s and Foulger’s models are present when a comic artist signs an autograph, or when a guest tweets to a friend across the room about a free poster she or he just snagged from a vendor. However, those models do not allow for the scope and underlying conditions of Comic-Con. In addition to the media forms present in the exhibition hall, there are also panels and events throughout the weekend. Panels take place in large rooms in which there are interviews, sneak previews for shows and movies, podcasts, workshops, etc. Outside of the convention center, San Diego embraces fan culture by incorporating Comic-Con events. Restaurants are taken over by TV shows, there are a number of parties at any given location throughout the city, and hotels employ shuttles that carry guests to and from the convention center. Comic-Con exists within virtual media forms as well. Twitter is overrun by attendees spilling news and jealous non-attendees discussing the panels as they happen. Attendees may also post pictures, videos, and blog posts within the context of the convention. Shannon’s and Foulger’s models seem too narrow to accommodate such a large-scale media event. 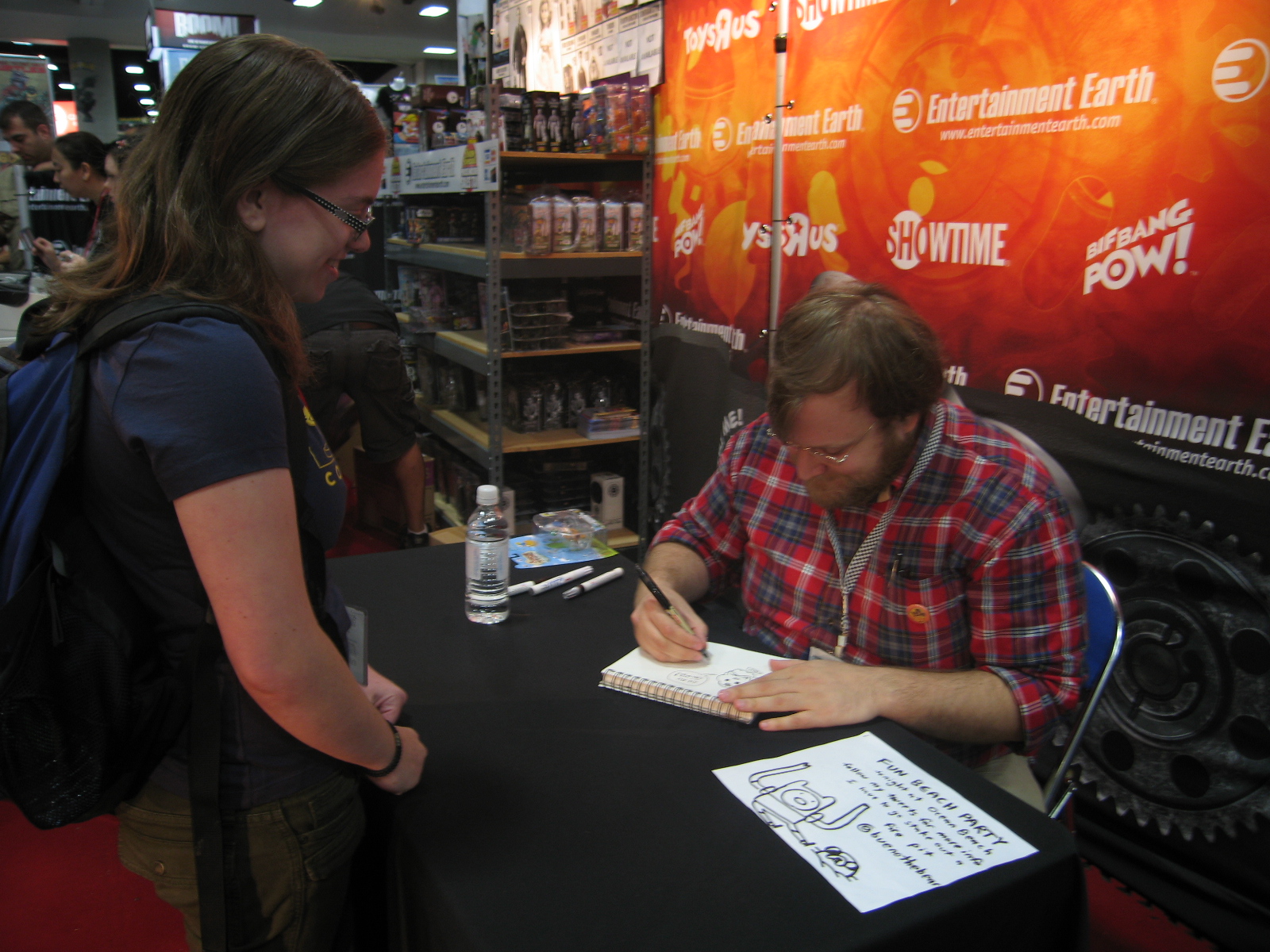 Image: An excited fan asks for an autograph from Pen Ward, the creator of Cartoon Network’s Adventure Time.

Debray explained in Media Manifestos that he is “interested in the power of signs (Debray 6)” rather than their meanings. Comic-Con seems to harness that power in order to produce both monetary and cultural value.

The most harrowing experiences occur before the convention actually takes place. I am referring to ticket purchasing and hotel reservations. Tickets officially go on sale during the previous year’s convention. Later on, the remaining tickets are sold online but disappear within hours. Hotels are similarly booked up months beforehand. There are several economic underpinnings to this interaction. Comic-Con is not cheap, and so the buyer must have the economic means to purchase a ticket. Sociologically speaking, the average Comic-Con attendee may be of a certain class that can afford the expenses. Then there is the matter of navigating the ticket website, which may or may not be designed to help or hinder the potential attendee. Other economic factors involved in guest attendance include the sales of airline tickets, hotel bookings, restaurant reservations, car rentals, and many other industries that are able to feed off of the mania surrounding the convention.

The cultural forces and conditions involved in Comic-Con are similarly expansive, and are nearly inseparable from economic forces. Large media companies attend in order to build up a fanbase before releasing content. Small independent distributors and artists attend in order to sell their work or look for work. Many guests attend in order to purchase comics, artwork, figurines, and other items. However, there are other conditions of Comic-Con that are not as deeply enmeshed in profit margins. As I mentioned earlier, fanbases are created at Comic-Con to help a new television show or film gain support before its release date. The creation of a fanbase over the course of a weekend is a remarkable feat, and could not be accomplished without the involvement of celebrities, branding, social media, and well-constructed preview material. This process is the formation of fan culture within a contained space. Additionally, other fandoms come to Comic-Con in order to reinforce their loyalty and camaraderie. 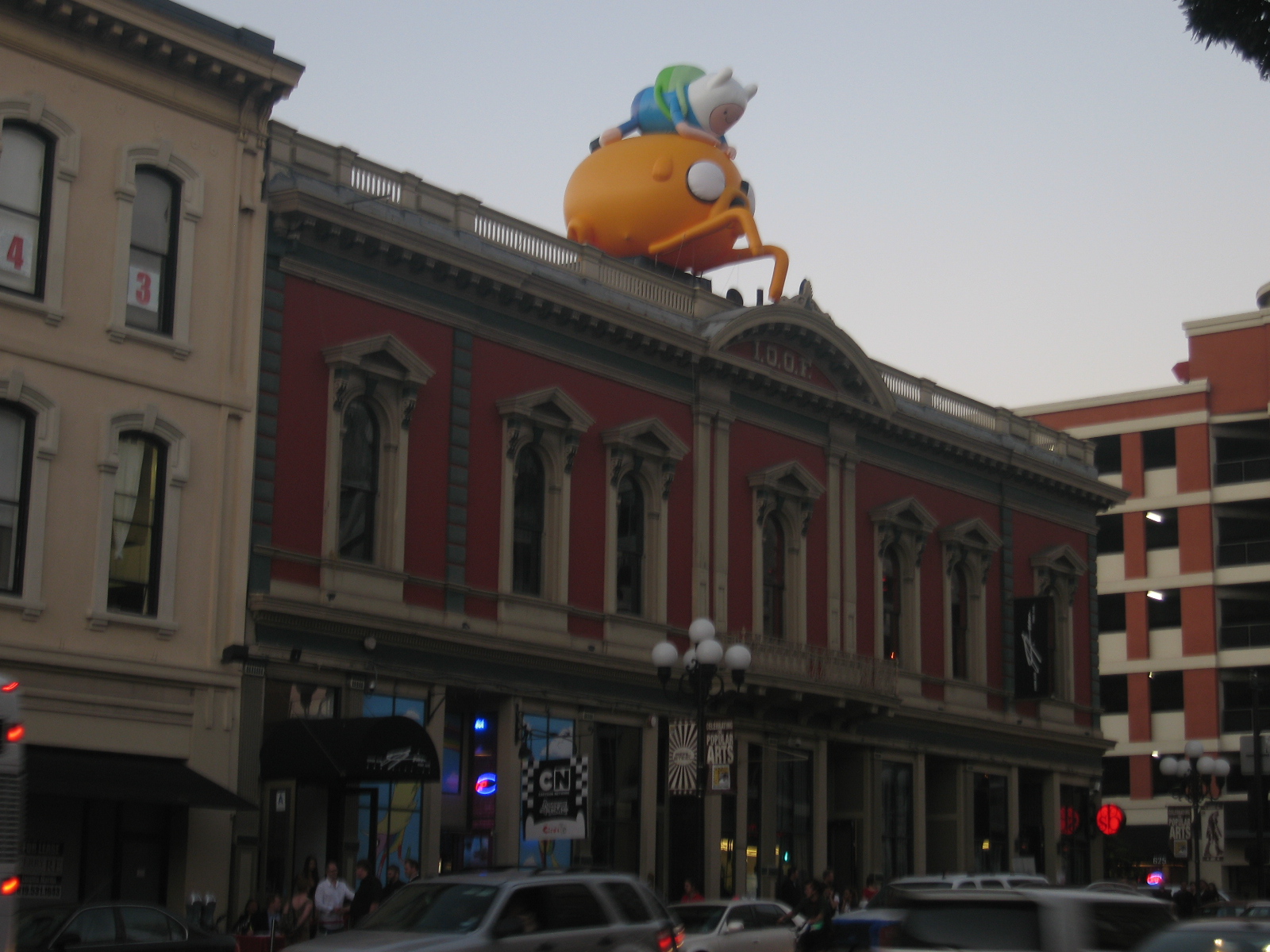 Image: Cartoon Network takes over a restaurant for Comic-Con weekend.

Steven Maras writes that “Debray casts doubts on a complete separation” between communication and transmission (Maras “On Transmission”). Further analysis of Comic-Con may support the idea that these concepts are folded within each other. The communication process of pop culture seems to overlap with the reification of pop culture over time. Pop culture manifests within many institutions and mediums (there may be some parallels to organized religion in that regard), but all of these converge onto San Diego each summer. Comic-Con has become synonymous and symbolic of the umbrella term “pop culture.” The convention’s semiotic power is rooted in its communicative and transmission processes. 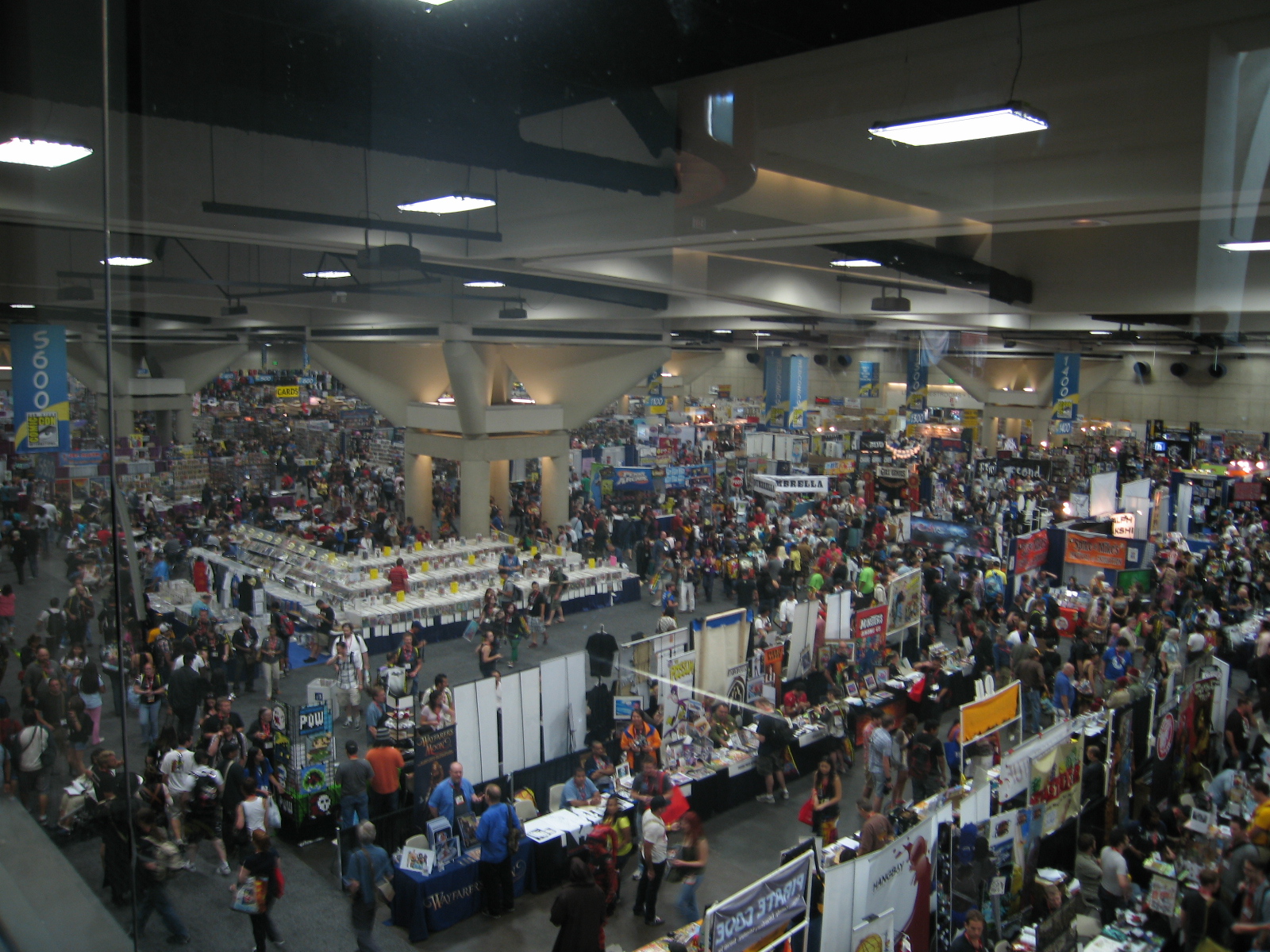 Is Comic-Con a Black Box of Pop Culture?

Comic-Con may function similarly to a black box metaphor for someone who is unfortunately unable to attend. Guests enter the convention doors, and a cacophony of news and hype pour out into the virtual world. New films and shows are either lauded as the next hot cultural phenomenon, or they are declared dead upon arrival. Celebrities make surprise appearances, and some clips may make the rounds within a few minutes of their appearance. Mainstream comic book characters are introduced or killed off within the course of a panel. All of this occurs in one place and over the course of one weekend. Even the attendees may not be aware of how news spreads of a free giveaway or disappointing panel. It seems as though the process of producing culture through Comic-Con is not clear. Non-attendees soak up the information and react to bad news accordingly. Attendees rush through the crowded hall without much knowledge of the convention’s inner workings. A more specific example of this potential black box occurred in 2009. A new film debuted at Comic-Con called Scott Pilgrim vs. the World. The film was based on a series of fairly popular comic books, and it was a rousing success at Comic-Con. Rave reviews came in from those who saw it at the convention that weekend, and Comic-Con’s adoration of the movie seemed to be a good omen for its success. Unfortunately, Scott Pilgrim did very poorly in the box office and is now generally considered to be a cult film. Comic-Con’s failure in this case reveals the mysterious nature of its underlying processes. So many different forms of media make up the input and output of the convention that it may be difficult to pinpoint what exactly goes on over the course of that weekend.

Salkowitz, Rob. Comic-con and the Business of Pop Culture: What the World’s Wildest Trade Show Can Tell Us about the Future of Entertainment. New York: McGraw-Hill, 2012. Print.