“I hate your big dumb combat boots and the way you read my mind.
I hate you so much it makes me sick — It even makes me rhyme.
……
I hate it when you’re not around and the fact that you didn’t call.
But mostly I hate the way I don’t hate you — Not even close, not even a little bit, not even at all.”
— Film line from 10 Things I Hate About You

The film line above only serves as an interesting citation and is related to my emotion for Facebook/Renren. When speaking of Facebook, I’m mainly talking about either Facebook or a Chinese version – Renren, which I browse once in a while everyday. I’ve written about Facebook like ten times in my past papers/thesis, but this leading metaphor of what we call the “social network” has occupied such a great deal in our daily life: our time, our mind, our capability to communicate, but has never relieved our loneliness. To follow Debray’s theory, I hope to once again analyze Facebook – its “higher social functions” in its relationship with the means and mediums of transmission. This is pretty much like our first mini-project on 506: unpacking a technology/ de-blackbox. Even the most mundane technologies that we take for granted may become the butterfly wings.

The online self-exposures and privacy threats did not start from Facebook, but it indeed is the pioneer of the real-name social networking sites. In Myspace, we at most stay behind the computer and convey our insights and set free our interests on music, movie and trivial matters. We are surrounded by the consistent surveillance and captured all the time. In the textbox question “what’s on your mind”, the words we type do not often truly represent ourselves, but the me-self, the unreal image we manage to create on the public sphere.

In an early book describing the definitive history of Facebook, The Accidental Billionaires: The Founding of Facebook: A Tale of Sex, Money, Genius and Betrayal, it introduced how Mark Zuckerberg created the basic frame of Facebook by using the color blue, which in the eye of a hacker/engineer is probably neat and elegant. The design of the site’s structure has slightly changed over time, but the main functions and the color blue stays, which lead an inherent logic that may kill creativity and artistic expression when we frequently use the site or design a similar site. 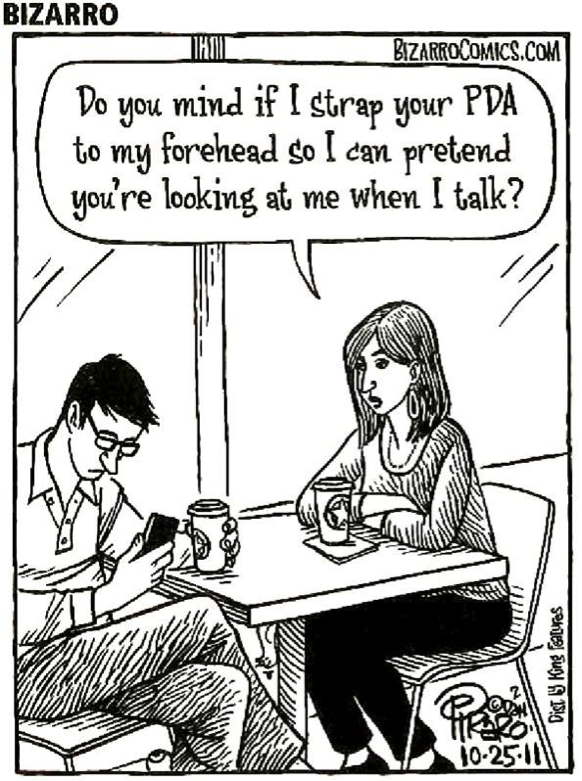 Admittedly, a new media platform such as a social network site or a smart phone seems to create a “smart world” for us, which gives us a sense that this is normal and necessary. However, this necessity appears to be ridiculous when people gather at a dinner table absorbed in their cellphones instead of talking to each other. There’s a joke concerning this point, “The furthest distance in the world is not between life and death, but you are texting messages when I stand in front of you.” If the communication services of new media platforms have in turn impeded our face-to-face interaction, what’s the meaning of a “contact book of faces” then? In Shurry Turkle’s book Alone Together, she summarizes this situation as “alone together”, that “we expect more from technology and less from each other.”

A typical Facebook syndrome is that you constantly check how many people like your posts, spend a long time on Facebook but find yourself less productive in your work or studies, and use Facebook as an escape for relaxation and pleasure. To be frank, I have all these “Facebook addiction” signs above. Although I cannot find an effective solution to get rid of the syndrome, but the truth is: the richer my real life is, the less will I focus on the virtual life. 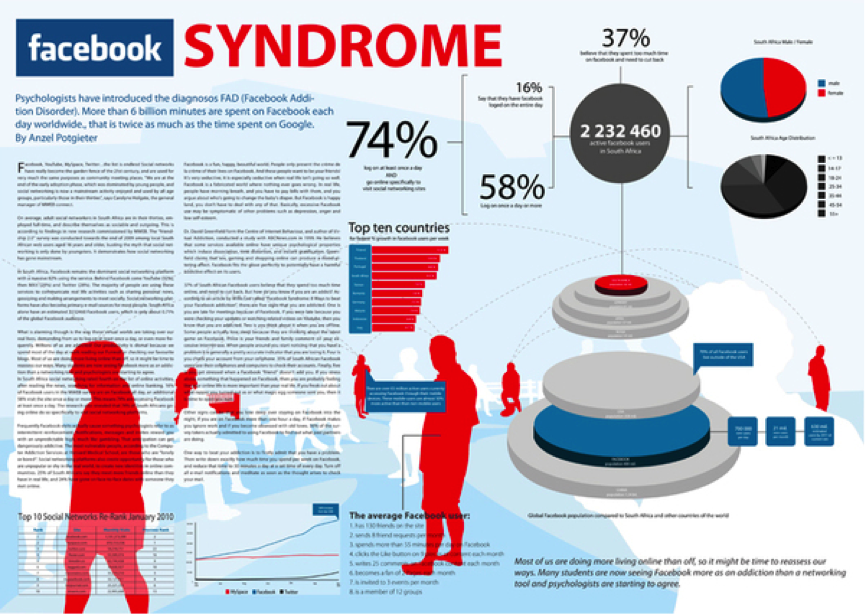 Since the Facebook platform is not a piece of hardware, I’m unable to unpack it by its material components but put more emphasis on the theoretical, spiritual level. Certainly, it also requires the real world relationship and interpersonal communication, the support of Internet, and the website design programs to make it work. I just named a few, which mostly concerns with Facebook’s effects on human mind, and the number 10 is an analogy to describe these “a few”. Daniel Chandler made a good point in his piece: “The significance of media transformations to those involved depends on resonances deriving from the nature and use of a medium rather than from explicit ‘messages’. ” (Chandler,1995) Should there be a McLuhan in the digital Era, I very much look forward.

Working With Mediology: From Theory and Hypotheses to Analytical Method. Martin Irvine https://docs.google.com/document/d/1_uEIJ5I4Sf6Jue45Fb_1CwTHbIEDD7H3lT5BHxLeV1Q/preview

Alone Together: Why We Expect More from Technology and Less from Each Other. Sherry Turkle. Basic Books. 2012.

The Accidental Billionaires: The Founding of Facebook: A Tale of Sex, Money, Genius and Betrayal. Ben Mezrich. Anchor. 2010.