At the beginning of March, when I went to the National Gallery of Art for the second time, I was amazed by the Pre-Raphaelite exhibitions. Ophelia, a famous painting by Sir John Everett Millais around 1851, remarkably presented the drowning Ophelia from Shakespeare’s Hamlet. The woman in the water lies quietly and desperately in the stream and are surrounded by “the symbolic flowers that stand for death, innocence and love in vain”, according to the description in its Google Art Project page. I stared at the painting for a long time and was fascinated with the colors of plants Millais used, the ethereal beauty of the woman’s hair and dress he represented, and the dolorous yet peaceful atmosphere he created. I was so excited that I bought a post card of this painting after the exhibition. However, when I went back home, the whole marvelous mystery the painter created somehow disappeared, and I could never have the same feeling for the post card as what I felt in front of the real one.

In the post card case, I encountered what Benjamin would call “the loss of aura”. “What withers in the age of the technological reproducibility of the work of art is the latter’s aura.”(Benjamin, 254) “We define the aura of the latter as the unique apparition of a distance, however near it may be.” (Benjamin, 255) The aura is the authenticity, the unique, special thing in the original. The aura is mom’s recipe, and you can never make the exact same taste of food by following mom’s recipe. The reason why we say the author does not die also lies in here, since the author always has the aura, which even the hi-fidelity digital representation cannot replicate. The power of the author is passed along through reproductions. Every time we capture the original, replicate or reproduce it, we are making a tribute to the author, where the ecstasy of influence appears as what we read last week in Jonathan Lethem’s piece.

Is the loss of aura a good thing? Or, is Google Art Project a good thing? Most might struggle when answering the former question but wouldn’t hesitate to say yes when facing the latter. Benjamin says yes to both. Although we lose an emotion, the loss of aura, or the mechanical/digital reproduction gives Mona Lisa to us, so that we can collect works of art through post cards or online exhibitions and build our own galleries of art, and we are able to travel together with Leonardo Da Vinci. The works of art now have such strong social function: “For the first time in world history, technological reproducibility emancipates the works of art from its parasitic subservience to ritual.” (Benjamin, 256) The cold function of the works of art to general Read Only is replaced by the fact that we could all have them. They can be educational, lively, social, and aesthetical at the same time. Instagram provides us the museum without walls, Facebook photo album provides us the museum without walls, and so does the Google Art Project. “The decontextualized representations of works of art in photographic reproductions in books enabled a reconceptualization of art by styles, abstractions that render a history of cultural objects into ‘art history.’ ” (Malraux, 3) Children of the modern society have the chance to talk with the great thoughts through these representations, which make the great thoughts don’t stand too high above the masses. 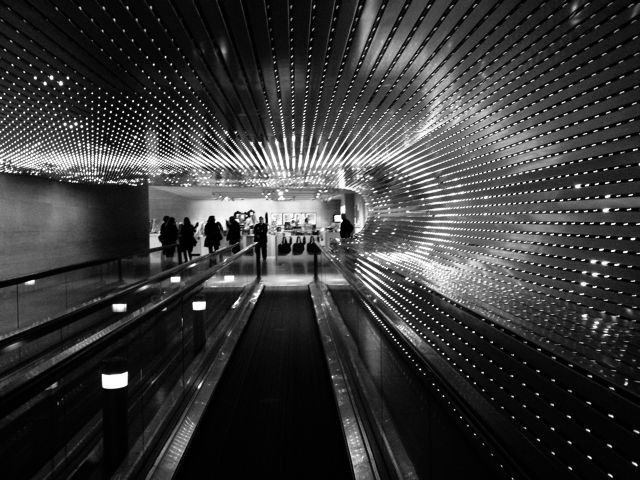 (The passage from West Wing to East Wing in the National Gallery of Art, DC. Photo by Wanyu Zheng)

I’m not yet convinced by the benefits a digital art museum brings us and cannot say I really enjoy the loss of aura. If I’ll have a kid one day, I’d try my best to give him/her a taste of the aura, take him/her to a real art museum, and whisper: “See, they were once so silent.”