Benjamin’s Work in the Age of Digital Reproduction

Walter Benjamin’s “The Work of Art in the Age of Mechanical Reproduction” is a remarkable piece of work not only because of its historical significance for communication and media theory, but also because of its own reproducible characteristics. Professor Irvine wrote in his presentation “Mediation and Representation: Plato to Baudrillard and Digital Media” that if we replace the terms “mechanical” and “technical” with “digital”, then the concerns addressed in Benjamin’s piece seem similar to modern day concerns about digital reproduction. In other words, Benjamin’s theories continue to hold relevance for modern day reproductions of work through digital means. For example, Benjamin’s concepts can be applied to the Google Art Project.

One of the main features of the Google Art Project is the ability to walk through museums’ floor plans. Similar to the “Street View” option on Google Maps, the Virtual Gallery Tour allows visitors to navigate through collections from a first-person perspective with directional controls. This produces a completely unique experience for users that can be linked with Benjamin’s concepts of aura and ritual. Benjamin was interested in the idea that a work of art loses its aura, or unique characteristics, when it is reproduced. The aura of a piece of art is inseparable from its ritualistic basis, whether that ritual is religious or secular. However, Benjamin was quick to point out that works of art produced through mechanical means (such as a photograph) have successfully removed this ritualistic aspect. In the Virtual Gallery Tour, the works of art are not being reproduced as static images. Instead, they are being reproduced within an environment that possesses a ritualistic aura. It might be necessary to then analyze the Google Art Project’s efforts to substitute the realness of a museum in terms of what Baudrillard might consider to be a simulation. The meaning making involved in physically standing inside of a museum may possess a uniqueness that cannot be successfully recreated through the Google Art Project. There are no other visitors in the room with you, you are not able to smell the slow decay of the paintings, and you will never have the experience of repeatedly asking security guards where the exit is located. Are these experiences necessary to absorb and create meaning from a work of art? It may depend on the piece of art and the person. 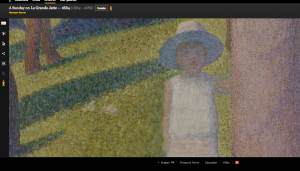 Another feature of the Google Art Project is Artwork View, in which a visitor may roll over a piece of artwork and zoom in to the details. This feature is reminiscent of the advent of the close-up, in which a filmmaker may fill the frame with one detail of an object. Benjamin wrote that this technological advancement served to heighten a person’s “apperception (Benjamin XIII).” Close-ups expand the viewer’s sense of space. Details of objects or movements that had before seemed mundane or nearly invisible (the tremor of a hand, scratches on a doorknob, a drop of condensation running down a glass, etc.) became sources of intense analysis. If these close-ups fill the screen, then the audience has no choice but to become aware of these new optical angles. The same could be said of the Artwork View function. This zoom-in feature allows users to expand their fields of vision and make note of details that might not have been perceptible while in the physical presence of the artifact. A visitor at a museum may be scolded for getting too close to an artifact, and our eyes do not have the optical zoom features of a camera. Consequently, the Artwork View option may have a similar effect on viewers as the close-up did on film audiences. This could result in a Google Art Project user developing a different interpretation of the piece than if she or he relied on her or his own eyesight to view the artifact.

The Artwork Collection function allows users to “save” a piece of artwork to her or his “collection”. Consequently, the concept of a gallery is reproduced digitally so that any user could take on the role of an art collector. Similar to the Virtual Gallery Tour, the Artwork Collection may inadvertently remove the ritual value and/or uniqueness of an artifact. The artifact is digitally reproduced within a user’s collection, and subsequently removed from its physical place within a collection. This change in environment could be considered a paradigmatic alteration that may have a large impact on the ways in which the artwork is perceived by the user. Additionally, Google Art Project emphasizes the fact that users can personalize their own collections. We are encouraged to organize the artwork according to our own tastes. Therefore, users can transfer artworks out of their environments and then rearrange them or place them next to artworks that are physically located halfway around the world. This significantly alters the meaning making process involved in viewing the artwork.

The following excerpt from the film Ferris Bueller’s Day Off serves as another example of reproduction. However, there are a number of processes occurring simultaneously. On the surface of this clip, the three main characters visit The Art Institute of Chicago. It can also be viewed through several layers of reproduction and semiotic analysis. The artwork is being reproduced through the film medium, which can manipulate space and time in order to emphasize certain details of the artwork. The film is then reproduced digitally and archived on YouTube. In order to keep this blog post at a reasonable length, I will list some thoughts that struck me while viewing this clip.