I often ‘favorite’ tweets when I come across interesting posts that I wish to return to later. Last week I came across a tweet from @brainpicker about how modern maps are a multifaceted resource not only for technical geographic purposes, but also for history, individual creativity expression and visual storytelling.

Brainpicker’s website (a project of writer Maria Popova) it explains how maps:

“have undoubtedly changed the world as both objects of art and tools of political power. They help us understand time and make sense of the universe. At their most beautiful, they reflect a level of stunning subjectivity.” http://www.brainpickings.org/index.php/2013/03/07/a-map-of-the-world-according-to-illustrators-and-storytellers/

I found the Text-Centered Model of an Intertextual Meaning System (p.28) as a useful way to apply cartography to the ways we interpret expression.

The diagram below depicts my take on explaining modern maps as dialogic systems: 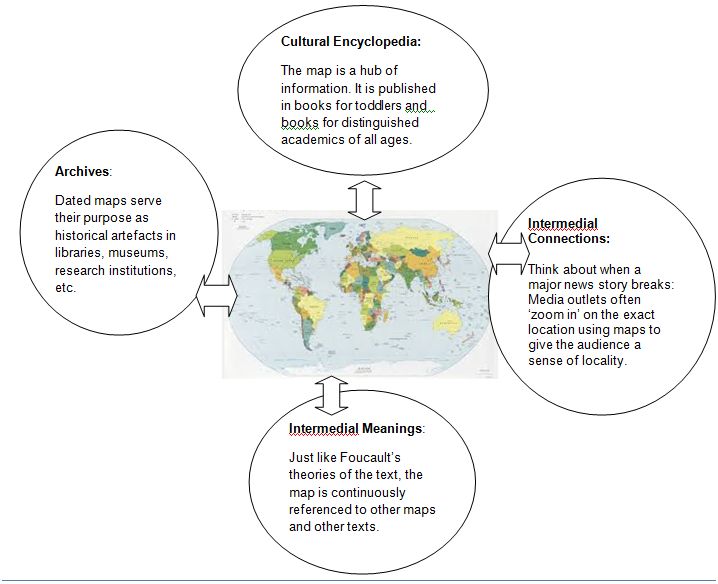 Picking apart the intertextual qualities of the map really makes one realize this seemingly mundane objects contains an abundance of cultural expressions that often are overlooked.  This relates to the idea of ‘unlimited semiosis’ since one can interpret a map through one lens, while another person can interpret the map of a map since the most rudimentary definition of a map is a visual representation of something physical. 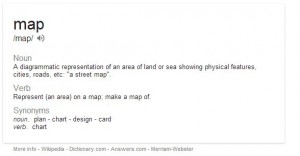 I liked Barthes’ (1971) explanation of the text. At one point he asserts that “the text is radically symbolic” and plural in meaning (p.158-159). The same goes for maps. No matter our linguistic background, nearly everyone can recognize what a map is – this system of symbolic language has been encoded in our cultural shaping. We see the continents which most commonly appear with an image of North and South America to the far left, Africa in the center and Europe and Asia to the far right and accept it as the common structure for how maps should look. Yet what makes maps not closed off completely is that they can be altered and modified. As an example, the map of Vesa Sammalisto includes artwork that tells a story of an island in Spain. The artist uses the map to symbolize the rich culture of this island and at the same time provides useful information for would-be travelers to the island (such as places to dine by the coast, where to go sailing, and locations for bike tours across the land. 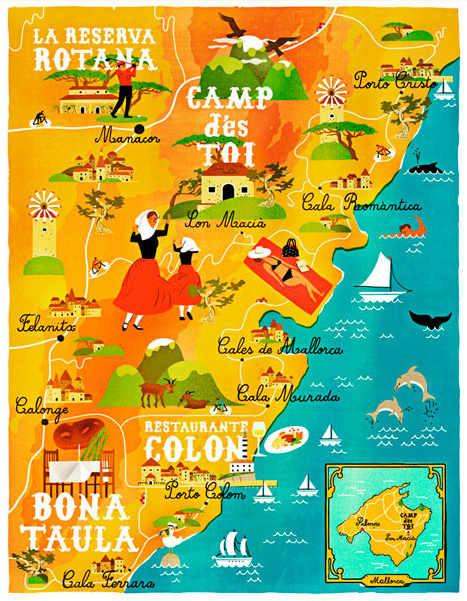 Radford also had some good points on the meaning behind texts, using Umberto Eco as his footing. Asking questions such as “How does this text connect with other texts?”or “What are the codes that enable your understanding of these words?” once again applies to maps when considering them as a type of text. Of course we can misinterpret a map created 1,000 years ago due to semantic reasons, but 21st century maps that are combinatorial in nature present a new array of ways to debate what constitutes a “real” map. Does it have to be physical? Does it have to have a compass? As shown on brainpicker’s website, not necessarily. The art of cartography cannot be limited be antiquated definitions.

To sum, the map is just like any other post-digital media object: it’s future creation is strongly influenced by its past.  There has to be a common structure of what makes a map acceptable and the fundamental components of a map remain the same. But now, interpretation and expression is less restrictive given humans’ receiving of the digital platform. As long as there is a space and place to manipulate, maps will continue to be created for multi-use purposes.

Irvine, An Introduction to Meaning Making Systems and Cybersemiotics