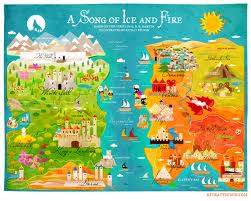 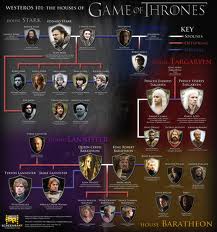 In thinking about dialogism and intertextuality, I typically think of television because there are so many examples of good television pulling from multiple genres and codes. One example is Game of Thrones. There are a lot of aspects to Game of Thrones that could lead to discussion about theme, symbols, genre, and more. Adapted from a series of books, A Song of Ice and Fire by R.R. Martin, Game of Thrones is a story set in a fictional time and place, but it’s definitely historical. David Benioff, one of the series creators, once joked that it was The Sopranos in Middle Earth. It has that Crusades feel of a time in history when epic battles arose with swords, machetes, and armor. One of the major plot lines of the series is a battle for the Iron Throne, which rules over the seven kingdoms of Westeros. But there’s a lot of fantasy, as well. There are dragons and some sort of zombie-like creature that supposedly only come from the North. A group of men guard the wall to north of the kingdom to keep out such creatures. When the story starts, it has been summer for 10 years and there’s frequent mention of the coming Winter and how intense and long it will be. There’s a sense of nobility; a king rules but there are also lower level leaders of regions. And gender and sexual politics are a big focus as there are a couple of extremely powerful female characters, but society is still extremely patriarchal and violent against women. Prostitutes are frequently used as plot devices. Oh, and there’s also an entirely fictional language utilized for one of the groups on the show, with the scenes being subtitled into English.

With all of these different things going on in the plot – they have a constantly updated map in the opening theme song to help keep the audience up to date – there are plenty of examples of things being pulled from Eco’s idea of the cultural encyclopedia. When you first start watching, it seems like it’s just going to be a show about England in the 1400s or that typical type of genre show with lots of violence and politics. But the fantasy element becomes just as present, making a sort of genre mash-up that defines the show. So right from the beginning, the audience needs to understand these two genres to see how they might work with each other. As Bahktin talked about a cultural artifact having a past, present, and future, Game of Thrones looks toward the past within the show itself while instilling modern ideas. The audience is pulling from knowledge of the time period, while also utilizing the ideas of these genres.

Another interesting issue associated with the show is that it’s begun to be referenced by so many other shows and writers. Jokes have been made about the amount of scenes of exposition that take place with sometimes almost comically gratuitous sex scenes taking place in the background. The fictional town of Winterfell has been mentioned in a bunch of sitcoms, including Parks and Recreation. The creators of Portlandia said in a panel once that they had imagined a dream episode of Portlandia where everyone would ban together to kill Joffrey – a character on Game of Thrones.

I think it’s interesting because the show is based off of this series of books, which isn’t even completed yet. R.R. Martin is still working on the ending of the series. But there is all of this original source material as well as the show. Additionally, fans of the show have gotten really into it and started creating wikis and fan fiction and clubs that meet. It’s actually probably good that the ending hasn’t been written yet because the amount of internet activity that happens around this show would certainly spoil the ending before the TV show would get that far. Some fans have gone as far as to start harassing the author, pressuring him to finish the series. They’re worried because he’s overweight and older and they actually are mad that he could die before he finishes the books. Yikes.

Overall, there’s a lot to keep with if you watch Game of Thrones. First, there’s the massive amount of characters and major plot lines going on at any given time. There are multiple locations with major plots happening – completely separate from one another. The landscapes are incredibly diverse, as well, with shooting locations ranging from Iceland to Belfast to Morocco. There’s the history that the shows asks you to remember about the characters – things that get brought up in passing on the show through exposition. They’re asking you to understand and trust the genre(s). Certain things happen almost as if they have to happen as part of the model. There’s a rich system of symbols throughout the fictional universe. You need to understand how things probably worked in the time period of the show, even if it’s unnamed. As Bahktin explains, any sort of communication has each person’s past associated with it. Everything presupposes previous iterations and anticipates a future; everything is part of a working model. Shows like this that rely so heavily on genres that have already been established and are nodding toward common TV tropes and devices, require this kind of dialogism. The audience needs to be on board. And the more they can pull from their own cultural encylopedia, the more meaningful the show will be.