My landlady subscribes to Smithsonian magazine, and the cover story of this month’s issue jumped out at me: LOST TRIBES OF THE AMAZON.  I did a double take: is this really how we are talking, even in the year 2013, about the issues of people living in the Amazon rainforest, involved in a very different daily culture than ours?  Flipping through the article, and catching phrases such as “For decades, adventurers and hunters had provided tantalizing reports that an ‘uncontacted tribe’ was hidden in the rainforest,” I felt like I might as well be reading a 1850s advertisement for a show at the P.T. Barnum Museum, famous for its exotic, its never-before-seen, its freaks-of-nature.  I decided to analyze this story after the model of Rolland Barthes’ mythologies.

LOST TRIBES OF THE AMAZON is a phrase that on the first order combines the signifiers (the words) with a number of possible signifieds (the meanings the words evoke).  Lost could mean confused, missing or vanished.  Tribes, on the first order of meaning, is perhaps more clear: it signifies groups of people, not too large, bonded in traditions, culture, and/or heritage.  And The Amazon is of course a geographic location, a rainforest covering much of South America.  But just as Barthes found in the myths he analyzed, one does not find the real depth of meaning by analyzing the first order signification.  The title, the article, the accompanying photos and the dramatic story they invoke are all signifiers in a long-standing, oft repeated myth: the myth of the past, pure and untainted yet exotic and also, importantly, endangered.  This myth puts us westerners in the position of power in both the destructive way (our past actions have made these tribes endangered) and, perhaps even more importantly, in the beneficent, positive way (if we give great effort, we may still be able to save them… or at least study them before it is too late and in that way, even if the tribes themselves are ‘lost’ forever, human knowledge will still have record of them.)  In fact, a call for “rescue” is the ideological purpose of the article.

In a synthesis of Barthes’ thinking Allen Graham wrote that “culture generally… constantly presents artificial, manufactured, and above all, ideological objects and values as if they were indisputable, unquestionable and natural.”   The Smithsonian article does just that.  Readers are taken in by the authority of the Smithsonian institution and the magazine’s scientific genre.  This keeps them from questioning how ideological the writing is. 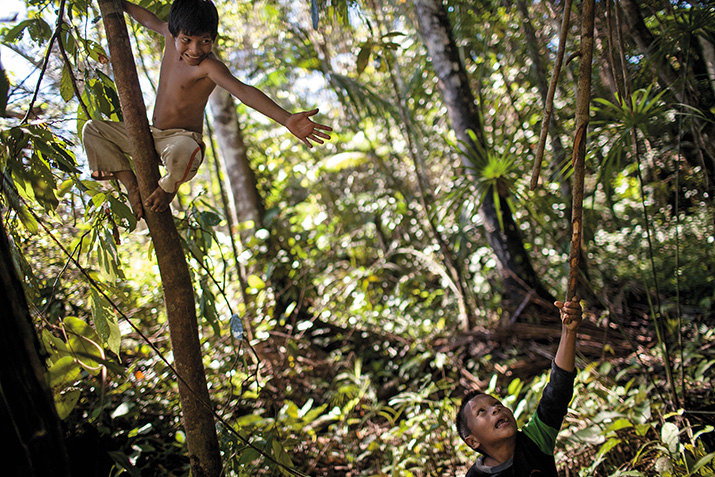 While this article and the myth it signifies could be examined in far more detail than I am able to do here, I want to give one more example.  Here is one of the central photographs of the article.  It shows two smiling boys, one shirtless, and climbing a vine, a look-alike for the character of Mogli of Disney’s The Jungle Book.  Even though we know these boys were not raised by wolves, (the caption even mentions their father “Garcia”) the image acts as a metaphor to The Jungle Book and puts this idea of humans-not-quite-human-but-part-wild-animal in our unconscious.  The caption to this image (not seen here) says “Garcia’s son José and nephew Mauricio are schooled in forest lore: They can already identify dozens of medicinal plants.”  A couple of meanings jump out at me from this.  First, the Spanish names of the family members is a clear sign that these supposedly ‘uncontacted’ tribes must in fact already have a long history of connections with Colombia and the world outside their Amazon home.  Second, the metaphor in the word “schooled” allows readers to make a direct comparison between “civilized” schools western children attend and the “wilder” daily lives of these boys.  Finally, the word “lore” is very ideologically chosen.  Lore does not mean contemporary knowledge but ancient, generally false myths, based not on scientific understanding but on fantasy, superstition, legend.  Yet the “lore” these boys are learning is not some kind of equivalent to Santa Clause, but important medical information.  Using the word lore, the writers for Smithsonian magazine can downplay the validity of this knowledge, and keep consistent the message that these people are uncivilized and need saving.