Meaning-making processes take place both within and across media forms and genres. It may prove useful to deconstruct these intersecting symbolic systems and look at them individually before being able to draw definitive connections. For example, the “Zombies, Run!” iPhone/Android application draws on multiple meaning-making processes in order to immerse the user into the experience of the game.

“Zombies, Run!” is an interactive game for iPhone and Android phones developed by Six to Start and Naomi Alderman. The premise of the game is that the user is a survivor of the zombie apocalypse along with the other characters in the game. The user is taken through a series of “missions” that follow a storyline about a makeshift base called Abel Township. Characters instruct the user and talk to each other through the user’s headphones. The user must complete each mission by running for about a half hour or more. The user is referred to as “Runner 5”, and is part of a team of “runners” that collect supplies and other important artifacts for the survival of Abel Township. If the user turns on “zombie chases,” then she or he must increase her or his pace during certain moments in each mission in order to outrun zombies. The game uses audio signals to tell the user when zombies are close by. When characters are not speaking to the user, the game plays the user’s music. “Zombies, Run!” works well with Barthes’ cultural semiotics model in that it makes use of the second mythological layer of signification that Barthes explored in his writing. 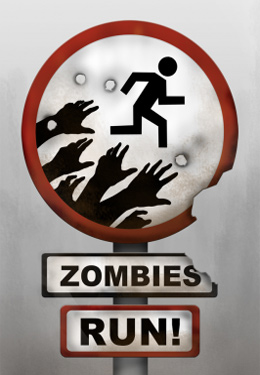 The Zombie Genre
Barthes introduces a third concept for semiotics that embodies the cultural component of any given sign. He describes the signification of myth as signs that are re-used by cultures across different texts and media forms. This “second-order meaning,” as Allen calls it, functions as another layer in the signifier’s meaning making. In the case of “Zombies, Run!”, the zombies are representative of the enemies to be defeated in the game. However, zombies are particularly symbolic to Western cultures. The zombie genre has existed for many years, and was most notably demonstrated through George A. Romero’s films as commentary on Western society. Zombie genre texts have since then followed a certain code that utilizes all of the same characteristics: flesh eating undead creatures that were transformed from a contagious epidemic. “Zombies, Run!” follows this code in order to facilitate both the storyline of the game and its function as a fitness app. The user is a survivor in what is generally termed “the zombie apocalypse” and must run from creatures that are well-known to many Westerners and fans of the zombie genre. 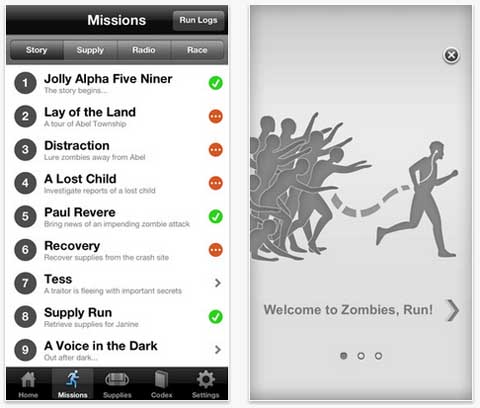 The Radio Play
Marcel Danesi made mention of the infamous radio play War of the Worlds in his writing. He used it as an example of “the simulacrum effect”, in which media and reality blur in such a way as to affect an audience’s perception. Some listeners, for example, became panicked while listening to Orson Welles’ retelling of the story and notified the police about an alien invasion. The format of the radio play has now been codified in such a way that “Zombies, Run!” is able to use it for narrative purposes. As the user runs, characters tell Runner 5 to run faster or that she or he is doing a great job, and sometimes they describe where Runner 5 is supposedly running in terms of the environment within the game. The user is not completely may not be entirely taken in by the story because she or he is familiar with the code of a radio play and the blurred lines between the text and her or his reality. Another effect that “Zombies, Run!” employs are the sounds of zombies. The heavy breathing and growling of the zombies grows closer and closer if the user does not speed up as instructed. This audio effect, much like the simulation of the news broadcast in War of the Worlds, is supposed to employ the simulacrum effect in such a way as to motivate the user to increase her or his speed.

I/You Significance and Personalization
Another semiotic aspect of “Zombies, Run!” is its employment of “I” and “You”. The characters in the game address the user as “you” and “Runner 5,” which the user then interprets as a direct form of address. It transforms the user into an objectified character within the narrative story. This signifies the personalization effect of the game, in which users are led to believe that the game is tailored specifically for her or him. In actuality, the game is mass produced and the characters call every user “you” and “Runner 5”. Another method of personalization is that when characters are not speaking, the app plays the user’s music. There is a “radio mode” as well, in which two DJs break up songs with commentary about the apocalypse and also introduce the user’s songs with general statements that can be applied to any type of song. This is a simulation of personalization, but users are encouraged to interact with this simulated experience in order to enjoy the game. 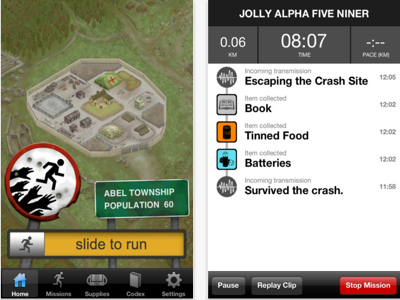 Video Game Codes Within “Zombies, Run!”
There is another cultural code that is used in “Zombies, Run!”. This code developed over years of video game history, and is employed within the world of “Zombies, Run!” through the use of mapping and item collecting. These are RPG (role-playing game) video game features. Games like Legend of Zelda and Final Fantasy are some of the more popular and well-known games that have established this code through the RPG video game genre. “Zombies, Run!” users collect items as they run and are notified of these items by a voice in their earphones. After they have completed a mission, users drag and drop these items from their inventory into different sections within a virtual map of Abel Township. The designers of the game also recently introduced ZombieLink, which tracks a user’s personal running performance and displays a map of the user’s route. If users are familiar with the intertextual signification of these video game features then the game becomes easier to navigate.

Interpellation
Barthes writes about the interpellation process of meaning-making. He uses the example of looking at a Basque house in Spain, and explains that “the concept…comes and seeks me out in order to oblige me to acknowledge the body of intentions which have motivated it and arranged it there as the signal of an individual history (Barthes 123)…” The different historical and cultural processes behind “Zombies, Run!” seems to call out to its users in a similar fashion. It hails its audience through cultural codes such as the zombie genre and the radio play format. It also directly addresses users through the use of language indicators like “I” and “you”. These signified messages that are embedded within cultural myths seem imperceptible to users.