According to Bal, signs only emerge in relation to other previously produced signs (7). This is perfectly evident in the case of comics, where signs recognized can always be traced to other semiotic systems such as film, photography, and history. This week I am going to analyze one scene from the comic The Ravages of Time by Chen Mou. This is the part in which Lv Bu tries to send his daughter to marry Yuan Shu’s son for alliance but loses her in the breakthrough battle. Besides background information obtained from earlier chapters, there are still two major layers in understanding this particular sequence, one is what some would call comic literacy, and the other is heavily based on prior knowledge of Chinese culture. 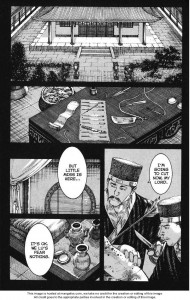 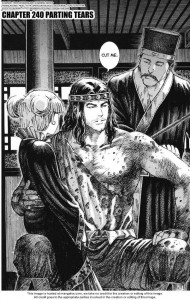 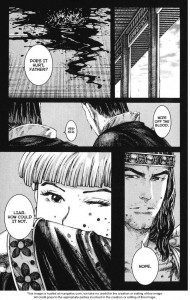 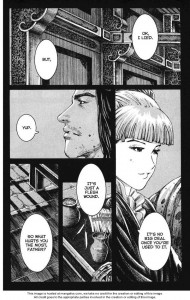 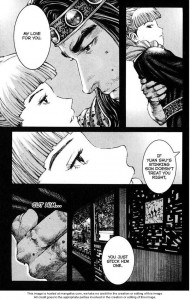 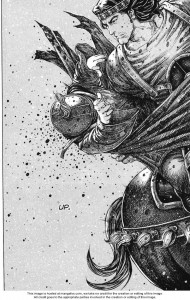 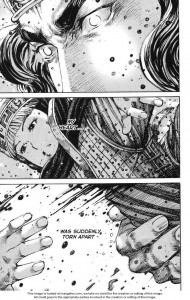 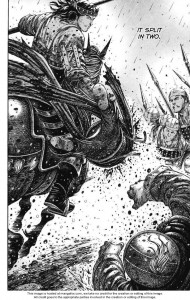 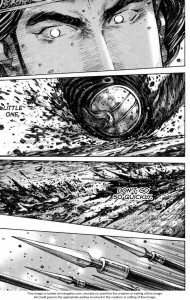 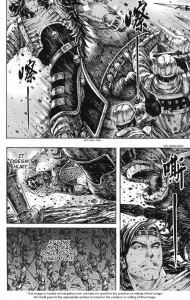 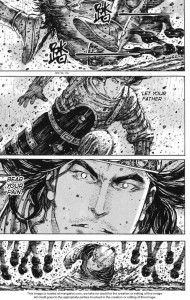 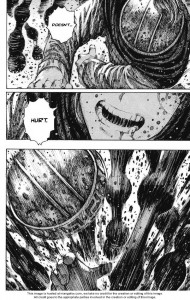 First of all, just by look at the thumbnail pictures, one would be able to tell that this sequence consists of two parts: the flashback (where the background outside frame panels is black) and the “now” (where the background is white). Here it is the difference that yields the information. The same practice can also be seen in films, where flashbacks are most often accompanied by noticeable special effects such as a vignette or a different color theme. Even if readers do not immediately recognize this, either because they were less familiar with the vocabulary, or simply because they read page by page so they can not detect the difference right away, there is still another clue for understanding the time change: the tempo. While the flashback consists of entirely static shots, the “now” is filled with action. Such sense of movement is conveyed both through the use of motion lines and Dutch angle shots. The use of motion lines (McCloud 110) came from photography, where an image would appear blurred when the shutter speed is not fast enough. This technique has been brought to an extreme by Japanese artists in the late 60s and is widely used across the globe. Dutch angle shots, or canted angle shots, on the other hand, is a technique from cinematography of showing the image as tilted to one side. It is normally used to create tension. Here, the author has managed to bring even more tension to it by adding slanted panel frames on top of canted images (Such as in page 9; this is relatively rare in Chen Mou’s work).

Now let’s look more closely at the images themselves. Chen Mou employs a style that bears greater resemblance to reality than most Asian comics. Such a style does not only have aesthetic meaning, but also decides how much information is contained in the images. The hotter (McLuhan)/more realistic the style, the lesser a reader will be able to participate in it. However, in this case its role as indices (Peirce) becomes more prominent. For example, let’s look at the first two panel frames on page 1. From the images alone, we can infer that this part of story happens in ancient East Asia (from the first panel), and probably involves either torture or surgery (second panel). Now imagine if the first panel was a stick figure of a house and the second one extremely abstract lines of knives and needles with no detail for the blood: there would be too many possibilities and thus no useful information. (If an artist chooses that style, it is usually for the purpose of creating intentional ambiguity.)

However, this level of interpretation demands a combination of recognition, connection and previous knowledge (Bal 12). A detailed image would only reveal more information when the reader has certain culture backgrounds (Chinese culture in this case, but it can also be things like otaku culture or sci-fi culture). Let’s now take a look at page 2. Since Chen Mou is not particularly concerned with historical accuracy, let’s suppose we do not know that this story is based on the history of the Three Kingdoms period, and only try to decode the information encrypted in this image alone. With the background, again, the reader can tell this is based in ancient East Asia. From the clothing on the standing man on frame-right, we can infer that the story is set in ancient China. Then we move onto the man sitting in the middle. He’s muscular, his clothes are half off, there’s blood all over his body, and there’s an arrow in his left arm or upper left back. From these, combined with what we’ve been used to seeing from war movies (but not documentaries), we can deduct that he has just came back from a battle. And from the way he sits, with his back straight and hand on his knee, we draw from our daily experiences and think he is a man with dignity and probably some social status. Combining this with the last clue of battlefield, we make a guess that he is some kind of a general. For someone familiar with Chinese culture, the image of a general with an arrow in his arm would remind us of the story of Guan Yu, who’s been praised for not showing fear when the doctor took out a poisoned arrow from his arm. However, we would also know that this man is not Guan, because he does not have the signature long beard. In fact, his hair is kept in a way completely different from the mainstream custom (see the standing man), that we can see a hint of barbarism on him.

The interpretation can go on and on, and this is not yet to count in the words accompanying these images. Yet these all happen almost instantaneously without the reader noticing it. Our minds are amazingly good at recognizing patterns, making associations and drawing on previous knowledge in a flash of second. However, without pre-established, widely shared semiotic systems, the author would never be able to convey any useful information to the reader, and the readers would have rather difficult times with interpretations, while never able to make sure if we indeed understood the meanings.