The Semiotics of Sequential Art
by Sara Levine

Introduction
Semiotic analysis provides an essential toolkit for conducting a close study of cultural products such as advertisements, film, photographs, and so on. Daniel Chandler’s Semiotics for Beginners, for example, contains an entire arsenal of concepts and ideas that can be applied to a number of cultural forms and genres. This application of semiotic technique may reveal what is denoted and connoted by the work, and messages that are intentionally and unintentionally communicated to the audience. So, how do we study the comic book art form through semiotics? The combination of text and images is a little overwhelming at first. However, this medium may seem less intimidating with the help of Scott McCloud and our semiotic toolkit.

Here is the selection I have chosen for this particular semiotic study: 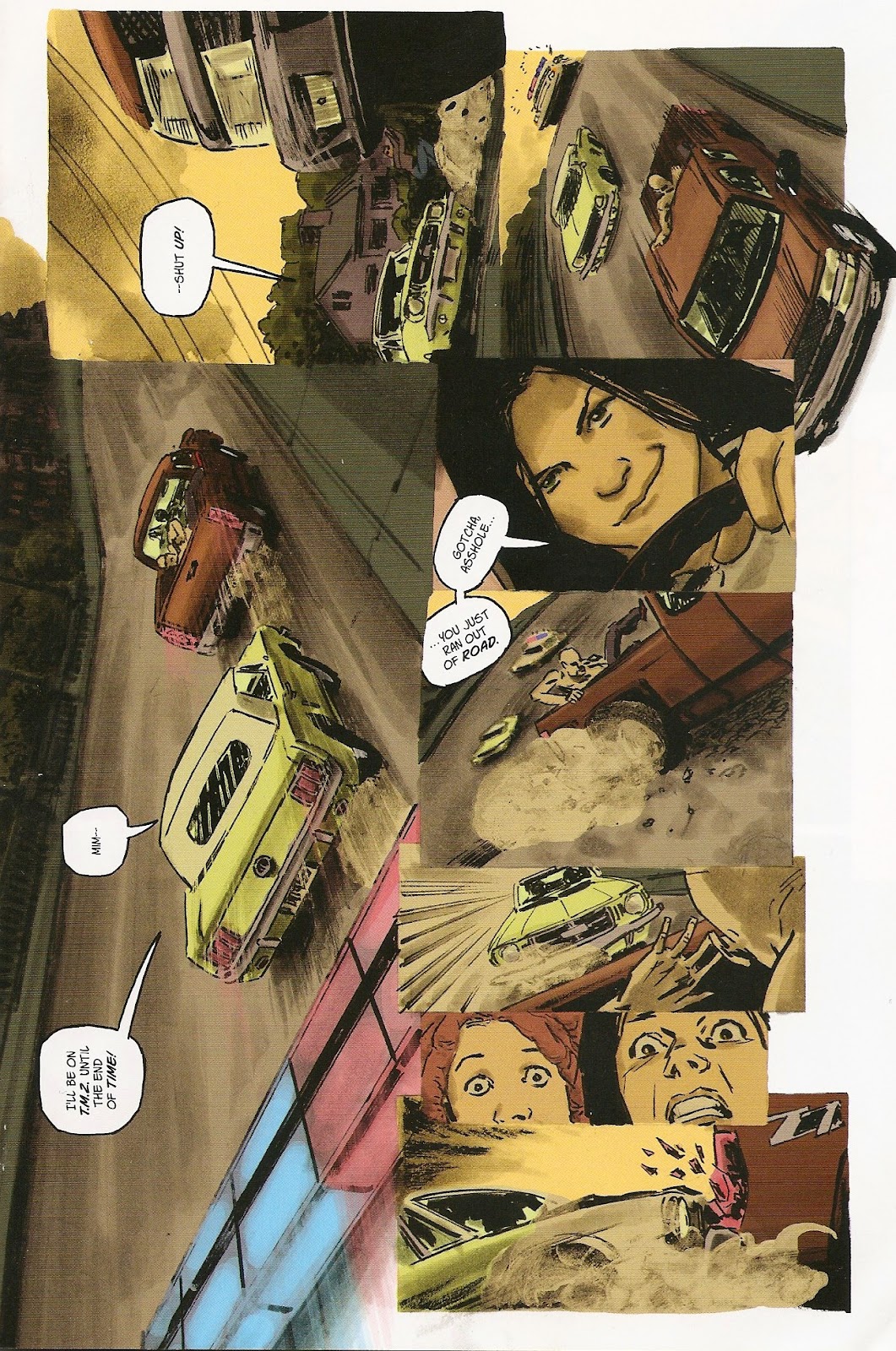 It is a page taken from Greg Rucka and Matthew Southworth’s Stumptown series, published by Oni Press.

Layout
When we look at the page as a whole, the layout may be the most noticeable aspect. American comics have their own code for the layout of a page. This code dictates that the viewer read panels from left to right, and top to bottom. Additionally, most comics, as Scott McCloud points out in Understanding Comics, contain “gutters.” Gutters break up panels using borderlines around the images.

Southworth and Rucka seem to have broken away from this formatting technique. The syntagmatic structure of the panels is confusing at first, and if the viewer attempts to read from left to right and top to bottom the page wouldn’t make much sense. However, if she or he had been reading the comic book from the beginning then she or he would have started reading the page with it tilted 90 degrees clockwise. Then the reader would follow the panels from left to right until the second row of panels, at which point she or he would tilt the page 90 degrees counterclockwise. What is missing from the layout of the page? Paradigmatically speaking, there are no gutters or borderlines for the panels. In addition, the panels are all overlapping one another. The denoted message of these layout changes might signify Southworth’s particular art style, or quicker pacing in a high stakes car chase scene. However, there is an underlying connotative message here as well in regards to how the creators would like the audience to look at the page. It could be assumed that this connotation has something to do with how comic books as an art form should or could be read.

Positioning within Frame/Perspective
Composition within panels is another important aspect of the comic book art form. I won’t analyze every single panel composition here, but there are a couple of notable examples. 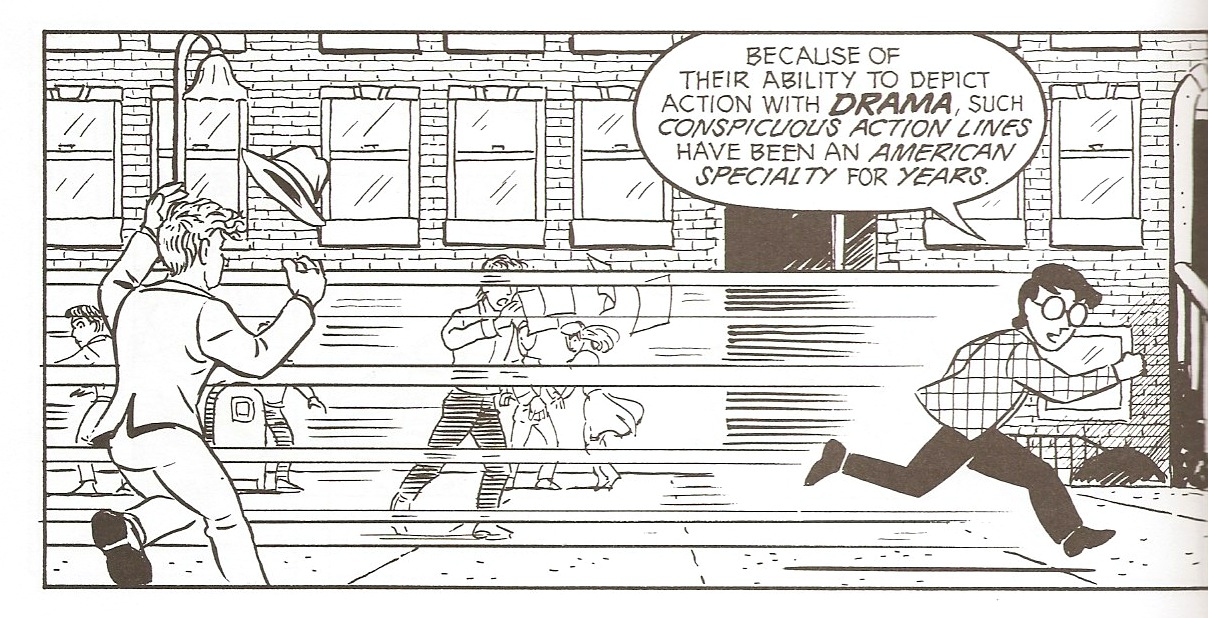 Color/Art style
Color and art style can also function as signifiers to comic book readers. Some comic books are not printed in color, but Stumptown is awash with murky coloring. There are a lot of browns and grays on this page. The signified interpretation may at first seem like a style choice on the part of Southworth, but a connoted interpretation may have something to do with how Rucka and Southworth wanted to depict Dex’s world. Perhaps this is a nod to Portland (where Stumptown is loosely based on), or maybe Rucka wanted a grungy look that would complete the feel of a PI genre story. Another color choice that creators make are codes for certain characters. Superhero comics use these codes over many years for a certain character (i.e. Superman is associated with red and blue, Batman with black, etc.) Why red for the villains’ truck? Why a truck instead of any other car? The same could be asked of Dex’s car of choice. The deep magenta of the truck seems complementary to Dex’s green car. Consequently, perhaps the depiction of these two juxtaposed against each other serves to highlight the conflict between the characters driving the vehicles.

Text/Art Relationship
The separate symbolic meanings of text and image take on new meaning when they interact. There is more art than text on this particular page, but the interaction between text and artwork is vitally important to any comic book page. Scott McCloud categorizes several different types of text-image interactions. This list includes word specific, picture specific, additive, parallel, montage, and interdependent combinations. This page might fall under additive because the text serves as supplementary dialogue to the action unfolding on the page. Additionally, Southworth and Rucka actually tilt the text and word balloons along with the images in order to signify to readers how they should follow the story down the page. However, there may be another, connoted message involved in the tilted word balloon. I believe that this message is related to the very physical interaction that the reader is having with the medium. The reader is moving the images and helping to create the action on the page rather than simply staring at the panels. Rucka and Southworth intentionally tilt that speech bubble in order to augment the experience of tilting the page. 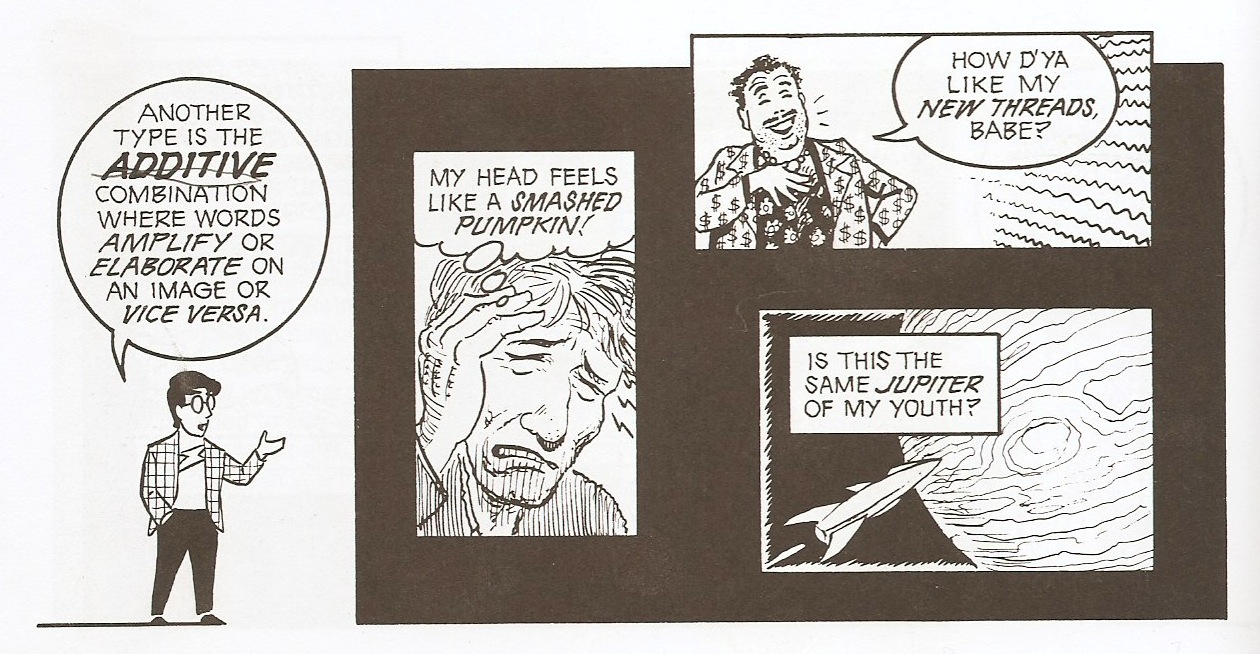 Intratextuality and Intertextuality
There are a few instances of intratextuality and intertextuality on this page as well. There is intratextuality in the knowledge a reader may or may not possess about how to read this page. A reader would not know to tilt the page unless she or he had been reading this comic book from the first page instead of opening it up to the current selection. An element of intertextuality remains buried in the narrative of the story. Greg Rucka ends every issue with a brief discussion of the role of the private investigator (PI) in American crime stories. He writes about how he constructed this story and its characters with the PI genre in mind, and makes references to other famous PI genre writers such as Raymond Chandler and Dashiell Hammett. Only a reader who is well-versed in the code associated with the PI genre may appreciate all of Rucka’s references.

Conclusion
The overall denotative message to the audience is that they are reading a car chase scene in which Dex is attempting to pursue the story’s villains while being trailed by the police. The argument can be made that this comic book also serves as a connotation referring to the American PI genre of storytelling. Perhaps that message may be about exploring the best elements of the genre with a woman in the lead role instead of the usual Sam Spade character. However, I do not think that this page is completely representative of that message. Instead, I would like to focus on the interaction between the reader and this selection. Most of the notable signifiers in this selection are related to the physical interaction that the reader has with this book. The act of reading any comic book is an interpretive and interactive experience. However, this page (and several others throughout this issue) highlights the physical work that a reader must engage with in order to continue the story. Perhaps this movement signifies Rucka’s intention of connecting the reader with the story in a visceral manner. The turning of the book mimics the turning of the wheel as Dex drives circles around the villains in the red truck. The action seems more real to the reader if she or he are somehow involved. The majority of this book is the car chase scene, and so turning the book breaks up what could be monotonous action shots. There may be another connotation about comic books in contrast with digital copies and web comics. I am not sure how this page would be read on the iPad, but it doesn’t seem to evoke the same experience as holding the comic book pages in the reader’s hands and turning it along with the story. Interaction with a screen showing moving images in a comic is very different than interacting with the physical comic book medium.