The topics of meaning making, sign systems and semiotics related to media theory can relate to a number of everyday human encounters, including music. Music has proven to be an inter-relatable subject in the field of media theory, and I found it useful to analyze a different style of music (that we have not talked about yet) with the idea of the ‘semiosphere,’ and theories of de Saussure and C.S. Pierce. The music of King Sunny Adé may not be a household name, but his music reveals distinct cultural values enmeshed with linguistics and signs.

King Sunny Adé of Nigeria is known as an influential “pioneer of modern world music” specifically for his Yoruba jùjú music (“King Sunny Adé”). Jùjú music is characterized by its emphasis on drums and the term literally means “throwing” or “something being thrown” in Yoruba language. (“Jùjú Music”). For many Nigerian artists and musicians, music is a performance and a way of life. One of his works that can be analyzed in a meaning-making context is “Suku Suku Bam Bam.”

I like to describe Adé’s music as soothing and mellow, with a familiar flow of drum beats and guitar strums comparable to the Caribbean or Jamaican music. Thinking of how Adé created meaning behind his music, the idea of the semiosphere (the socialness of humans and our desire for meaning making, which occurs in interconnected systems) can apply (Irvine). When Adé made this musical artefact, chances are he was influenced by other “second order systems” such as literature, art and other music (Irvine p.12)  instead of being inspired in an isolated state.

Language is yet another major influencer for media-related processes, and is required to make music. De Sassure took a technical approach by defining language (making clear distinctions on what is not language and what is speech ) and arguing that language is not only a social institution but “…a system of signs that express ideas” (p.15). Music, then is just an extension of language and speech (once again proving the interconnectedness) of how people can express ideas. Using de Saussure’s Place of Language in the Facts of Speech concept, he claims that the act of language “…requires the presence of at least two persons; that is the minimum number necessary to complete the circuit.” (p.11). 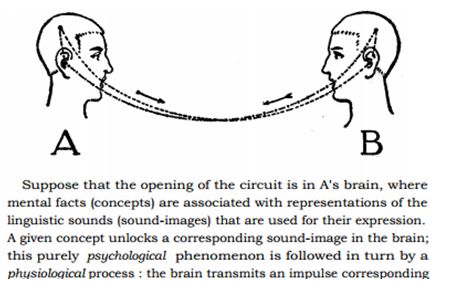 If that is the case, a similar approach can be applied to music. For meaning to be transferred, there needs to be at least another person to receive the information. Thus music, like language is “the social side of speech,” to use de Saussure’s terms (p.14). Furthermore, making music for oneself defeats the purpose of sharing information. One must keep in mind though, that when it comes to music, the outputs are so fragmented through the mediaspehere (videos, live performances, mp3s, etc.,) there it is hard to have a true 1:1 conversation or simultaneous circuitous response with the musician at any time. As popular as King Sunny Adé’s music may be lyrics, translations and significant scholarly review of his work is hard to come by. This leaves his audience to fully interpret his music and decipher what kinds of meaning he wanted to get across. As this YouTube user writes: KSA (King Sunny Adé ) “Is the ultimate Yoruba linguist, always using verbs and proverbs to instruct.”

This comment on YouTube shows how meaning-making rests heavily on signs and symbols, which all find their place in mediums such as the Internet. According to C.S. Pierce, there are three kinds of signs: likeness, indications, and symbols (p.5). Receivers of Adé’s linguistic metaphors (aka his music) can show their likeness by imitation such as commenting on his work or doing covers of his music. Pierce defines indications as a way of illustrating things through a physical means (p.5). As initially described, the unique guitar riffs and percussions are indicators of Adé’s music that imply “this is Adé’s music!” to gain the attention of people. Lastly, symbols are of importance because meaning comes from its use. Pierce gives the example of phrases, books and libraries. Just as the library is more than a building that holds books, music is more than the singing of words. King Sunny Adé’s music is a versatile symbol that varies in its use from person to person. It allows individuals to find their personal meaning (such as “I feel so connected to my heritage” or “I have discovered a new realm of music”) which is a constant process.

Much more can be discussed about music and meaning making or music and symbolic systems – my goal was to see if I could uncover something new about how music can be a meaning-maker and relate to symbolic systems. If anything, this example proves how language (specifically linguistics) and individual meanings/representations of the world have social implications that unravel each time new issues are addressed.