When thinking about “media” and “medium” this week, I couldn’t help but keep thinking of the “actual” media most people consider today. The role of traditional media versus new media is something we talk about a lot in CCT, and something that has been particularly on my mind lately as I think more about what I want to do in the future. In the traditional sense, at least for let’s say the time period when I was growing up, “media” meant newspaper, television, magazine, and radio. Each of the different mediums had different implications. Newspaper was to be the most trusted. It had the venerable institutions like the New York Times and the Washington Post. This is Woodward and Bernstein breaking Watergate, well-known columnists like George Wills or Nicholas Kristof, and the Associated Press. Television media was usually a little softer and included more interviews or human interest pieces, but still, there were television news anchors who you could trust. I remember mostly Barbara Walters, Tom Brokaw, Dan Rather, and Connie Chung. For radio, you had Ira Glass. And magazines like Newsweek, Time, the New Yorker, and the New Republic covered more long-form news stories usually on a weekly basis. 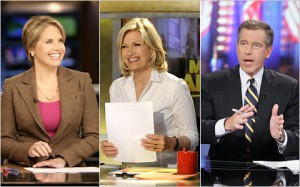 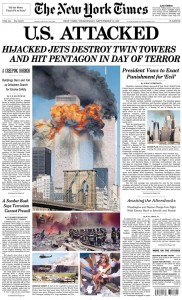 Thinking about the traditional media I grew up with, and sure I was young and a definitely idealistic journalism student, I was reminded of the power of the medium. In Professor Irvine’s chapter, he mentioned the idea of how power or authority can be transmitted or mediated through the medium itself. There are social, cultural, and political messages that are transmitted through certain mediums. And these big old-school type of media institutions I think definitely transmit a certain amount of power. Or at least they did. I hope they still do. The idea of the broadcaster that you trust is something that was highly revered in American society. This is a passed down tradition of hearing your news from the same source, and someone who was typically pretty objective. While that has obviously changed in the last couple of decades, the idea of the medium still stands – in a way.

New media brings social media, user generated content, citizen journalists, and a 24-hour news cycle. The Internet has no doubt changed how things are reported, how they are packaged for consumption, and how people typically get their news. I think the panic that print is dying is a little premature, or that traditional news outlets will cease to exist. I think the sociocultural power is still behind the venerable news sources. Sure, we might get the headline off of the New York Times twitter feed or iPad app, but I’m personally still going to the Times. McLuhan posits that the medium is the message – that the content doesn’t really matter. While hopefully this isn’t entirely true with news, I think it’s an interesting lens to consider the media today. If the medium is the message, what does that mean? Does that mean that newspaper content is still transmitted as an important, serious matter? Do we still buy into the television news anchor and the prestige?

Last night, I watched the State of the Union address. Brian Williams was doing the post-speech coverage for NBC and had some of the usual talking heads on to talk about their perceptions of the speech and how they think it will go over for the public. I’ve personally always appreciated this kind of insight or analysis (though it’s decreasing with the downslide into supremely partisan conversations). At one point, though, he read a tweet from one of Romney’s former aids in regards to the Marco Rubio water scandal of 2013. The guy said he would have put the water bottle closer. While he was obviously right, it was still so funny and interesting to me that one of these big TV anchors was using twitter as part of news coverage. It’s becoming more and more common. During election coverage, multiple news channels incorporated social media into the broadcast. This is the convergence of media. The integration of everything onto one platform – the metamedium. Now news media consists of the words or written pieces by these news institutions that transmit power and authority, partnered with photo, video, and social media content. This is sort of a “warm” media on McLuhan’s scale of hot and cool mediums. If hot mediums require no participation, like a film, where things are just transmitted at you, and cool mediums require the user to fill a little bit more in, then “new” media is kind of a mashup of the two. 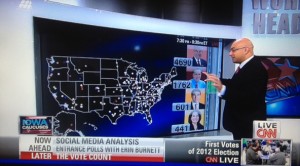 All I know is while I was watching the State of the Union, I wanted to watch the speech uninterrupted. Then I wanted to hear some news feedback on it. And the entire time, I was scrolling through twitter. I was on one hand reading what some of my classmates were saying and interacting with them, but also seeing headlines come in from major news sources and specific journalists. I was getting their reactions, as well as quotes from the speech itself. I saw the White House feed which was linking to specific action plans. The entire experience showed the metamedium of digital news, but each different medium plays its part. Some of the older mediums are still flexing that traditional power and authority, but their utilization of new media is becoming necessary as a new form of technological power. The social media aspect is still gaining its credibility; it has a ways to go to get the prestige and power as its medium on its own. The medium as the message can still be noise when it comes to social media. There were a million people who were uninformed who I could have chosen to watch on twitter last night. But the curation of traditional news sources on the new medium seems to be where it’s all going. My feeling is the newer online news sources which are mixing these all together will do the best at least in the near future. Sites that have been recently redesigned or launched, like the Business Insider or Quartz, which rely solely on online content, but have poached writers who are real journalists from traditional news outlets, seem to be the new trustworthy sources for the web. And traditional newspapers are finally starting to consider online content in its own right, which is also promising.