From personal experience, the term “new media” is frequently bounced around in advertising brainstorm sessions. When this word is brought up, the unstated understanding is that “new media” refers to strategies that target a particular demographic online, specifically through the use of social media websites. Lately, Twitter has been the avenue of choice because of its instant connectivity to large amounts of people and ability to provide witty, time sensitive responses at a much lower cost than traditional television or print ads.

However, as mentioned by Friedrich Kittler, “New media do not make old media obsolete; they assign them other places in the system.” This assertion is particularly true in the recent case of “new media” advertising by Nabisco and its Oreo Cookie division. The people behind the Oreo Twitter account devised a way to combine traditional print media with the low cost, high volume accessibility of online social media. This quickly devised campaign started during the Super Bowl blackout when @Oreo posted this image:

The image was a hit, and many advertising professionals hailed this incident as another “new” advertising trend. But how “new” is it really? Going along with Kittler’s statement of old media not being obsolete, we can see that although the visual Oreo strategically released is distributed through a different channel, it is still a square, two-dimensional image that recalls billboards, posters and paintings of the past, all of which similarly set out to express a meaning or instruction to large quantities of people at once.

The manner in which this image spread virally is also derived from early print culture as described by Elizabeth L. Einstein when she referenced an “explosion of knowledge” that occurred in the sixteenth century. She cites that this era signaled a time of “intense cross-referencing between one book and another,” which is an idea that is very familiar to the way in which advertising via Twitter (and viral material in general) operates today. By reTweeting, or reposting the original image released by Oreo, people are inherently cross-referencing one another since the source of the viewed image could be from the brand itself or from one of their friends, and the cycle continues as long as there are more people who think this material is worthwhile.

Oreo’s success at the Super Bowl prompted more versions of this online poster to be released for other occasions like the Grammy Awards and Fat Tuesday. This continued practice of something that seemed novel at first further highlights Einstein’s description of how, “increased output… created conditions that favored new combinations of old ideas at first and then the creation of entirely new systems of thought.” In other words, more of the same type of media was released and due to positive responses to these seemingly new types of ideas, we now have a new manner of thinking of online advertising. 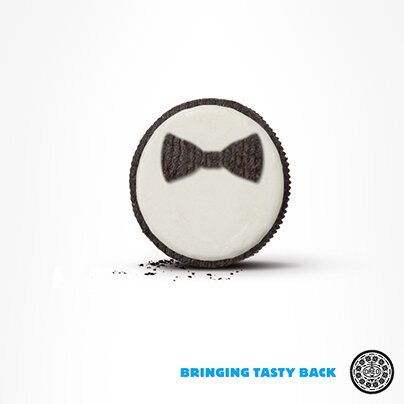 Following McLuhan’s proposal of the media being the message and applying it to this scenario, it is undeniable that the message of Twitter resonates within Oreo’s advertising attempts. Twitter allows for people to share opinions and updates on an online platform, but it limits the amount of characters a person can use. In this way,  it forces visual messages and other short blurbs to be shared more frequently because they are easier to view, thereby making visuals  like the Oreo ad an incredibly appealing manner of communication. The medium limits verbal communication, so the message ends up being something that can easily be inferred without the use of words and that largely depends on some kind of shared experience between users viewing the communicated message. This combination of media and message seems to be working well for Oreo, so we can look forward to more funny, time-relevant ads popping up in the future.

Marshall McLuhan, “The Medium is the Message,” (Excerpts from Understanding Media, The Extensions of Man, Part I, 2nd Edition; originally published, 1964).