With continuation into the depths of media theory, particularly mediums, media and mediations, I was fortunate to view some of the work by Nam June Paik in the last few days. Paik crosses traditional lines of art by incorporating unique and sometimes taboo television and video media into his art. In a figurative and literal way, Paik used art to “get out of the boxes” by using the medium of media to show that there is more to something than its technical inner workings or apparent social uses.

Art vs. Media vs. Communication

Seeing Paik’s work in person at the Smithsonian American Art Museum put much of the historical texts related to media theory to life. What first came to mind was how to distinguish between the difference between art, media, and communication. According to Gitelman, media are “socially realized structures of communication” whereas communication is “a cultural practice” often defined through rituals that people share (2008, p.7). This can be language, history or other means. Media, also left to the description of Gitelman, was termed as “unique and complicated historical subjects” (p.7). This description bodes well with the general perception of media, but when we begin to unravel what is dependent on media and what allows it to function, new lines of thought emerge. 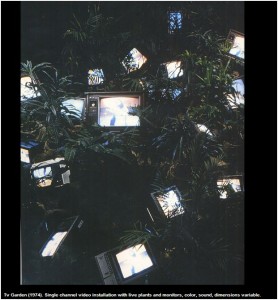 One of Paik’s pieces that first stood out to me was “TV Garden,” which hosts numerous televisions sprawled on the floor, enmeshed in a jungle of foliage. Each television had some action going on – whether it was a distant televised segment of the past or random lights emitting from the antiquated screens. This is where McLuhan’s theory on the medium comes in. One of the many relatable points by McLuhan involves content and the state of media. First, McLuhan claimed that society was undergoing a transition from placing more emphasis on the effect of media rather than meaning. To McLuhan, “…effect involves the total situation” (1964, /26).

Recall that McLuhan’s The Medium is the Message was written in 1964. Paik’s “TV Garden” was first produced in 1974 but the significance is still applicable today:  Paik’s audience, by viewing his work, sees content within content. First the person enters an institution specializing in art, then the audience member views media (TV segments) through a medium (The television sets). This provides an individualized effect on each person (which varies based on his or her cultural milieu and communication background) for instance, will the audience share their reaction to a friend in another language? Or tweet their reaction instantaneously? Effect that media has on people cannot be overlooked, because when the combinatory systems become so enmeshed into a unifying entity, it can blur the lines of how to define common occurrences. 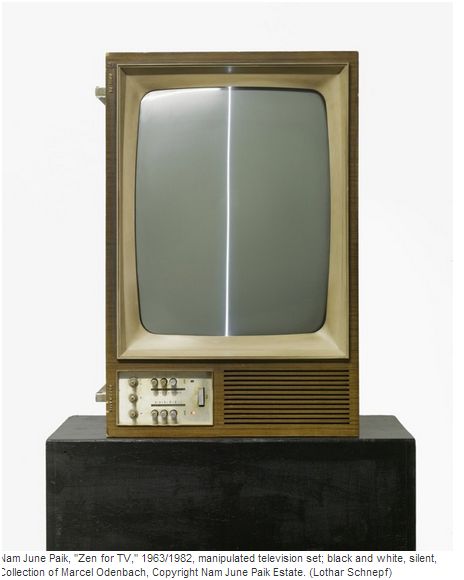 The next point that is relevant when discussing media and communication is how and if it is possible to describe art as a scientific instrument. Gitleman explicitly says that it is helpful to consider media as scientific apparatus that somehow relate to society’s general livelihood, yet we often fail to know how media “does the job” (2008, p.5).  Ping literally opens the black box, (and even turns it sideways) of the ubiquitous television set, which is so often familiarized with McLuhan’s “the medium is the message” vernacular. To some, it is simply an art form, but in my view it can become a scientific instrument when it’s used to analyze society on a macro scale or to use its “mediumness” as an empirical or historical case study.  Even though TV as we know it may be a thing of the past, with streaming-over-the-web services and the ability to watch it on a laptop, Paik and other artists’ work that involve media artefacts still have meaning and will be useful as historical tools ten, 20, 30 or more years from now. Just think of the portable CD player that was all the rage in the 1990s and early 2000s. Although they are becoming antiques, the CD player is still a form of media even though its current use is virtually nonexistent. The CD player is in the memory of millions of people around the world. This is why the CD player can be viewed as a scientific tool – its history and representation do not vanish because new media and mediums are available. 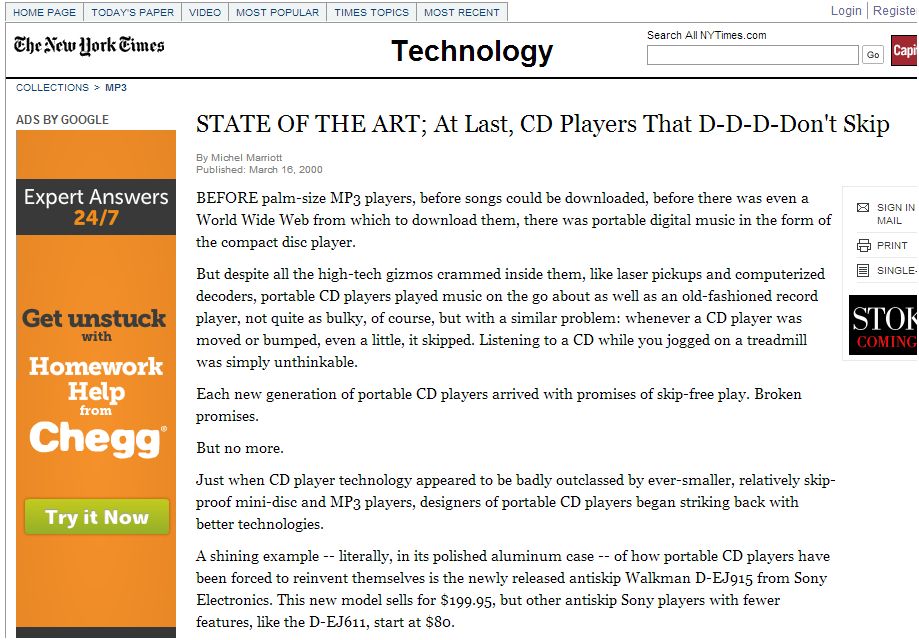 2000 NYT Article describing the revered CD player of the time

To sum up, all of this shows the power and pervasiveness that art and media retain. Using Einstein’s analogy of the master printer serving as a book seller, publisher, “indexer-abridger-translator-lexicographer-chronicler” (1983, p.60), the same can be applied to artists. Artists may be a master in aesthetics, but they can also be researchers, instructors, storytellers, entrepreneurs and architects. Overall, art, media and communication each retain power structures in their own right. McLuhan has been a highly-regarded influencer on how we should consider media, but of course, everything McLuhan has said regarding media should not be accepted as the Ultimate Truth. As long as we are willing and able to modify theories from McLuhan, Williams, Cary, etc. to fit with the times, we’ll have a better grasp on the social implications of media and combined technologies.