How Do Interdisciplinary Approaches to Cognitive Structures Modify the Communication Process?
By: Sara Levine

Interdisciplinary approaches to studying our interactions with media and technology seem few and far between. Cognitive science, for the most part, is left out. Additionally, the sciences don’t always include important external factors. With this in mind, I would like to use Shannon’s model of the communication process and Foulger’s model of the communication process as tools for exploring theories on human cognition. 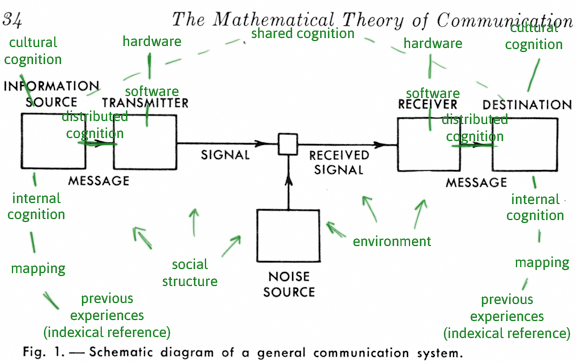 Shannon’s model reminds me of John Searle’s “Chinese Room” thought experiment from Andy Clark’s “Mindware.” We can decode the characters easily, but “symbol manipulation alone is not enough (Clark 34).” There is a lot more going on in a communication system than a simple transmit-and-receive interaction (Fig. 1). The source and destination usually manifest in human form and therefore should demonstrate a few of the cognitive processes that occur within the human mind. Humans rely heavily on symbols and symbol-oriented language. We use metaphorical structures and mapping when interacting with transmitting and receiving devices. These devices may have a certain level of consciousness because they are programmed to respond to scripts and instructions as we use them. It is also important to note that the device’s design has an overwhelming impact on the way the human uses it and thinks about how it is used. Hollan, Hutchins, and Kirsh use the example of the devices in the cockpit of an airplane. The panel that shows the pilot interacting with the fuel gauge, for example, is treated as both a symbol and as the fuel system that it represents (Hollan, Hutchins, Kirsh 185). Finally, the “noise source” should be expanded out to include environmental factors in the communication process. 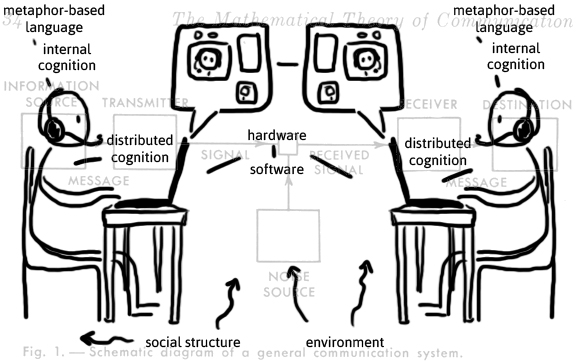 Let’s apply this infinitely more complicated model to a Skype call (Fig. 2). Person A calls Person B over Skype. They both enable video and start a conversation. There are a multitude of both hierarchical and parallel processes occurring at once. The conversation between Person A and Person B is based in English, which is a largely metaphorical language. The meaning-making processes within their minds are working to interpret sentences and to form ones in return. At the same time, Person A and Person B are interacting with Skype technology. They are navigating the Skype interface in order to facilitate a fluid communication experience. This requires Person A and Person B to interpret the symbolic structure of Skype, much like the pilots assign symbols and meaning to the devices in the cockpit of a jet. Person A and Person B’s computers are displaying their own level of consciousness in this interaction because they are following the software instructions of Skype as it responds to the situation at hand. The environment, WiFi connections, and other external factors are also important factors throughout this example of communication. These revisions to the Shannon model are not final. There are probably many other cognitive and technical processes occurring that we may not be aware of.

Foulger’s model is designed to be more applicable to media. However, it can also be modified to include several meaning-making concepts and theories (Fig. 3). Foulger does an excellent job of representing cognitive functions with words such as “imagine” and “interpret”. However, as Lakoff describes in “Conceptual Metaphor,” much of our communication is mapped onto other metaphors. Consequently, there is an entire structure of metaphorical language and symbolism that the Creator employs to distribute her or his message. The Consumer employs similar structures to interpret the message. In between those two actors is media, which functions as another symbolic architecture through which these two actors communicate. The cognition processes and structures differ depending on the type of medium and technology that produces media. Additionally, a multitude of external structures (social, cultural, embodied, etc.) affect this model as well.

A more specific example of this could be an American romantic comedy film (Fig. 4). The creator enacts the communication process even before she or he has written the script because thought is an interpretive interaction. However, she or he eventually produces the story through a visual medium. In addition to the symbolic structure of the English language, she or he has also encoded the story through the structures embedded within both film and the romantic comedy genre. The couple has a “meet cute” at the beginning of the film, for example. The editing choices for each shot hold meaning in terms of focus, timing, and composition. Perhaps all “meet cute” scenarios are shot with similar pacing. Therefore, due to an indexical cognitive learning process, audiences know how to interpret this sequence of events as a “meet cute”. Some external factors may include the history of film, the history of romance as a genre, American culture shaping the cognitive processes of audience members, etc.

These revisions are not intended as permanent alterations, but as an exploration into how cognitive theories and concepts might reflect on models of communication. My previous experience with studying communication processes was through the narrow lens of microsociology as described by Erving Goffman. He used theater metaphors to explain the seemingly mundane gestures and conversations of everyday life. Goffman used terminology such as “performance,” “front stage,” “backstage,” and “audience.” Consequently, the dramaturgical (as his theories are labeled) perspective may be another angle of approach for cognitive and communication processes. Goffman’s metaphors could even be studied under the cognitive lens as an internalized structure for shared cognition amongst sociologists. The potential for interdisciplinary exploration into the communication process seems to indicate that there is more to be discovered through further collaboration between multiple fields of research.