(1) consider a media artefact as an instance of a combinatorial meaning system (an artwork, a Website, a movie, music composition) with some features investigated in readings 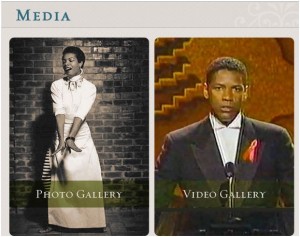 An artefact inside an artefact

Building off last week’s concepts regarding language and symbolic cognition, I was able to relate a recent experience to the concepts of symbolic cognition and human meaning-making. Last week, I attended a live discussion event by Dr. Maya Angelou at the Smithsonian National Museum of the American Indian. Angelou is frequently referred to as “a poet, educator, historian, best-selling author, actress, playwright, civil-rights activist, producer and director” according to her official website (2013). I remember growing up with her work as a child, and also coming across her work throughout college.  After digesting this week’s readings, I found it relevant to examine her website, http://mayaangelou.com/ as a media artefact. This website allows individuals to interact with her metaphorical works in a drastically different means compared to 30+ years ago when Dr. Angelou was just as influential, but could only share her work through written text (books, poetic literature) and oral traditions (speeches and conversations). She still does this now, but her website is yet another outlet. Humans are constantly looking for ways to formulize meaning through all our media channels, and as we will see the website is basically a culmination of our ancestors’ histories and symbols that have accrued over time.

Angelou’s website is the epitome of how combinatorial meaning systems work and interact with humans today. As for nearly any website, key symbolic materials such as language (English words) visuals (videos, photos, graphic designs), sound (from the videos) are presented in an orderly fashion on Angelou’s website. To the majority of users, the resources make sense because they follow proper sentence structures like “Welcome to Maya Angelou’s Official Site”. According to Deacon (1998, p.98) “creating a larger sentence in a human language cannot just be accomplished by stringing together more and more words. It requires use of hierarchic grammatical relationships, as well as syntactic tricks …” One could also argue, though, that this artefact (the website) follows a certain grammatical/syntactical flow in the form of media content just described. The videos, text, images are not arbitrarily placed on one immeasurable page; instead there is a central organization and layout of media intended to appeal to users.  This example of her website appears to follow Clark’s (2001) definitions of syntactic and semantic properties [1].

What Maya Angelou is primarily known for is her poetry, and not her website. Nevertheless, her website bears weight because other artefacts (her poems, books, interviews) are placed or inserted “on” this seemingly grandiose artefact. In Renfrew’s (1999) view, artefacts have critical roles both symbolic and practical for humans. Considering just her poetic work, the terms ‘symbolism’ and ‘metaphor’ are often associated with poetry. For Wong (2005), symbolism can be regarded as “the invention of external storage of information – whether in jewelry, art, language or tools” which dates back to the evolutionary period (p.89).  Angelou’s poetry indeed holds symbolic power in the form of literature, but also as an art form and tool she uses to express her thoughts, beliefs, and experiences. 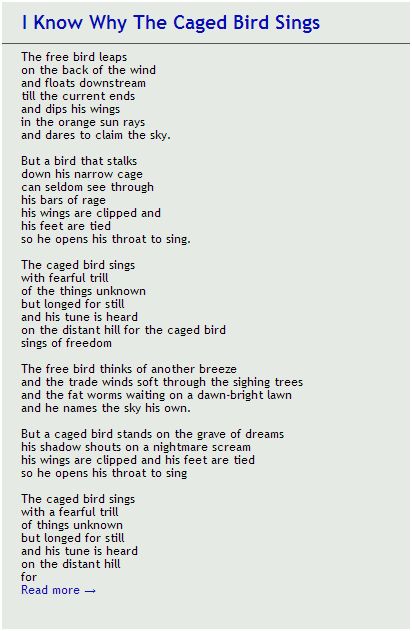 One of Angelou’s famous works

Furthermore, Angelou’s form of language is primarily metaphorical. Lakoff (2006) describes metaphors as “instances of novel poetic language in which words…are not used in their normal everyday sense” (p. 185).  Taking a look at one of Angelou’s most famous poem  I Know Why The Caged Bird Sings it is possible to apply Lakoff’s contemporary theory and conceptual framework surrounding metaphors, just like he did with the love poem that stated ‘Look how far we’ve come/ It’s been a long, bumpy road/ We can’t turn back now.” (p.189)

This poem follows similar metaphorical patterns of ‘improper’ syntax (“on the back of the wind/ and floats downstream”) but makes complete metaphorical sense in the eyes of many poets or less syntax-focused individuals. I agree with Lakoff’s point that “the metaphor is not just a matter of language, but of thought and reason” (p.192) and that language takes a backseat in these instances. Here, Angelou’s website could perhaps be seen as a depository of information that allows for the combination of multiple artefact styles. Another relevant point that can relate to the artefact of Angelou’s website is the growing field of cognitive science. If the theory of ‘distributed cognition’ from Hollan et al. (2000) is applied to this case of media artefacts, it leaves room for new insights about the unique field of interface-centered technology. The distributed cognition theory basically implies that there is a need to understand the interaction between technologies and people, furthermore stating:

“Digital objects can encode information about their history of use. By recording the interaction events associated with use of digital objects (e.g., reports, forms, source code, manual pages, email, spreadsheets) it becomes possible to display graphical abstractions of the accrued histories as parts of the objects themselves” (Hollan et al., p.187, emphasis added) 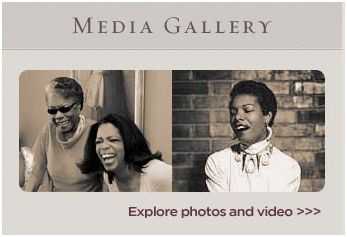 A user can explore her history through the artefact (website)

Hollan et. al (p.187) provides the opportunity to try and apply Angelou’s website and poetry to this inquiry. A website can serve as a vast depository for history and as a projector of constantly revolving information. Once put on the website, Angelou’s poetry (her metaphorical language) transforms into a digital object. Once a tangible artefact, it is now an artefact comprised of computing numbers and codes. But the end user (the person who reads her poems through a computer screen) does not need to decode the artefact in a drastically different way than before – it can still be read, analyzed, copied, etc., but in slightly different measures. No matter which environment the artefact is positioned, the “highly-enriched digital” object (p.188) is an overarching representation of her poetic ability and history. What researchers mustn’t do, according to Hollan et al., is neglect the fact that culture and cognition studies should not be separated. If someone is trying to grasp how a user interprets the poetic artefact via a second artefact (a website), culture (which is comprised of person’s history, language, customs, etc) may very well influence their cognitive functions and abilities to create symbolic systems of meaning. Some can only wonder what the Internet will look like ten to twenty years from now, but I foresee higher levels of interaction through the “graphical abstractions” between humans and media artefacts