John Searle argued in “Chomsky’s Revolution in Linguistics” that Chomsky did not explore the relationship between language and communication. However, meaning seems to have become more difficult to separate from abstract notions of language as new forms of communication come into being. Writing code and using tags are just a few forms of media that can be investigated as both forms of expression and language.

The use of code and coding language borrows many components from the basic language structure as described by Chomsky and other linguists. Code has rules, a lexicon of words, grammar, semantics, and makes use of context much like any sentence in the English language. For example, a line of code is constructed with a function and then an argument in parentheses followed by a semicolon called the “terminator”. When put together in a certain order, these statements then take on meaning in that they are issued as commands to the computer. The computer interprets this language and carries out the instructions (LeMasters “Computational Expression”). Here are a few lines of code for demonstration:

Each statement can be broken down into segments much like the syntactic structure of a sentence. The functions are the words outside of the parentheses, and the arguments are the numbers inside the parentheses. If one semicolon is missing, the computer will refuse to run the program. In the last line of code, there is a function to draw an ellipse followed by an argument for that ellipse. The argument’s structure contains the coordinates for the center of the ellipse followed by the width and height. Code structure can become more complicated as coders add IF, ELSE, and OR statements. We can study lines of code based only on these components. However, that type of investigation would not yield everything there is to know about that line of code. Chomsky revolutionized the study of language by recognizing the importance of meaning, but he seemed to neglect the semantic component of his theory (Searle). When studying the function of language structure within the use of code, it would also be important to study the semantics of the coding process. When those sample lines of code are read and carried out by the computer, they are translated into a program that the coder intended to create. The green circle it draws may serve a purpose of some sort for the coder. Taken further, other coders might borrow and “edit” that line of code to produce their own creations. This brings up the question of how to go about investigating the meaning of the code in relation to the interaction between two coders who may be simultaneously editing the code. 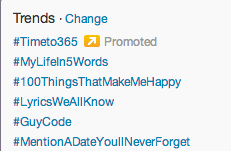 Another form of media that can be mapped out according to the basics of language structure are tags and hashtags. Although they are rarely formed as full sentences, the structure of tags adheres to certain spatial and syntagmatic rules. Tags are often found at the end of tweets and at the bottom of blog posts. A hash mark must come before it in order for it to be considered a tag. On Twitter, hashtags that contain multiple words do not have any spaces between them. For example, the tag “#MyLifeIn5Words” is trending on Twitter. The hash mark denotes the presence of a tag, and any words following that mark and between the next spacing is the tag itself. “#MyLifeIn5Words” is just an empty phrase without looking at all of the structural, semantic, and communicative work that goes into putting that particular hashtag at the end of a tweet. It is tied to the text within the tweet, the person who tweeted it, and the reasoning behind a person’s decision to tag their tweet with “#MyLifeIn5Words”. Similarly, Tumblr utilizes hashtags at the end of blog posts. Bloggers use this space to make sure that their posts show up in tags that any Tumblr user can search. If a blogger posts a picture of his or her dog and tags it “#puppy” followed by “#dog pictures” and “#I love my dog,” then anyone who searches for those terms in Tumblr will see the blogger’s post. The syntagmatic and spatial structures in Tumblr’s tagging system is different from Twitter’s structure because there are spaces between words. Bloggers can therefore form entire sentences under one hash mark. Many bloggers also use the tags to provide running commentary. Sometimes they use hash marks to emphasize a phrase. For example, here is a screenshot taken from a post made about fanfiction: 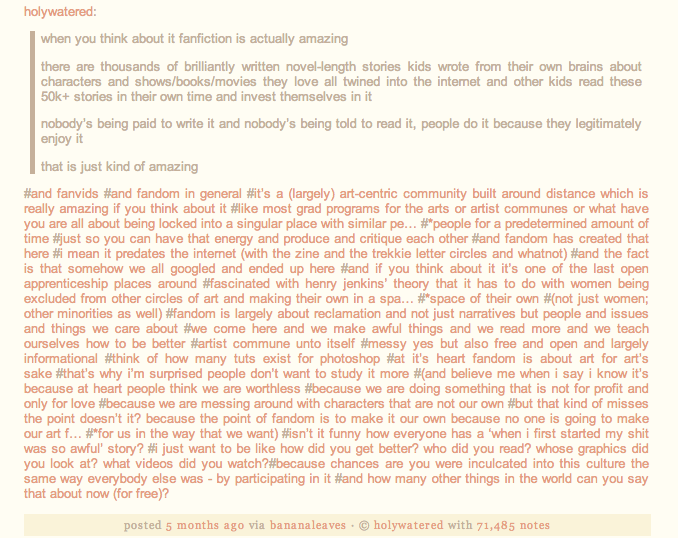 Someone reblogged a blog post, and added his or her commentary in the space reserved for tags. It is important to note that instead of using commas the blogger utilizes tags as a grammatical way to break up sentences. The hash mark signifies a pause when reading the tags. Once again, this new format for communication makes it difficult to separate the content of the tag from its context. Bloggers are using their knowledge of how a sentence works, but re-formatting it for the space under the main blog post.

Finally, there are also forms of media that deliberately destroy language structure in order to create meaning. Artists such as Pogo and The Gregory Brothers remix sounds and segments of dialogue in order to create music. These artists purposefully rearrange syntax, phonological structure, and semantics in order to produce a melody. Pogo takes short sound bites from movies and composes them into full-length songs. “Alice,” for example, features a selection of sounds from the movie Alice in Wonderland. Without knowing the context of the song, “Alice” sounds like vocals without lyrics. There is a certain structural component to the notes and composition of the piece that Pogo created, but the English language was sampled and remixed in order to construct the melody. These songs explore the idea of meaning conveyed through music. The abstract components of “Alice” by themselves do not represent the song’s artistry, message, or context. The Gregory Brothers use a similar method of remix, but they use phrases instead of sounds. Their “Auto-Tune the News” series made melodies out of phrases from politicians’ speeches and news anchors’ reports. “Bed Intruder Song,” which seems to be their most popular song to date, contains parts of a news report about a home invasion. Antoine Dodson’s commentary is auto-tuned and certain phrases are repeated in order to create a chorus for the song. The phonological structure, or how the language sounds, is fundamentally altered in order to create the song. The Gregory Brothers also change the syntax, but the auto-tune method directly affects the context of the news report. Antoine Dodson was not singing his report to the news team, but anyone who downloaded the song without context would not be aware of that. The process and culture of remix art bring in an entirely different perspective to how language is structured.

New media forms seem to possess the fundamental structures of language, which indicates that these structures are so heavily ingrained in our minds that it is imperative that they be used in most forms of communication. This brings up the fundamental question of whether there is an innate faculty that humans possess for language learning (Searle, Chomsky 120, Radford 7). The answer may lie in the study of these new forms of communication and which structural components they all have in common.