Reading about Chomsky’s views on linguistics, and the syntax-heavy thoughts behind it, originally didn’t make much sense to me. I mean, I understood what he was saying, but I didn’t understand how one could remove the meaning from a sentence. To me, especially as a writer, they’re intrinsically connected. Sentences without meaning are gibberish. Searle pointed out that Chomsky’s critics do not separate syntax and semantics. They believe that grammar starts with the meaning of the sentence, and the syntax are merely rules forming the system (Searle). I tend to agree. In the intro readings, the idea of a literate culture was brought up. Language is inseparable from writing and reading once a culture has become literate; or once a person has become literate. Chomsky would argue that even the “dumbest” kids learn their native tongue, and education teaches how to read and write. While that may be true, finding the meaning behind the written word is often left up to the reader. Once someone has learned how to read, language is spewn at them constantly. From advertisements to the newspaper to novels, people are constantly reading language. And I think in modern culture, it’s tough to separate syntax and semantics from written communication. While we all probably learned how to map out sentences in school, and to break them down by the roots and the participles, that didn’t teach us how to communicate with each other. That taught us how to “correctly” construct something. (And keep in mind, I used to be a grammar nerd copyeditor, so I love my grammar.) But language goes beyond native tongue when it comes to understanding and transmitting messages.

Chomsky’s views of native tongue and the arguments against the idea of being born with Locke’s tabula rasa made me consider the different kinds of languages that we use. We all learn how to speak differently. Even just within English, there are tons of different accents and dialects. British English sounds different than American English. Southern American accents are much different than, say, a Minnesota accent. 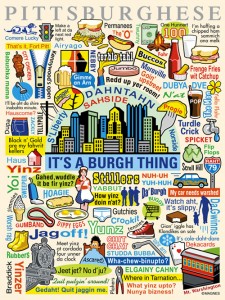 I was raised mostly in Ohio, but most of my family is from Pittsburgh. If you’ve never heard “Pittsburghese”, then you’re in for a real treat one day. Some words are literally just made up. Here are a few examples: “red up” means clean up or tidy up. “Jeet” means Did you eat? “Gumbands” are rubber bands. “Yinz” means basically you guys, or is the Pittsburgh equivalent to y’all. Spicket means faucet. Nebby means nosey. But none of this really even touches the accent. Downtown sounds like dawntawn. Steelers is really Stillers. This made me think about how we learn language. While children can figure out their native tongue, Chomsky’s point is that they only hear bits and pieces and not necessarily the greatest version of the language, and yet they still learn. However, children learn with an accent. My Pittsburgh cousins have Pittsburgh accents, but I don’t. I wasn’t immersed in the culture of place in my formative language years. However, even as a little kid, I understood what they were saying. I picked it up without having to be told what they meant – even if it’s not how I spoke or how I would chosen to get that message across. That’s just how my family spoke. Additionally, my mother was born and raised in Pittsburgh and has none of the accent or the language, but my father does. The difference is that my mother was raised by two Italian immigrants who spoke Italian in the home as well as English. Is that why? And how did she pick up both languages at the same time? How much influence do different cultural groups have on language? There’s your family, which tend to have a language of their own. Every family has their own sayings and stories. Every baby is raised with the catchphrases their parents baby-talked to them. Then there’s also the place you grew up in; the language of the place. There’s your friends and the slang of the time period you’re in. And, finally, then you have the syntax and the proper grammar language. The stuff that’s taught in schools, and how you learn to read and write. This is probably why my cousins don’t write the way they speak, which is another interesting point to understanding what a language is. If people know the “correct” way to read and write English, then why do they still speak in slang and in accents?