Written communication on the web and via mobile phones can be considered as one of the primary methods of communication nowadays, where people are increasingly using instant messaging, emails, wall posts, tweets, and other similar methods to stay in touch and exchange information. The structure and form of language used for such communications differs from standard, formal language. Most of the time, and particularly in informal situations, language used for such communication does not follow the rules and grammar of formal language. Simple examples would be using shortcuts rather than full words, like the use of “u” in place of “you”, and “i” is rarely capitalized, and so on.

However, this does not mean that emerging web language trends do not follow rules; they just follow new sets of rules. As mentioned in Chomsky’s Revolution article, the evolution of language structure happens based on the needs of communication and according to how those needs are served best. In our digital information age, where the speed of communication is a main characteristic, shortcuts and abbreviations in written language are being used to facilitate this speed. In addition, those changes are not only affecting written language, but are touching upon spoken language as well. For instance, popular abbreviations that originated in web and text messaging communications, such as “fyi” and “omg” are now being used in spoken language and have become popular and widespread in recent years especially among younger internet users.

Those changes are not affecting English and English-speakers, but also speakers of other languages. For instance, a new form of written Arabic which is very popular on the web emerged and spread with the internet. In this form, Latin letters are used rather than Arabic letters in writing, and even use numbers to represent certain Arabic letters that are absent from the Latin alphabet (for example, using “7” in place of the Arabic letter “ح”, which has a sharp H sound). This form of language is even well known among Arabs as “Arabeezyah” which is a word that merges the Arabic words for Arabic and English together. It mainly started due to the lack of Arabic alphabet on many computer and mobile phone systems, as well as English being the internet’s dominant language, where people are generally more familiar with English interfaces, and are faster and more efficient when typing in English. This language trend is so widespread that it is being used for domain names of many Arabic websites (eg: ta3beer.blogspot.com) and elsewhere. Also, Arabic speakers have adopted a wide range of new words that have to do with the internet from English. The words “post”, “admin”, “group”, “like”, “tag”, and others are all regularly used within both written and spoken Arabic conversations, and seem to have become a normal and natural part of it. 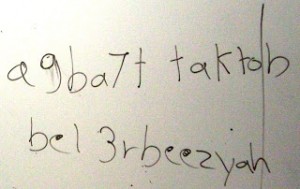 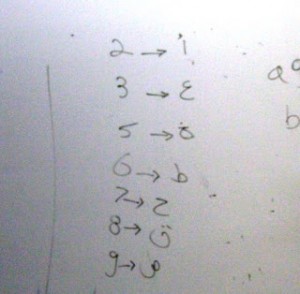